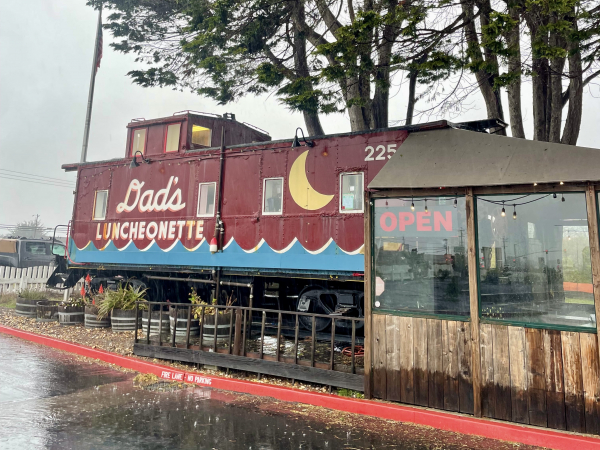 A pop-up offering "casual Midwestern grub" is taking over Dad's Luncheonette until Jan. 13 while the eatery is closed for winter break.

Billy Boss, a proud Chicagoan – from the South Side – says he's eager to bring Concession, his pop-up restaurant concept with hot dogs, Italian beef, burgers and beer to Half Moon Bay.

The inspiration behind his pop-up fare comes from a deep and long-standing personal connection to his family and geographic background, he explained in a recent interview.

Concession, he says, is "an homage to the South side of Chicago" and the sports culture he grew up in. He fondly recalls family stops at White Castle and other casual eateries on the way home from baseball games.

"That was the sacrament of our holy day," he says.

Raised by a single dad, his family was drawn together by sports – and a key part of experiencing those sports was helping run various concession stands, Boss remembers.

He began working in chain restaurant kitchens, then moved on to country clubs and finally running a bar and its culinary program in the Chicago area. Fast forward to 2015 when his then-fiancée, now wife, got a job as a traveling nurse and they relocated to California.

Traveling around the state with his wife, he fell in love with Half Moon Bay and stumbled upon Dad's Luncheonette while hiking with his dog. He says he developed a "chef crush" on owner Scott Clark and Dad's Luncheonette, and regularly visited and offered support whenever the restaurant was short-staffed.

In the meantime, he worked at San Francisco wine bar Buddy and on the side developed Concession, a pop-up restaurant offering Italian beef, burgers, beer and hot dogs. When Clark asked him if he wanted to use his restaurant space while his family was on vacation for the holidays, Boss jumped at the chance.

"We've gone full-speed into this little residency we're having," he says.

His menu, he adds, pairs that old-fashioned sense of nostalgia alongside more contemporary California cuisine. For instance, the White Castle Burger he offers comes with a housemade pickle and "chardonnayo," a mayonnaise made with wine, and his Italian beef recipe is inspired by his father's slow-roasting technique.

After the pop-up's two weeks at Dad's Luncheonette, he plans to continue selling fare during pop-ups at City Beer Store in San Francisco and is working toward launching a food truck and offering fare at music festivals.

"The more difficult it is, the more adventure it is," he adds.

Here are the hours for Concession at Dad’s Luncheonette:

This barbecue business was kicked out of Belmont. Now it's a Sunday fixture in Redwood City.
By The Peninsula Foodist | 2 comments | 4,898 views

Doing more with the natural spaces we have
By Sherry Listgarten | 8 comments | 3,508 views

Can the Memphis police behavior ever happen here?
By Diana Diamond | 33 comments | 1,764 views