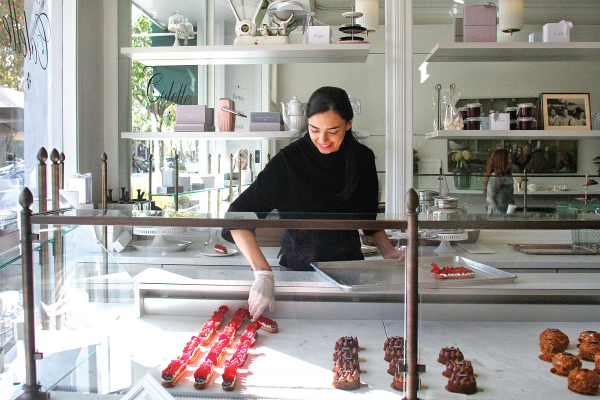 Owner Debora Ferrand places raspberry eclairs in the pastry display at Mademoiselle Colette on Nov. 10, 2015. She plans to open her fourth cafe at Atherton town center this fall. Photo by Veronica Weber.

This will be the fourth location for Mademoiselle Colette, which has cafes in Menlo Park, Palo Alto and Redwood City, which serve breakfast, lunch, as well as pastries to go. Its proprietor, Debora Ferrand, is an Atherton resident, according to a town staff report.

"Mademoiselle Colette can bring an elegant, cozy, delicious, and high quality service cafe to the residents and employees of Atherton," read the cafe's proposal to the town, which was selected during an April 20 City Council meeting.

Mademoiselle Colette will begin making $151,000 in improvements to the 250-square-foot space in May or June, and the town expects that work to take a few months, said City Manager George Rodericks in an email. The plan is for the cafe to open by early fall, he said.

The library is part of the town's million civic center project. The town plans to host a grand opening event on June 4 from noon to 3 p.m.

Ferrand opened the local company's first cafe on Santa Cruz Avenue in Menlo Park in 2015. Born in Brazil but raised in France, she attended Le Cordon Bleu and studied at the School of Alain Ducasse in France.

The cafe is located in the $19.1 million, 10,000-square-foot library, and Mademoiselle Colette plans to sign a five-year lease with the town.

Mademoiselle Colette anticipates it will initially be open from 7:30 a.m. to 6 p.m. Monday through Sunday.

How we eat away at our open space, even in Palo Alto
By Sherry Listgarten | 5 comments | 6,855 views

Three new restaurants from former Manresa chef David Kinch and his team are coming to Los Gatos
By The Peninsula Foodist | 1 comment | 4,153 views