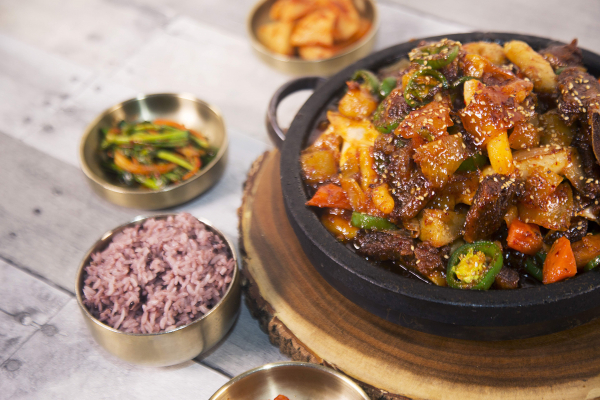 
Daeho Kalbijjim & Beef Soup has built a devoted following at the H Mart food court in San Francisco and at its quieter, but also consistently packed restaurant in a Milpitas strip mall.

Daeho is known for its kalbijjim, short ribs braised in a sweet and (optionally) spicy soy-based sauce flavored with aromatics like onions, carrots, green onions and sesame. Brought out bubbling in a large stone bowl and meant for sharing, kalbijjim creates a communal dining experience.

Daeho's kalbijjim is shared not only at the table, but also frequently on social media, especially when it is topped with handfuls of cheese and bruléed tableside with a blowtorch. The melting mozzarella is a natural pairing for the stew's spiciness and an increasingly common ingredient in Korean cuisine.

The small menu includes a few other options: a suyuk section of boiled cuts of beef ranging from fatty brisket point to cartilaginous knee bones, each served in bubbling broth so rich that it resembles milk. Along similar lines, there's also a seolleongtang section that lists ox bone soups seasoned by customers at the table. A few variations on beef rib soups, kalbitang, and options for hot stone pot bibimbap that layer vegetables on top of sizzling rice round out the menu. 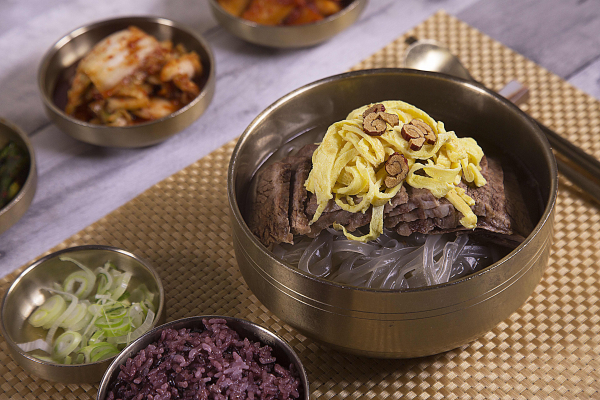 Daeho general manager Chris Lee will serve as branch manager at the San Mateo location and says the company is looking to expand across the country after building a base in the Bay Area (a Cupertino location was temporarily scrapped after difficulties finding a suitable space). The limited menu makes the Daeho concept reproducible, and Lee explains that the ingredients for the stew are carefully weighed out for each order. "We always measure the (amount of) meat, count the bones, the amount of vegetables," Lee says.

The San Mateo location will have two exclusive items, mul and bibim naengmyeon, the cold buckwheat noodles that earned their own Netflix series. It also will have larger tables for up to 10 guests and private rooms unlike Daeho's two other locations.

Daeho will have a soft opening in the next couple of weeks and should be fully open in about a month.

How we eat away at our open space, even in Palo Alto
By Sherry Listgarten | 5 comments | 6,711 views

Three new restaurants from former Manresa chef David Kinch and his team are coming to Los Gatos
By The Peninsula Foodist | 1 comment | 4,034 views