World Wrapps to return to the Peninsula with new menu, two new locations

Twenty-five years after World Wrapps was born in the Bay Area, two of its original founders have revived the fast-casual chain and plan to open two locations on the Peninsula.

World Wrapps will open at Stanford Shopping Center in Palo Alto in late January or early February and at the San Antonio Center in Mountain View in late 2021 or early 2022. Local diners might remember World Wrapps from when it operated on Emerson Street and University Avenue in Palo Alto 20 years ago. 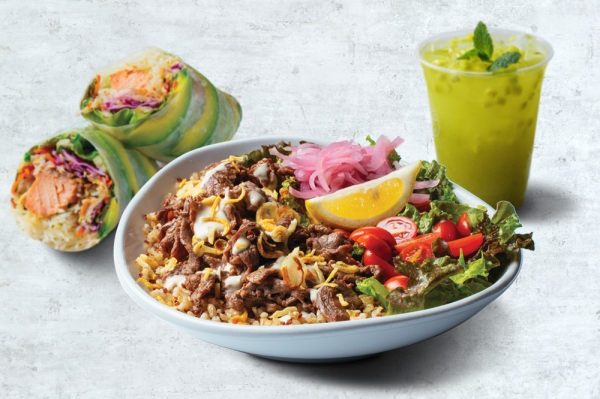 Matthew Blair and Keith Cox, two of the four owners who opened World Wrapps in San Francisco in 1995, recently bought back and revamped the company. (Cox also co-founded and owns sustainable seafood eatery Pacific Catch.) World Wrapps 2.0, as they call it, serves flatbread that's pressed fresh to order and plant-based Beyond Meat. They dropped smoothies from the menu and replaced them with boba tea, aqua fresca, horchata and mango lassi.

They reopened the first World Wrapps location in San Francisco in early 2020. When the coronavirus hit, they pivoted to donating meals to first responders, health care workers and people in need. This effort, combined with the menu's natural disposition to takeout, meant World Wrapps hasn't had to furlough or lay off a single employee during the pandemic, Blair said.

"We're very fortunate to be in fast casual right now. We have small stores. We do have dine-in capability but that's not the majority of our business," he said.

It's also allowed them to keep growing at a time when most restaurants are struggling to survive. There are now three World Wrapps in San Francisco, Santa Clara and Corte Madera. The Palo Alto World Wrapps will open next, then another outpost in San Ramon and Mountain View.

Stay tuned on opening dates for the Palo Alto and Mountain View locations.

Stacey is a registered user.


Super excited to welcome World Wrapps back to Palo Alto! I picked up take out from their Chestnut St. location last week and the menu has lots of interesting options. Our wraps were delicious and fresh. Good luck!

Report Objectionable Content
Posted by YUM, a resident of Midtown,
on Jan 8, 2021 at 8:45 am
YUM is a registered user.


Great news! How do we get Andale to come back to Palo Alto?

Report Objectionable Content
Posted by Victor Bishop, a resident of Another Mountain View Neighborhood,
on Jan 9, 2021 at 12:28 pm
Victor Bishop is a registered user.


Looking forward to it!!

This barbecue business was kicked out of Belmont. Now it's a Sunday fixture in Redwood City.
By The Peninsula Foodist | 2 comments | 5,235 views