Uploaded: Sep 4, 2020
Fresh, handmade udon noodles are the name of the game at Udon Mugizo, a San Francisco restaurant that expanded this week to downtown Mountain View. 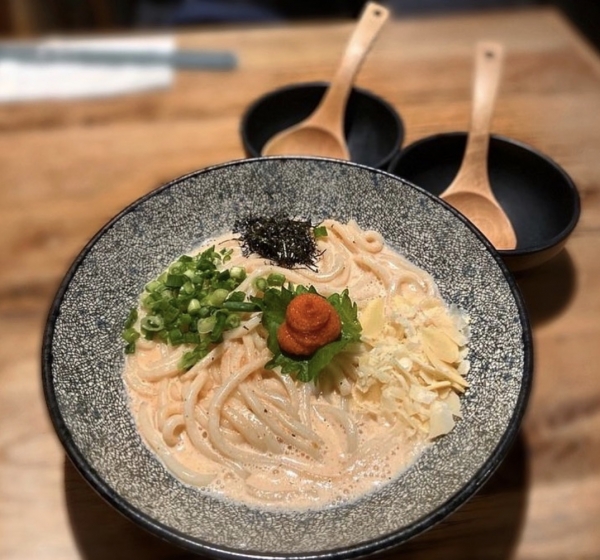 Udon Mugizo serves numerous styles of udon, including tonkotsu udon with chashu and egg, nabeyaki udon, curry udon and several kinds of cold udon. Mugizo's "signature" udon is served with cream sauces, including the one that Herrador said "people always ask for": udon swimming in an uni-based cream sauce, uni, parmesan cheese, shiso, green onions and nori. All of the noodles are made in house, as well as soba noodles, and can be customized with toppings such as fish cakes, vegetable tempura and pork belly.

Udon Mugizo is run by the same owner of Marufuku Ramen in San Francisco, which is also expanding to the Peninsula soon. Marufuku is set to open in downtown Redwood City in October, Herrador said. They're also planning to open another Udon Mugizo in the San Jose area next year.

Dan Waylonis is a registered user.


Sounds great! I look forward to trying it out. There are some very positive Yelp reviews.

Report Objectionable Content
Posted by Nayeli, a resident of Midtown,
on Sep 5, 2020 at 9:01 pm
Nayeli is a registered user.


This sounds delicious! Thank you for informing us of these things, Elena!

Report Objectionable Content
Posted by Kristine, a resident of Mountain View,
on Sep 11, 2020 at 7:54 am
Kristine is a registered user.


Hi Elena, do you happen to know if Udon Mugizo offers any gluten free noodles?

Report Objectionable Content
Posted by Elena Kadvany, a resident of another community,
on Sep 11, 2020 at 7:57 am
Elena Kadvany is a registered user.


Hi Kristine: If their soba noodles are 100% buckwheat, that could be an option! I'd call and ask.

Report Objectionable Content
Posted by Bill Stewart, a resident of Mountain View,
on Sep 12, 2020 at 11:23 pm
Bill Stewart is a registered user.

This barbecue business was kicked out of Belmont. Now it's a Sunday fixture in Redwood City.
By The Peninsula Foodist | 5 comments | 5,336 views

Can the Memphis police behavior ever happen here?
By Diana Diamond | 39 comments | 2,255 views