The 4,000-square-foot space space across from the Caltrain station has sat vacant since 2017, when chef Bradley Ogden closed his eponymous Bradley's Fine Diner. A new restaurant called Starfish was slated to open there but never did.

Kasem Saengsawang, a native of Thailand, opened his first Farmhouse Kitchen in San Francisco in 2015. The restaurant was created in the image of the food he ate growing up in Loei, a rural province in northeast Thailand. He learned to cook from his grandparents, who made nearly everything — including curry paste and oyster sauce — from scratch. He recalled taking early morning motorcycle trips with them to local produce markets. 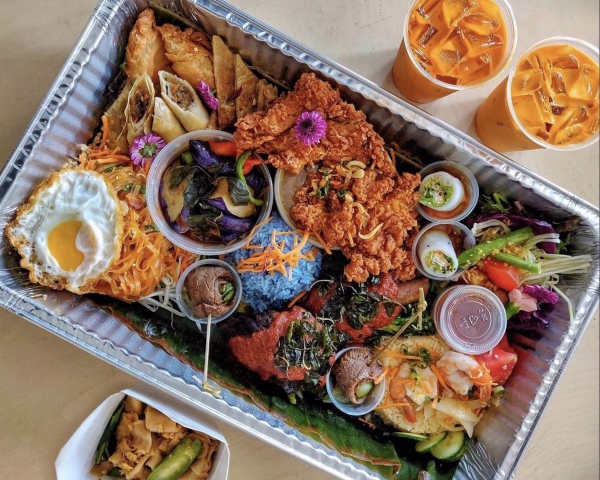 After moving to the United States to attend City College of San Francisco in his early 20s, Saengsawang started working in restaurants to make ends meet. He rose up from dishwasher to line cook and eventually opened a Japanese restaurant in San Mateo, which he later sold before opening Farmhouse Kitchen.

Saengsawang now runs five restaurants, including one in Portland, Oregon.

The Menlo Park Farmhouse Kitchen will serve the same menu as the San Francisco original but with more "formal" and "elegant" service, including a wine program and cocktails, he said. The restaurant will be open for takeout and outdoor dining only. Given the dining room's massive size, Saengsawang isn't worried about creating a socially distanced layout indoors when allowed.

Saengsawang described his style of cooking as "contemporary." The Farmhouse Kitchen menu includes dishes such as Bangkok-style herb rice in a tamarind dressing; grilled Wagyu flank steak with broccolini and sticky rice; and slow-braised, bone-in short rib served with panang curry, a dish the menu says is "reminiscent" of the large childhood meals Saengsawang would cook in Thailand for the entire family.

Saengsawang said his restaurant sales dropped to 40% the first two weeks of the pandemic shutdown. With the shift toward takeout, he told his team that they had to think of it as opening a brand new business geared toward to-go. They created new menu items, including a D.I.Y. pad thai kit and the "mini Lao table," a chef's choice meal set for two to three people that includes numerous dishes and drinks. 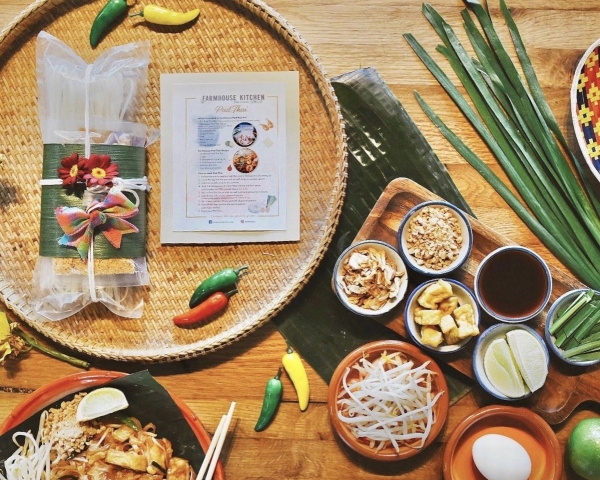 Farmhouse Kitchen also now sells a kit with the ingredients to make the restaurant's blue rice at home. (The jasmine rice gets its color from anchan, or butterfly pea flower, which Saengsawang's family grew in their home garden in Thailand.) Saengsawang recorded home cooking videos, posted to the Farmhouse Kitchen Instagram.

Saengsawang said he's requiring his employees to get tested for the coronavirus every two weeks. New precautions for outdoor dining at Farmhouse Kitchen in San Francisco include checking customers' temperatures and symptoms and limiting their time at the restaurant to 90 minutes.

"It's a lot of pain," Saengsawang said of adapting during the coronavirus. But, he added, "it turns out that people understand and are appreciating us."

The Menlo Park opening is also personal for Saengsawang: He's moving to the city with his wife and young child.

"It's going to be a real chapter (for) Farmhouse Kitchen," he said. "I'm going to be there all the time."

He hopes to open the restaurant in early September.


That is awesome news! Looking forward to the opening, and can't wait to try the menu. My household LOVES Thai food.

Report Objectionable Content
+   2 people like this
Posted by Lindsay Joye, a resident of Ventura,
on Jul 24, 2020 at 7:56 pm
Lindsay Joye is a registered user.


Hoping to get some authentic Khao Soi!


This is great news. I have been wondering what would happen with that space and I am very happy that we will be getting Northern Thai food. I can't wait to try the take out.

Report Objectionable Content
+   1 person likes this
Posted by Michelle, a resident of Leland Manor/Garland Drive,
on Jul 26, 2020 at 10:41 am


Please update us when it opens.

Can't wait to try their food.


Looks yummy! Good Thai food is a welcome addition to our area!

An extra helping: Local restaurants unite for two days of fundraising for AAPI group
By The Peninsula Foodist | 0 comments | 1,215 views