Uploaded: Jun 1, 2020
Antonio's Nut House, Palo Alto's last dive bar, is gearing up to reopen its doors this month while its owners continue to work on securing a long-term home for the business.

Ginger Atherton, whose father Tony Montooth ran the peanut-strewn, unpretentious bar until his death in 2017, said the Nut House is aiming to reopen on June 10. She and her two siblings recently assumed ownership of the 341 California Ave. bar, which will celebrate its 50th anniversary next year. 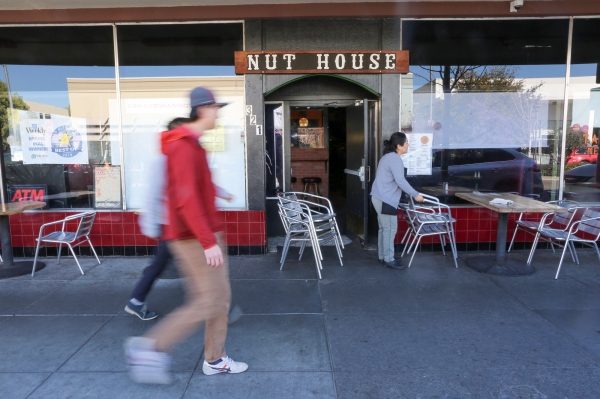 The owners of Antonio's Nut House, which has been a California Avenue mainstay for decades, are looking to purchase the property or relocate to preserve the bar, whose lease ends in December. Photo by Sammy Dallal.

They plan to move all of the bar's seating into the adjacent parking lot and partner with local restaurants and food trucks to host pop-ups, Atherton said. (They're hopeful the city will proceed with a proposed temporary closure of California Avenue to further this plan.) With the taqueria inside the Nut House closing permanently, the kitchen will be available for use.

Under Santa Clara County's revised health order, which takes effect this Friday, June 5, restaurants can reopen for outdoor dining and serve alcohol with meals, but not separately. Bar areas must remain closed.

The Nut House's future was uncertain before it temporarily closed for nearly three months during the Bay Area's shelter-in-place order. The building owner has indicated he will sell the property when the Nut House's lease expires in December, leaving the siblings to determine if they could purchase the building or move to a new location to keep the Nut House alive.

They're turning to the community to raise funds for either outcome. Atherton launched a GoFundMe campaign in May. They're also planning to sell naming rights to Nut House bar stools, billiard tables and pinball machines (no word on whether the caged gorilla will be up for dibs) as well as the chance to be featured in a new mural outside the bar. There will be a new "mug club" — buy a mug and get beer for a year — and Nut House t-shirts.

"Since Tony's passing in 2017, the dedicated staff along with Tony's Children have been fighting to preserve this ICON for the Palo Alto community," the GoFundMe campaign reads. "NOW… in 2020 faced with this devastating pandemic we are more committed than ever to saving this communities [sic last remaining gathering place and social treasure."

Moving the Nut House would cost an estimated $300,000, Atherton said. The siblings are in talks for a possible nearby location on California Avenue, but their hope is to keep the Nut House in its original home.

Several customers have also indicated an interest in helping to purchase the property, Atherton said.

The Nut House has run its course. Not a big deal whether it remains open, relocates or closes altogether. Tony's establishment had a good run & resorting to 'naming rights' is both tacky & sad.


Report Objectionable Content
+   16 people like this
Posted by Green Gables, a resident of Duveneck/St. Francis,
on Jun 2, 2020 at 1:16 pm
Green Gables is a registered user.


The Nut House has NOT run its course. Keep it in place.


@Hap:
I am not sure why you would say "The Nut House has run its course." When was the last time you were there? My family and I went there regularly before it closed, and it was always packed and lively. In a town of shiny, expensive, soul-less upscale establishments, I always felt at home there. The food was great (especially the chile rellenos) and the prices reasonable. In the plastic town of Palo Alto, it is an oasis of authenticity. I so hope they will be able to reopen at the same location. And if they do, Hap, here's an idea:
just don't go there if you don't want to!

Report Objectionable Content
+   4 people like this
Posted by whatever, a resident of another community,
on Jun 2, 2020 at 2:38 pm


Whether it's run its course or not, does not matter, it's a business, any attempt at making a go of any type of business in this dismal situation we are is to be applauded.


That's fantastic! Excited to get back to this institution when it reopens, hope that something comes through to let them stay in the original location.

Report Objectionable Content
+   7 people like this
Posted by Annette, a resident of College Terrace,
on Jun 3, 2020 at 5:21 am
Annette is a registered user.


Aw, c'mon, Hap! The Nut House is Palo Alto's Cheers. I am not a patron but I smile every time I go by there b/c it is an antidote to Palo Alto pretentiousness. I hope it survives and think selling naming rights to the bar stools is a great idea. Winning bidders could have some serious fun with that!

What to do if you get a noisy Rheem/Ruud heat pump water heater
By Sherry Listgarten | 4 comments | 2,262 views

Do Palo Alto city officials ever, ever have enough money?
By Diana Diamond | 7 comments | 1,185 views