Ghost kitchens, fast growing and controversial, offer a lifeline for some restaurants during COVID-19

Uploaded: Apr 21, 2020
Long before the coronavirus hit the Bay Area, the owners of San Francisco Indian restaurant Dosa partnered with Virtual Kitchen Co. with plans to open 20 delivery-only locations throughout the Bay Area, including on the Peninsula.

Co-owner Emily Mitra, who opened Dosa with her husband Anjan 15 years ago, was already looking for ways to expand beyond their popular full-service restaurant, particularly in delivery. Virtual Kitchen Co, founded by former Uber executives in San Francisco in 2018, provides ghost kitchens and services for restaurants to launch delivery in new areas without the costly overhead of opening a traditional restaurant.

By the time the Bay Area's stay-at-home order took effect in March, Dosa had nine virtual kitchens up and running, including in Palo Alto, Belmont and Daly City. The Dosa restaurant in San Francisco is fully closed during the shutdown, including for takeout.

"It's been very life-saving for us to have this relationship now," Mitra said. 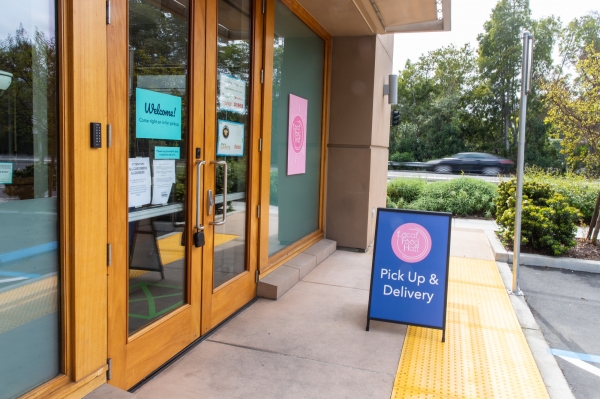 Since the shelter-in-place order forced restaurants to close their dining rooms and pivot to takeout and delivery, interest in Virtual Kitchen Co.'s services has "surged," CEO Ken Chong said in an interview.

"We've been so busy trying to help as many small businesses and local restaurants as much as possible," he said. "Restaurants are more interested than ever."

Virtual Kitchen Co. quietly opened its Palo Alto kitchen at 3441 Alma St., a former Starbucks, in January. It joined an increasing number of ghost kitchens across the Bay Area, including DoorDash's new shared delivery space in Redwood City — a fast-growing trend that reflects the tension between some restaurants seizing the opportunity to make more money in a profit-thin business and others decrying the threat that delivery poses for local, independent restaurants.

People can order Dosa's sweet potato samosas or a spicy ahi tuna poke bowl from Poki Time for delivery using third-party apps like DoorDash, Postmates and Caviar. They can also pick up takeout at the Alma Street kitchen if they live outside the delivery range.

Chong said Virtual Kitchen Co. was inspired by frequent conversations with friends who own restaurants who often said, "I wasn't built for delivery."

"Three years ago … some were doing (delivery) and some weren't but now it's become such a significant part of how customers consume and shop and get their food," he said. "We really started with a lens of, how do we help restaurant owners thrive in the delivery economy?"

Now, Virtual Kitchen Co. helps over a dozen local and national restaurants navigate the logistics and nuances of delivery, from technology to menu design and food packaging. The company charges the restaurants based on revenue on food sold, Chong says. The model allows restaurant owners to more quickly reach new customers in areas that might otherwise be prohibitively expensive to open in. Mitra, for example, had long hoped to bring Dosa to Palo Alto and looked at numerous leases over the years, she said, but didn't find one that would make opening there financially feasible.

Dosa's delivery menu is a separate brand called Dosa by Dosa, which focuses on "modern," "accessible" and takeout-friendly Indian food, Mitra said, like butter chicken with basmati rice and a kale salad with spicy tandoori tofu and farro. Mirtra said Virtual Kitchen Co. has been "hyper-collaborative" on creating the menu and using data to understand what customers in different markets want.

Dosa staff prepare all of the takeout food in a South San Francisco commissary kitchen. Virtual Kitchen Co. employees pick up the food and bring it to the satellite kitchens, where it's reheated for delivery, Mitra said.

Poki Time owner Doug Wong was also investing heavily in delivery pre-coronavirus. Last November, he announced that all three Poki Time locations in Daly City and San Francisco would convert to delivery only, allowing the business to expand to 10 new markets in just a few months.

There are now nine delivery-only Poki Time operations, including the Palo Alto kitchen, which were already up and running by the time the coronavirus hit.

"It allowed us to serve more customers when they need it the most, and we weren't trying to scramble around and figure things out during the shelter in place," he said. (His brick-and-mortar restaurant Tuna Kahuna, meanwhile, remains open for takeout only and has seen slumping sales.)

Dosa's plan to open up to 20 virtual locations hasn't slowed during the coronavirus, Mitra said,
though the commissary kitchen staff has been reduced from 150 to 35 people.

For her, the pandemic has underscored the importance of restaurants, which already face razor-thin profit margins under normal conditions, finding alternative ways to make revenue to survive. She and her husband opened their commissary kitchen in 2015 — a costly investment — with that goal in mind. The kitchen allowed Dosa to start selling pre-packaged foods and sauces at Whole Foods.

"As we look at the future we're saying, maybe this will work if we just focus more on our consumer packaged goods than the retail group because I think the writing is on the wall," she said. "We plan to keep our restaurants for sure but we really have to be focused on the things that keep the Dosa brand alive."

Thanks for the news! Great to hear it.

I imagine the next step is to include some sort of grocery delivery with the take-out. One problem with take-out is that it's only good for one meal. In today's climate, I think more families are concerned about the supply of food that isn't eaten during meals, such as milk and fresh fruit for the kid's afternoon snacks, as well as to minimize contact with others, by placing grocery deliveries that provide enough food for two weeks, not just one meal. Safeway is already taking the step of offering deli packages of pre-prepared meals good for two day's worth of meals. Restaurants should expand their offerings so that a customer can have a take-out dinner today, a prepared meal tomorrow, and food for the rest of the week.


The DOSA brand - along with its treatment of workers - has continued to degrade with each passing year. And now they want to pass off lower quality reheated food at premium prices. Hard pass!


"a former Starbuck's, in January."

Should be "Starbucks" (without an apostrophe).

Report Objectionable Content
Posted by resident, a resident of Menlo Park: Downtown,
on Apr 24, 2020 at 3:05 pm


We agree that ghost grocery stores would be a much bigger business opportunity these days. One-at-a-time meal delivery is too expensive in these days of growing unemployment. Existing grocery delivery services are overwhelmed, apparently because of their inefficient business models. Is there a way to get fresh (or frozen) produce directly from the distributors to people's homes with minimal virus-prone human contact along the way?