Bread, nut butters, homemade sausages, salsa and other foods from more than a dozen female producers will be available for tasting from 11 a.m. to 3 p.m. at the Edgewood Plaza market at 2170 West Bayshore Road. 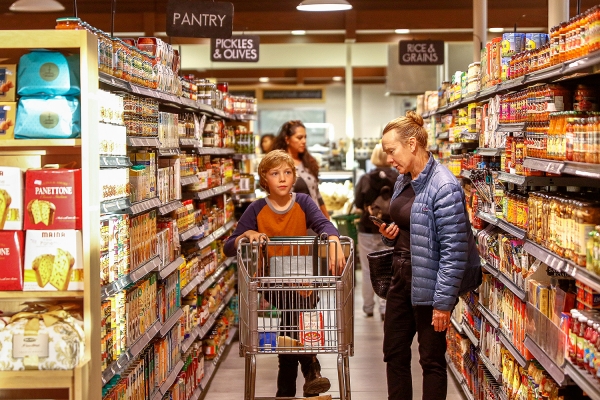 The Market at Edgewood is an independent, family-run grocery store in Palo Alto. Photo by Veronica Weber.

This is the second year the store has hosted the event. Co-owner Emel Mutlu came up with the idea to celebrate International Women's Day at the market, which itself is partially female-owned. Mutlu runs The Market at Edgewood, which opened in 2017, with her father and husband.

"We try really hard, whenever there are women that are producing products, to pay special attention to support them and contribute our part to gender equity in commerce," Mutlu said.

Some of this year's products will include:

- Naturally leavened bread, including sourdough loaves and baguettes, from As Kneaded Bakery, which Palo Alto native Iliana Berkowitz started as a subscription service in 2016
- Cashew butter with yellow aji pepper and other nut butters made by Peruvian native Guillana Glassman of Alma Superfoods
- Spice blends that Lisa Spencer of Savor Seasoning Blends makes in her East Palo Alto home
- An instant vegan version of miso soup made by Tsubi Nishitani of Tsubi Soup
- Mrs. A's Famous Salsa, which Leah and Rafael Aguayo started on the side of their full-time high school teaching jobs
- Scottish shortbread in flavors like caramelized pear tea, chai and mocha made by Scottish native Beverley Smith Bonovich of Sweet Bevy Bakery
- Fruit and nut crackers from Diane Love of Love Crisps
- Chai, masala-infused and other Indian tea blends from Rashmi Kapoor of Crave up Foods 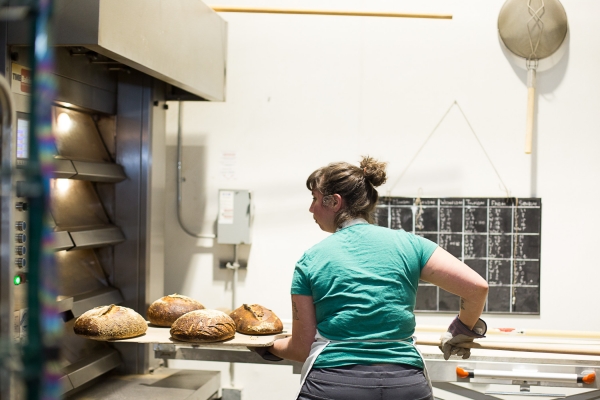 Iliana Berkowitz of As Kneaded Bakery will be one of the women featured at The Market at Edgewood's tasting event on March 7. Photo by Michelle Le.

On Saturday, The Market at Edgewood will also be offering wine tastings from women-owned wineries and the store's cheese specialist, Jessica Trujillo, will serve samples from women cheesemakers.

At a time when customers are increasingly turning to online and big-box retailers, the event highlights the potential power of smaller neighborhood markets. The Market at Edgewood was one of the first to carry Berkowitz’s breads, for example. As Kneaded Bakery is now a brick-and mortar-bakery in San Leandro and her bread can be found at Whole Foods, Berkeley Bowl and Bi-Rite markets in San Francisco as well as on restaurant menus throughout the Bay Area.

"Their gateway to scaled success, to big success is these independent markets," Mutlu said. "It's a mutual relationship. They support family owned markets and we support them. We help each other grow."

At the market's own cost, attendees who buy three of any of the products on offer will get a fourth for free.

"We don't pass that cost onto our vendors to encourage our customers to try these products and support local women-owned businesses," Mutlu said.


This sounds fantastic! As a vegan, I'm thrilled with all the choices available for me, and featuring women owned businesses is a great idea. Also, I'm glad I subscribe to this blog, I would not have known about it otherwise. Thanks Elena!

Jumping on a bandwagon that ends up breaking down
By Diana Diamond | 18 comments | 3,468 views