The menu lists ingredients like truffles, goat cheese, miso and togarashi next to cumin and chutney. Butter chicken is cooked in a sous vide machine before being thrown on a custom wood-fired grill that pays homage to Indian open-fire cooking. Cocktails inspired by Ayurveda, the ancient Indian healing tradition, are mixed in a small centrifuge machine behind the sleek bar.

"We want to change the perception of Indian food," co-owner Anu Bhambri said in a previous interview.

Rooh will open for dinner this Friday, Jan. 10, at 473 University Ave. 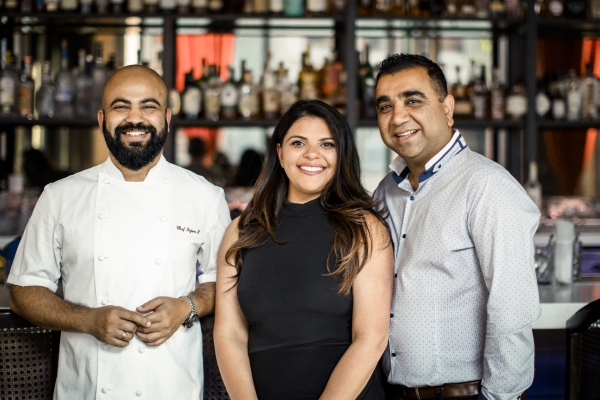 It's the latest project from Anu and her husband Vikram, who run several Indian restaurants in U.S. and New Delhi, including a Rooh in San Francisco. Their executive chef and partner, Sujan Sarkar, is helming the kitchen in Palo Alto.

Rooh is distinct from the Bhambri's other restaurants, most notably due to the open-fire grill installed at the front of the kitchen. It stretches 13 feet long and includes a tandoori oven, rotisserie, smoker as well as the grill portion. Lamb shoulder, pineapples and whole cauliflowers hung over flames while chickens turned on a spit nearby during a media preview dinner on Wednesday. Anu claims Rooh Palo Alto is the first Indian restaurant in the world with a wood-fired grill of this kind. 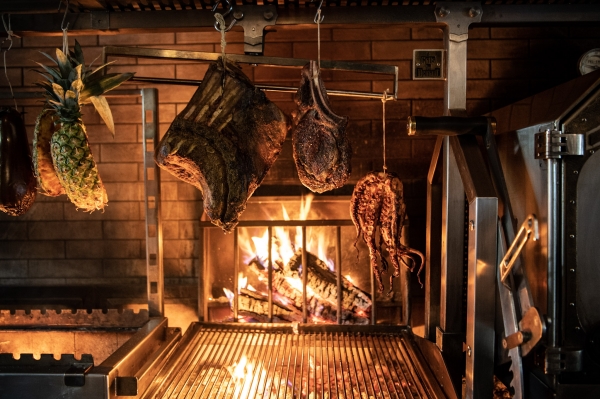 In many dishes, Rooh riffs on tradition. Kulcha, a stuffed bread, is topped with goat cheese and truffles. Their take on bhel puri, a typical Indian snack, is a bright salad of crunchy green chickpeas, puffed black rice, togarashi and slivers of radish. 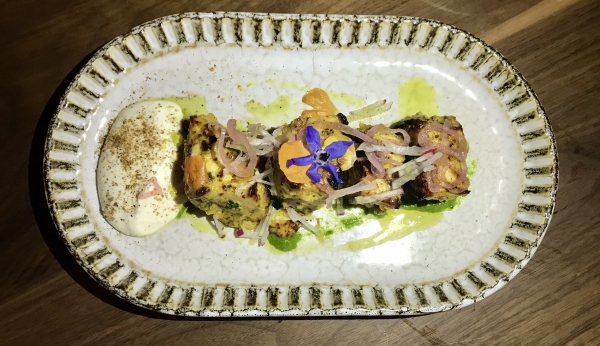 Swordfish tikka with miso, mustard and black lime aioli cooked on a wood-fired grill at Rooh in Palo Alto. Photo by Elena Kadvany.

"These are all different dishes we've seen in India in different forms and we're trying to bring them in a more refined way," Anu said.

The restaurant takes libations as seriously as food. The cocktail menu is organized around the six tastes of Ayurveda -- salty, sour, pungent, bitter, sweet and astringent -- with ingredients such as turmeric, green chickpea, black lemon salt, those smoked pineapples and kappi, an Indian coffee. Drinks are named after regional Indian slang. The "Jugaad," (slang for "get it done," a bartender said), for example, is a bright mix of mezcal and pickled raspberry. The "Pathrao, a word for "friend" in Goa, features whiskey, smoked chorizo butter and orange bitters.

The wine list includes more than 120 labels and the owners plan to add more.

The space, formerly Italian restaurant Arte Ristorante, was designed to evoke an elaborate haveli, a historical Indian building with enormous courtyards and ornate archways. Two faux plants that frame the entrance are meant to mimic mango trees, Vikram said. One wall features framed photographs of 1900's India and copper plates the owners brought back from Indian markets. A 15-foot-tall hand-painted mural of an Indian woman anchors the back of the 100-seat dining room. 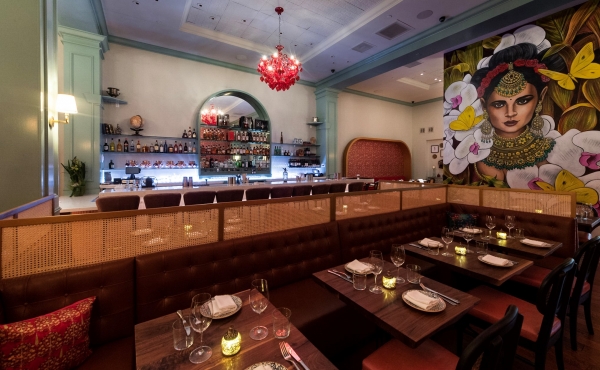 Rooh Palo Alto will serve dinner from 5–10 p.m. on weekdays and until 11 p.m. on weekends. The restaurant will add a happy hour with "a special Indian-style street food menu" in about a month.

Rooh is not the only contemporary Indian restaurant that's opening in downtown Palo Alto. Just a few blocks away on Bryant Street, Ettan is gearing up to open at the end of the month with Srijith Gopinathan, executive chef at the Michelin-starred Campton Place Restaurant in the Taj hotel in San Francisco, developing the menu.

Vikram doesn't see Ettan as the competition -- their concepts are distinct enough, he thinks -- and besides, he said, there's plenty of room for more expansive Indian food in the area.

Looking forward to trying it! "more expansive Indian food in the area." LOL, is it more *expensive* or expansive or both? :)

Report Objectionable Content
+   4 people like this
Posted by Neal, a resident of Community Center,
on Jan 14, 2020 at 11:45 am
Neal is a registered user.


Can they burn wood on no burn days?


Sorry their food is horrible in both SF and Chicago. Too Ammericanized. Frinks are good, food is horrible. If you are looking for "Indian food" this is going to disappoint.


We ate at Rooh in Palo Alto for the first time last night. It was excellent. Each of the seven dishes we ordered were fresh, imaginative and delicious. The presentation of the dishes was elegant but not self-conscious or over-the-top, and the service was friendly, informative and timely.

We identified only one drawback. The portions were a bit small, which led to a slightly unfavorable quantity-to-price ratio. This was particularly problematic with respect to the naan, which ran out well before the sensational sauces that accompanied the main dishes. While the prices at Rooh aren't crazy, they are high enough that the portions, and especially the naan, should be a bit more generous.

Still, in light of the uniformly high quality of the food, service and ambiance, this is a minor criticism. We really enjoyed Rooh and will look forward to dining there again.


We ate at Rooh in Palo Alto for the first time on Saturday Jan 18th.

Sorry, but the food & drinks in Palo Alto were disappointing. The food & drinks menu is far superior at Rooh in San Francisco.
But I agree that the service was friendly, informative and timely.

While the prices at Rooh aren't crazy, they are high enough that the portions should be a bit more generous.

We will probably not be going anytime soon.


It really sucks when he portion size are small. In another similar Indian restaurant 4 of us went and the appetizer had 3 tikkas, really small. It was embarrassing. Hopefully they will not do the same mistake


Now that they're operations, Rooh's huge wood-burning ovens are creating a health hazard and nuisance to the downtown area. Walking anywhere near it when they're burning their wood reminds me of the heavy smoke days from forest fires. Plus, with the wind, it makes it all the way to Hamilton where I live. I've written to code enforcement, and never heard back. It's really pathetic that a city that prides itself on being environmentally conscious lets a restaurant burn wood with abandon. It really needs to be shut down, or at least forced to servery abate it's smoke problem.