Uploaded: Jan 3, 2020
Palo Alto's ZombieRunner, long a draw for both running and coffee enthusiasts, has shed its dual identity. As of Jan. 1, the California Avenue business is only a coffee shop and is no longer selling running gear.

"We've been watching the coffee business grow and grow over the years," co-owner Don Lundell said. "We decided to focus all our efforts on that."

Lundell and Gillian Robinson, both ultrarunners, started ZombieRunner in 2003 as an online store. At the brick-and-mortar shop, which they opened in 2008, running shoes, hats and energy bars have always coexisted alongside espresso and chai tea. 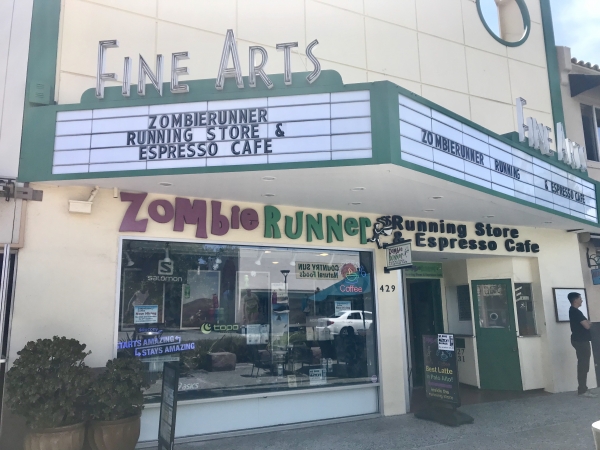 ZombieRunner at 429 S. California Ave. in Palo Alto was a combo running store-cafe for years, but will now sell only coffee. Photo by Elena Kadvany.

While the coffee part of the business has grown in recent years, the running side was "flatter," Robinson said.

"The running industry is not seeing as much excitement as we saw in the past where there were certain movements that got more people into running, like minimalism and then maximalism," she said — whereas artisan coffee has boomed in recent years.

Going all in on coffee is also helping them focus on opening their second location in Mountain View (1980 W. El Camino Real), they said. They're hopeful it will open by the end of the month but haven't set an official date.

With room now freed up at the Palo Alto shop, they plan to reconfigure the space but haven't decided how yet. If they add more seating inside, Robinson said the goal is to do so in a way that will encourage conversation between customers rather working on laptops in isolation.

"What we don't want to see happen is that silent workplace where you walk in and feel like you're disturbing people because they're busy working," she said.

They also might eventually expand the menu — including their specialty chocolate and licorice selection — and sell coffee accessories, such as grinders.

At the new Mountain View cafe, there will be pastries from a local bakery in addition to the usual ZombieRunner coffee and tea drinks.

"We just feel like we've got people so excited about our coffee and we've got really loyal customers on that side of the business," Robinson said. "It was just time to make that change and refocus on doing what we do best."


I wish Don and Gillian the best of luck with this new focus and the 2nd shop! The coffee is consistently top-notch, and Don always has great music playing in the store.

Report Objectionable Content
+   3 people like this
Posted by rsmithjr, a resident of Duveneck/St. Francis,
on Jan 3, 2020 at 1:38 pm
rsmithjr is a registered user.

Personally, I found the running gear to work well with the coffee, but I only drink the coffee.


Makes sense. I got deeper into running because of Gillian and Don and the events they hosted at the store, and felt very lucky to have found them and their store. But every time I visited to buy new shoes, the line for coffee got longer and longer, and it was clear that side of the business was doing better. They'll always be in my running mind as inspiration, though, and I hope they continue to do well.


Was a regular running store customer and loved the advice but also loved the coffee there. Hope they'll continue to thrive... Such an asset to the neighborhood!

Report Objectionable Content
+   1 person likes this
Posted by redplanet, a resident of University South,
on Jan 5, 2020 at 9:08 pm


Best to them - they have great coffee and this should be a winner. Thanks to zombie for the good coffee - can never have too much! But please zombie, don't try and dictate that people should interact. Having a place to go with a computer doesn't mean people don't interact. I find it just the opposite - I've met more people in the last decade at local coffee bars as I bring my laptop and work on my websites. I've made friends, dinner dates and to this day, people met years ago are still texting me from all over the country.


I guess the Peninsula Footist blog will stop covering ZombieRunners :)


I really hope that this decision isn't final. I predict that this is the beginning of the end. IMHO, this is too much of a departure from their brand. There is nothing special about just another coffee shop. I can understand the appeal for them to maximize profit and eliminate inventory carrying costs (and rent) but people come to a running store for coffee because they want to feel aligned with an active/running culture. Without this, there will be no draw. I think cost reduction could come from different ways of buying product, simplified product line, etc. I really don't want them to fail and leave.

'Ignoring what's wrong has never made anything right'
By Diana Diamond | 4 comments | 1,504 views

Premarital and Couples: What Does Sex Mean to You?
By Chandrama Anderson | 1 comment | 1,165 views

The 36th annual Moonlight Run and Walk is Friday evening, October 2, wherever you are! Proceeds go to the Palo Alto Weekly Holiday Fund, benefiting local non-profits that serve families and children in Santa Clara and San Mateo Counties. Join us under the light of the full Harvest Moon on a 5K walk, 5K run, 10K run or half marathon.