Uploaded: Dec 31, 2019
Village Cheese House, which has been serving deli sandwiches at Town & Country Village in Palo Alto since 1959, suddenly closed this week.

A PR company announced on Monday, Dec. 30, that Village Cheese House would be closing on Dec. 31 but that Ellis Parneters, which owns the 855 El Camino Real shopping center, hopes to find a new owner to "continue Village Cheese House's heritage at Town & Country Village."

On Monday afternoon, however, the deli was already closed, the space completely emptied out and dark. A note on the front door said it would be closed until the end of January for remodeling. Sarah MacIntyre, vice president of asset management at Ellis Partners, which owns Town & Country Village, later said the sign is inaccurate and wasn't put up by the shopping center. (It was later replaced by a Town & Country sanctioned sign.) 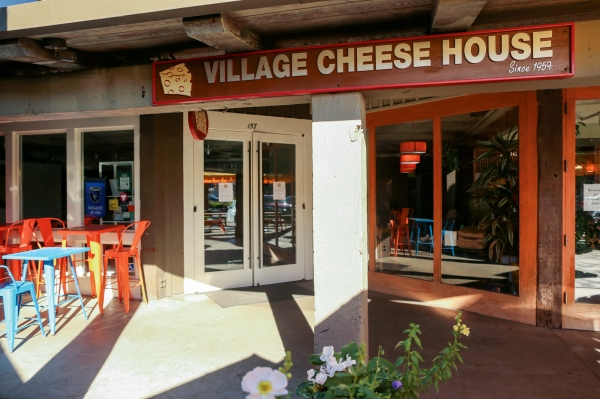 Village Cheese House has been a sandwich staple in Palo Alto for 60 years. Photo by Sammy Dallal.

The current owners of Village Cheese House, Bernard and Joni Pailma, took over the longtime business from Lindsey Hiken four years ago. (Hiken's family bought the deli from the original owners, Frank and Donald Staehnke, in 2007.) On Tuesday, Joni Pailma declined to answer questions about the closure.

The PR company said only that the Pailmas closed "to focus on other ventures.”

In an interview, Ellis Partners co-foudner Jim Ellis said "for reasons I can't really go into, they were unable to continue operating the store."

The Pailmas had several years left on their lease, Ellis said.

The couple opened a second Village Cheese House in San Jose in February, telling the San Jose Mercury News that they planned to franchise the deli. That location appears to have closed as well.

Village Cheese House has long drawn a loyal following — particularly Palo Alto High School and Stanford University students — for its housemade spread, imported cheeses and generously sized sandwiches, such as the "Double Decker" (a half pound of smoked ham and roasted turkey on three slices of sourdough bread).

Village Cheese House was the oldest food business at Town & Country Village, which has changed vastly over the last 60 years, with restaurants such as Stickney's, Hobee's and the Cook Book giving way to the likes of Gott's Roadside, Boba Guys, fast-casual poke and Telefèric Barcelona.

Town & Country Village is now looking — and has been for a little while, Ellis said — for a new operator to take over the deli.

"For lack of a better word, we're licking our wounds and focusing on trying to find a new operator to come in and operate the Cheese House because we feel that it's a very important institution, if you will, for Palo Alto, especially among Paly and Stanford students," he said on Thursday.

Several people interested in taking over the deli reached out to Town & Country just this week.

Others can still do so here.

Ellis said they're hoping to find a local operator or someone who has a connection to the business, such as a former Paly student. There's no set timeline for the process.

"We want to find someone who can take this business for the next decade and do it reasonably successfully," he said. "We're prepared to be patient to find that group or individual."


It will turn into an app development shop that produces an app for virtual sandwiches with "cookies" for dessert.

Report Objectionable Content
+   5 people like this
Posted by Is it historic, a resident of Another Palo Alto neighborhood,
on Jan 2, 2020 at 11:49 am


What is wrong with suggesting that the new owners mitigate all their impacts on the city? The city is demanding it fo Stanford. These mitigation should apply to very and any place in the city that creates new jobs.