Umai Sushi Bar is serving udon, sushi rolls, nigiri, tonkatsu curry rice and other traditional Japanese fare at 236 Castro St. It replaced Teaspoon, a milk tea shop that appears to be reopening down the street at 134 Castro St., the former longtime home of Hangen Szechuan. (Before Teaspoon, there was J Love Burger, which served fusion ramen burgers.) 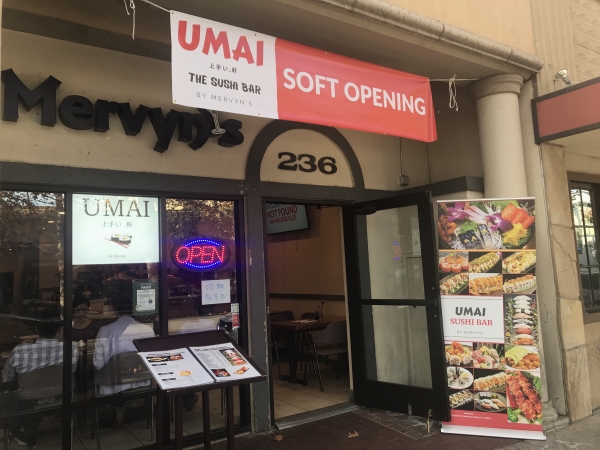 While a banner announcing a hot pot restaurant called Three Kingdoms appeared at the Hangen Szechuan months ago, a more recent "coming soon" sign now indicates an outpost of Teaspoon will open there. The address is also listed as a location on Teaspoon’s website. The owners of Teaspoon did not immediately return a request for comment.

Teaspoon CEO Wei Fan is also the founder of U.S. Boba Company in Hayward, described as the first company in the world outside of Taiwan to make its own boba. The company’s boba is served at all Teaspoon shops as well as locations of the popular Boba Guys.

I went there friday evening for dinner. Had the Nigri platter. It was very good. I plan to return since they have a very large menu

Report Objectionable Content
Posted by Ana Vazquez, a resident of Another Mountain View Neighborhood,
on Nov 25, 2019 at 10:38 am


Went in for lunch on Saturday. I had the dragon roll it was very good. Definitely plan on returning.

Report Objectionable Content
Posted by Seder Smith, a resident of Blossom Valley,
on Nov 28, 2019 at 1:10 pm


Life is good Web Link as of now to be frNK.

This barbecue business was kicked out of Belmont. Now it's a Sunday fixture in Redwood City.
By The Peninsula Foodist | 2 comments | 5,234 views