Uploaded: Sep 12, 2019
The owner of Su Hong Palo Alto gave its generations of diners plenty of notice about his plans to close the restaurant, announcing it a year in advance.

Now, that day is around the corner. The 4256 El Camino Real restaurant will serve its last potstickers, General's chicken and other beloved dishes on Sunday, Sept. 29.

King, who is in his late 70s, sold the property and plans to retire. A five-story hotel has been proposed to replace the restaurant. 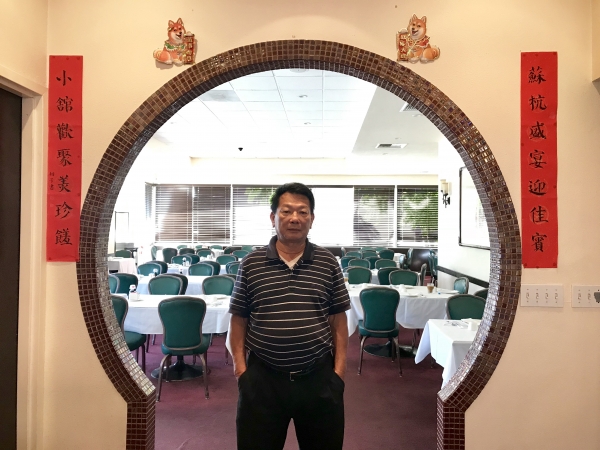 David King, a native of Taiwan, has run Su Hong restaurants since the 1970s. Photo by Elena Kadvany.

"I've devoted all my life, pretty much, (to) Su Hong," King said in an interview last fall. "I think it's about time for me to step back and step out and enjoy the rest of my life."

King said his retirement plan was expedited by economic pressures driving restaurant closures throughout the Bay Area, including a regional labor shortage and increasing costs.

About 10 years ago, King purchased the El Camino Real site, which was then a Denny's. He remodeled and opened the new Su Hong in 2010.

King's ex-wife, Bee King, sold both Menlo Park Su Hong locations in 2015. (While the new owner changed the name of the take-out location at 630 Menlo Ave. to Chef Kwan’s, he kept the Su Hong recipes and menu.)

So, somehow we got the idea that they were closing last year. Boo! we missed out on some wonderful meals! Love you guys, thanks for all the wonderful meals -- good luck in retirement.


Sad -- this was our favorite place!

Report Objectionable Content
Posted by ChrisC, a resident of College Terrace,
on Sep 13, 2019 at 11:08 am
ChrisC is a registered user.


I never saw the appeal. I had a Chinese friend say it was awful and people tell me there never were Chinese people there. I didn't like it the couple of times I tried it. I know lots of people loved it, so I'm sorry for it's demise.

Report Objectionable Content
Posted by Pretty upset, a resident of Charleston Gardens,
on Sep 13, 2019 at 11:27 am


David - thank you for being an institution in the Menlo Park / Palo Alto community for such a long time, and congratulations on completing your turn here. I remember driving over from Sun Microsystems in Mtn View at lunch to your first Menlo Park location in 1989/1990, building what was at the time one of the fastest minicomputers in the world, with one of your loyal customers who is now in her 80s and still lives in Menlo Park. Me: I'm still young (!). Over the years I've developed a deeper appreciation for Taiwanese food after visiting the island many times for work. Ever since my first visit you've been my "go to" place for local Chinese food and I've taken all my kids there. We'll miss you and wish you the best of luck. You should know that much Silicon Valley lore runs through your restaurants and you have left a great legacy.


Thank you, Su Hong! We used to grab takeout from the Menlo Park location on our way to the Redwood City Drive In.

Report Objectionable Content
Posted by Jim, a resident of Community Center,
on Sep 13, 2019 at 2:07 pm


ChrisC what motivated you to post a negative useless comment? Su Hong won many commendations for their food.
Not authentic enough? Give me a break.


I am native Chinese from Su Hang Area, which is in eastern China, by my standard, the food in Su Hong is quite decent and with authentic flavor. We will miss another staple restaurant in this Palo Alto section. In the last several years, the Olive Garden was gone, which witnessed a few events in my life. The sandwich spot, Hunan home's, donut place......, one by one they are gone. Sigh.

Report Objectionable Content
Posted by [email protected], a resident of Green Acres,
on Sep 13, 2019 at 8:40 pm

Report Objectionable Content
Posted by Su Hongs Was OK, a resident of Community Center,
on Sep 14, 2019 at 12:08 pm


> I never saw the appeal. I had a Chinese friend say it was awful and people tell me there never were Chinese people there.

^^^Not too many Chinese people (from China) ate there. Like most bay area Chinese restaurants of its time, Su Hong was geared towards Anglo-Chinese preferences.

The 'trick' to getting a good meal at Su Hongs was to dine AFTER 7PM as most Chinese restaurants 'recycle' the lunch leftovers...that is why Chinese Chicken Salad is oftentimes limper when served at 6PM compared to later and leftover steamed white rice is recycled into fried rice.

In Chinese cuisine, nothing is left to waste.


> In the last several years, the Olive Garden was gone,

^^^ Big loss. That's like mourning the closure of a Red Lobster, Chili's or a Chevy's.

Report Objectionable Content
Posted by musical, a resident of Palo Verde,
on Sep 14, 2019 at 8:16 pm

Report Objectionable Content
Posted by Patrick Hennessy, a resident of Woodside,
on Sep 15, 2019 at 7:14 am


Thank you, Mr King for all of the great meals my family and I enjoyed over the years!
We loved your food and you will be missed.
Enjoy many years to come in your retirement.

Report Objectionable Content
Posted by akaMaiNguyen, a resident of Greenmeadow,
on Sep 15, 2019 at 8:57 pm
akaMaiNguyen is a registered user.


Thank you, Mr. King and the whole kitchen and wait staff team.

Su-Hong was our go-to local Chinese restaurant. We will really miss the Wu Xi ribs! And also the nice atmosphere you created for a relaxing family meal at the end of the work day.


Thank You David, We wish you well in retirement.

Report Objectionable Content
Posted by Gale Johnson, a resident of Adobe-Meadow,
on Sep 17, 2019 at 1:00 pm
Gale Johnson is a registered user.


We ate at the one on El Camino Way several times. It was good, but nothing stuck out in my mind to distinguish it from many other good Chinese food restaurants in the area. Their fried bananas at the end of the meal is one menu item I remember the most.

Our daughter married a Taiwanese born man. Their wedding rehearsal dinner was at a restaurant on Castro St in Mt. View. Her husband's parents hosted the dinner and selected the restaurant. It was the real deal...authentic Chinese food...some of which I passed on...(I never developed a taste for chicken's feet) and it was the full blown 2 hour 12 course dinner. All the selections I ate were excellent. I don't think Su Hong ever attempted to provide that type of meal.

Report Objectionable Content
Posted by Mark Weiss, a resident of Downtown North,
on Sep 17, 2019 at 4:51 pm
Mark Weiss is a registered user.


I know another David King --who has some experience in the restaurant business -- so maybe that family will offer to buy out the real David King Su Hong and keep the restaurant alive. (I think he was just featured in the paper: "Late Night With David King".

There's also a David King jazz drummer who played at Stanford this summer, from The Bad Plus and Happy Apple. I tell you what, if Su Hong sells to David King of Palo Alto, I will donate the cost of getting David King of The Bad Plus to play the opening party.

Report Objectionable Content
Posted by CrescentParkAnon., a resident of Crescent Park,
on Sep 17, 2019 at 10:06 pm


Gale Johnson, the Mountain View restaurant ... Fu Lam Mum by chance.
I think Fu Lam Mum is the best Chinese place around. For so many years
the Chinese restaurants in the area were all above average and a good
value, but lately everyone is opening Chinese and it is actually hard to find
a good one. Fu Lam Mum is good for the food, the service, at a good price.
And they don't put too much salt on their food either.

There was a new place opened few years ago, Hong Kong on El Camino that
I still have nightmares about. We tried it out when it opened and I ordered
Chow Mein ... and what came was a solid mass of noodle with some tasteless
slimy sauce poured on it with a few random cheap veggies. Worst ever.

Good places should be trumpeted, and bad places called out.


We have been eating at Su Hong for over 10 years and will miss the King's and our favorite dishes. For those who are not familiar with Shanghainese/Szechuan/Eastern Chinese cuisine, you are missing out on the authentic flavors of what Su Hong offers its customers. I don't fault them for serving Americanized Chinese dishes like beef with broccoli, general's chicken or sweet & sour pork, if that's all Americans know to order. We never order those dishes because these are not authentic Chinese dishes...As a first-generation immigrant from Hong Kong with high standards of authentic Chinese food from all regions, Su Hong is the only Chinese restaurant we go. We will miss it.

I'm baffled with the comment above saying they don't see Chinese customers. Every time we go, which is nearly weekly for us, there are plenty of Chinese people there: young families, big family gatherings etc. I wonder when they visit...Mind you, Chinese people don't eat early. So if you are talking about dinner @ 5:30 p.m. of course you would only see older Caucasian couples...

TO Gail Johnson & CrescentParkAno, Su Hong serves those big banquet meals on request but that's not their main source of business. Chinese restaurants like Fu Lum Mun do tons of banquet so it's not fair to say Su Hong never attempted to provide these type of meals. And do be careful of Fu Lum Mun, we stop going about 10 years ago after they spilled hot water on our friends' toddler, twice.


Interesting how some folks only drink that sour-tasting Tsing Tao beer with Chinese food as it is readily offered in many Chinese restaurants.

No one drinks that swill on its own (i.e at home, at bars, barbecues etc.)

Report Objectionable Content
Posted by Long Time Fan, a resident of Portola Valley: other,
on Sep 19, 2019 at 4:25 pm