﻿ The return of Hollywood glam: Selby's to debut with steak, lobster and 'the coldest martini on the West Coast' | Peninsula Foodist | Elena Kadvany | Palo Alto Online |

The return of Hollywood glam: Selby's to debut with steak, lobster and 'the coldest martini on the West Coast'

Uploaded: Jul 2, 2019
Make no bones about it: With white marble floors, custom chandeliers, martinis made tableside and dishes like lobster thermidor and veal marsala, Selby's is a restaurant of opulence.

The latest project from Bacchus Management Group, whose restaurants include The Village Pub in Woodside, Mayfield Bakery & Cafe in Palo Alto and Spruce in San Francisco, Selby's is set to open in Redwood City on Tuesday, July 23. 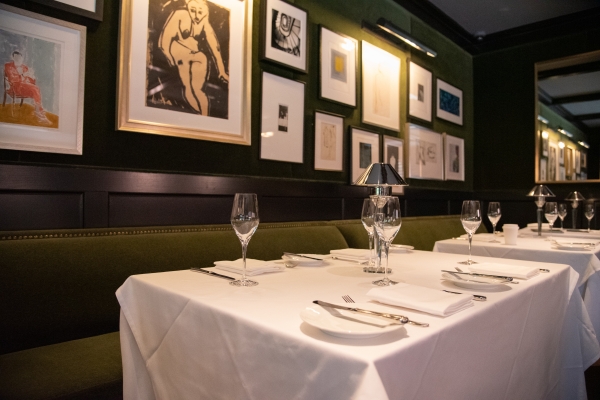 More than 125 vintage and contemporary art pieces from the Lost Art Salon in San Francisco hang throughout Selby's. Photo by Sinead Chang.

Selby's seeks to recreate the glamor of 1930s and 1940s Hollywood for Silicon Valley in 2019. Tim Stannard, Bacchus' founding partner, wants the restaurant to fill a niche for the affluent community of Atherton (despite the fact that the restaurant's address is in neighboring Redwood City).

"To a certain extent I think that Atherton lacks a clubhouse. It lacks the third place — if you're not at home and you're not at work, where do you go?" Stannard said. "We want the restaurant to be a reflection of its community."

Inside, the restaurant's walls alternate between black paneling and dark-green mohair, decorated with vintage and contemporary art curated over the last year-plus from the Lost Art Salon in San Francisco, which specializes in work by "forgotten" California artists. Photographs of Audrey Hepburn, Truman Capote, Duke Ellington and Gloria Vanderbilt hang above cocktail tables in the 26-seat bar. Bacchus hired interior designer Stephen Brady, formerly of Ralph Lauren Home, to revamp the space.

There are two dining rooms, one downstairs and one up a winding marble staircase on a second-level mezzanine. Upstairs are also three private dining rooms, including a smaller room where green felt can be pulled over a marble-topped table for private card games. The bathrooms have gold-paneled ceilings and emerald-green tiled walls. A back staircase is for wait staff to travel between the upstairs and downstairs but also doubles as a "VIP entrance" for diners who might prefer to enter more discreetly, Stannard said. 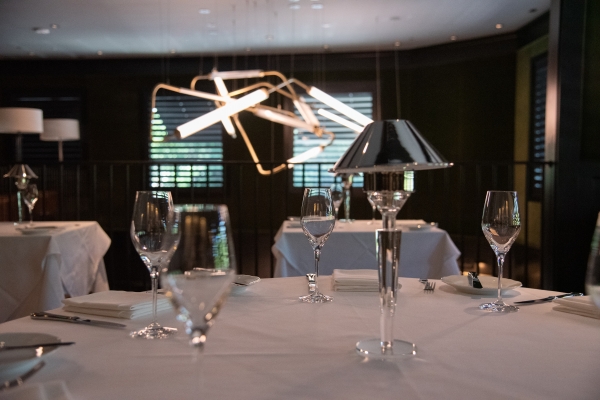 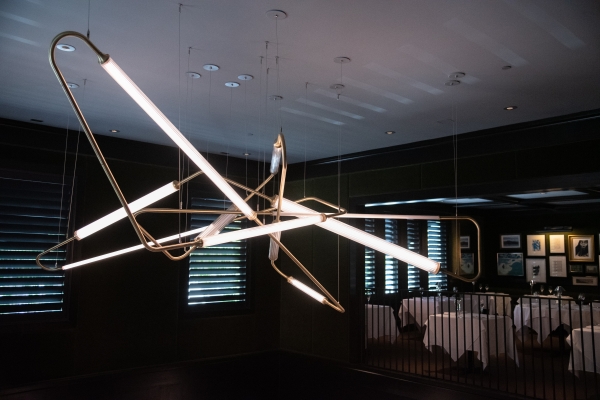 A bespoke 20-foot chandelier is on view from the upstairs dining room in Shelby's. Photo by Sinead Chang.

Selby's will serve a cheeseburger, but also caviar, oysters Rockefeller, dry-aged duck, beef Wellington carved tableside and steaks, including the "40 by 40," a 40-ounce porterhouse steak aged for 40 days. Meat and fish will be butchered in a chilled basement room. Most of the produce will come from Bacchus' private farm in Woodside, which supplies all of its restaurants. View the menu here.

"Lobster thermidor, oysters Rockefeller, dover sole — dishes like that that you really don't see anymore, which is kind of a shame because it's actually delicious food but got abandoned because it was really heavy, butter- and cream-based cuisine," Stannard said. "But the dishes themselves, reimagined for a modern, lighter palate, are spectacular."

The Selby's take on chicken vol-au-vent, for example — classically a puff pastry filled with chicken, bacon and vegetables cooked in butter and cream— is instead rabbit loin wrapped in thinly cut bacon, then seared and sliced into coins. It's served with a puff pastry cup stuffed with peas, carrots and spring onions cooked in chicken stock, crème fraîche and lemon.

Ice-cold martinis are at the heart of Selby's cocktail program. The downstairs and upstairs dining rooms will each have two martini carts for the drinks to be made in front of diners. In a quest to serve "the coldest martini on the West Coast," they installed freezers behind the bar to keep gin and vodka bottles cold up until the moment the liquor is poured into vermouth-rinsed, frozen martini glasses, Stannard said. 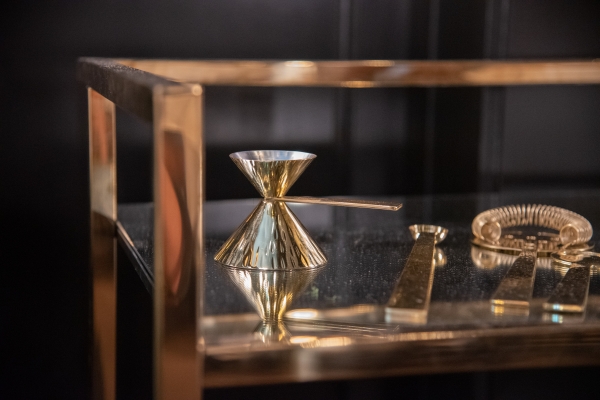 The cocktail menu will feature a handful of simple, classic drinks.

Selby's will have what Stannard says is one of the largest wine collections in the United States, with separate wine and red wine rooms that will store upwards of 30,000 bottles. The wine list will focus on vintage Italian, Spanish, French and California wines.

All of the 70-plus staff, from bussers and dishwashers to line cooks, started this Monday three weeks of in-depth training, including lectures on wine, spirits and service.

Stannard said they hope to earn "right out the gate" a Michelin star and Wine Spectator Grand Award, the magazine's highest honor. Both Village Pub and Spruce hold these achievements.

The El Camino Real space has been a restaurant since 1937, when the Italian family who still owns the building opened Johnny's, according to Stannard. It later housed Barbarossa for two decades, then Chantilly's for 43 years. With a 40-year lease, they hope to become the next longstanding chapter in that restaurant history — albeit a much swankier one.

Now I'm wondering who serves the coldest martini on the East Coast.

Report Objectionable Content
Posted by For Whom The Martinis Toll?, a resident of Duveneck/St. Francis,
on Jul 5, 2019 at 8:40 am


What type of dining clientele is this new restaurant designed to appeal to?

A preposterous Millennial 'Rat Pack' mentality or perhaps aging Baby Boomers reflecting on the late 50s to mid 1960s when they were children and too young to accompany their parents on a night out on the town?

With the advent of the 1970s, these kinds of dining establishments were OUT due to the changing times.

Will there be a dress code and/or neckties provided for those without one?

And valet parking for the countless Teslas?

I am picturing a typically slovenly albeit well-moneyed 'techie type' wearing a faded t-shirt with neck tie reluctantly sipping a very 'cold martini' after being informed that the restaurant's artisan beer selection is extremely limited.

OR perhaps this restaurant will cater to the recently arrived wealthy immigrants from overseas as part of a post Americana assimilation concept.

Report Objectionable Content
Posted by Dean Martin, a resident of Another Mountain View Neighborhood,
on Jul 5, 2019 at 12:54 pm


Hey, look at me everybody, I'm Dean Martin. Let me just put some bossonova on the Hi-Fi and we can all bug out. Now, who wants a martini?

Yah. No interest at all. Been there, done that. Swinger's was a cool movie but these days Vince Vaughn is just collecting DUIs.
I can't wait until places offer cannabis rather than alcohol.

Report Objectionable Content
Posted by A Time Warp That Won't Endure For Very Long, a resident of University South,
on Jul 5, 2019 at 1:45 pm


Strictly a novelty restaurant theme. Being from LA, even the Brown Derby faded into oblivion. No one cares anymore & younger drinkers are not into cold martinis.

People are also trying to eat healthier nowadays. Steak, lobster and cream sauces are for those whose days are lost in yesteryears.

Mink jackets, pearls and hairspray? I don't think so Tim.

This restaurant is destined for failure. Just watch.


Report Objectionable Content
Posted by Looks interesting, a resident of Atherton: other,
on Jul 6, 2019 at 11:15 am


We're going to try it. I think a restaurant that offers a classic menu, with a dressier ambience, would be a refreshing change of pace.

Report Objectionable Content
Posted by Suave & Debonair With Elegance, a resident of Portola Valley,
on Jul 6, 2019 at 12:33 pm


@You Can't Go Back In Time

In terms of a temporary fashion statement...yes you can.

Selby's opening will be good for the men's formal wear business.

Women will now be able to wear their grandmother's mink/sable/chinchilla coats to dinner and PETA won't have a thing to say about it.

Pearls will also be making a comeback. Maybe even white gloves.

This is all so so Vogue Magazine!

Add the Playboy After Dark 60's concept as well.

Report Objectionable Content
Posted by Eater, a resident of Mountain View,
on Jul 6, 2019 at 12:46 pm


Granted that disparaging untried restaurants offhand, on purely theoretical grounds, is traditional in these comments pages Web Link -- still, the commenters doing so above (right on schedule) for this new restaurant seem completely unaware of the Bacchus Management Group's remarkable track record. This is an organization led by people who grew up in the restaurant industry and have demonstrated amazing sureness of touch over the last couple of decades, shrewdly choosing new concepts and executing to plan. I didn't guess that cozy clubby retro fine dining would be their next venture, but I know too much (about their other restaurants) to write it off.

Might not appeal to young adults who go for boba tea and Poke, but those customers aren't visiting white-tablecloth restaurants of any kind anyway, so they don't even figure in the calculation. Besides, Selby's fills the space of an old-school restaurant mourned by its regulars, so it may fill a ready-made demand too.

Report Objectionable Content
Posted by Time keeps On Slipping Into The Future, a resident of Menlo Park,
on Jul 6, 2019 at 1:28 pm


*thinking* The people who used to frequent these kinds of dining establishments are either deceased or pushing 100 years of age.


Sounds like a reasonable dining environment for the moneyed, arrogant types who enjoy putting on fronts.


I wish some restaurant group would re-open Charlie Brown's in the Redwood seaport. I loved that location and place. Common on you restaurant groups - get us next to the water.

Report Objectionable Content
Posted by Jen, a resident of Atherton: West Atherton,
on Jul 7, 2019 at 2:31 pm


It sounds similar to an updated version of BIX in the Financial District. That one's been around for a long time, and has always pulled in a varied clientele, including young professionals looking for a cold drink after work. (Perhaps that's why there's a burger on the menu.) Looking forward to trying out Selby's soon.


The name Selby's comes from it's location on El Camino - it is across the street from Selby Avenue going into Atherton. I can see how this would be a great location and place for the locals to hang out.

Report Objectionable Content
Posted by Another DUI Zone, a resident of Atherton,
on Jul 8, 2019 at 1:43 pm


> The name Selby's comes from it's location on El Camino - it is across the street from Selby Avenue going into Atherton. I can see how this would be a great location and place for the locals to hang out.

^^^It will also be a good area for Atherton PD to rack up some DUIs after some diners have had 3+ of the 'coldest' martinis on the West Coast. That strip of ECR between 5th Avenue & Menlo College will be ripe for catching a few inebriated speeders going well over 35 mph.

Back in the heyday of the BBC & The Oasis, Menlo Park was a DUI goldmine.

Report Objectionable Content
Posted by A Return To Yesteryear...Not, a resident of Woodside,
on Jul 8, 2019 at 7:10 pm


One feature Selby's probably won't have is the older and tenured professional waiters one experienced at these types of restaurants back in the day. Granted it's a new dining establishment & chances are there won't be any waiters in their late 40s to early 60s...just some 'know it all' Millennial food servers who were briefed on the process.

Report Objectionable Content
Posted by gin, baby, a resident of Atherton: Lindenwood,
on Jul 9, 2019 at 6:09 pm


I do not want the coldest martini; I want one that stays cold.

As for those vodka based monstrosities, who cares, they're not martinis. They just pollute an otherwise useful glass.