Uploaded: Apr 12, 2019
After about a year of operating in downtown Mountain View, wine bar Le Plonc is opening two new locations: one in Sunnyvale and another in Melbourne, Australia.

The 331 Castro St. wine bar is planning to open at 279 W. Washington Ave. in Sunnyvale in May and in Melbourne the following month. 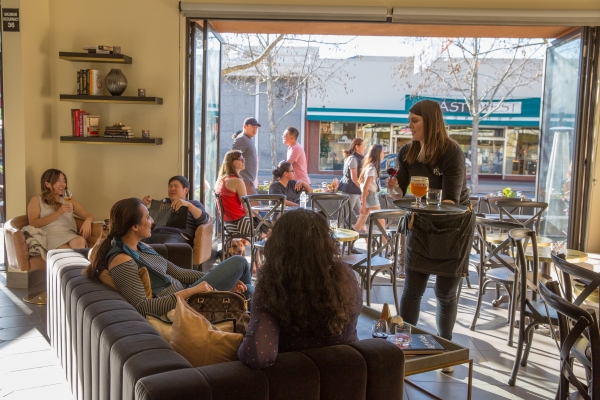 Open and airy: inside looking out at Le Plonc on Castro Street in Mountain View. Photo by Natalia Nazarova.

Kristian Cosentino, owner of The Rusted Mule and the now-closed Dirty Water in San Francisco, opened Le Plonc to serve high-quality, unusual wines at affordable prices. Cosentino left last June, however, "to pursue other opportunities," the Le Plonc team wrote in an email. Dirty Water closed last July; Cosentino told Hoodline at the time that he faced monthly debt payments as much as $45,000 above his cost of operations.

Executive chef Michael Jarrett and general manager Natalie Tran are now overseeing Le Plonc while other owners who have been involved since the beginning continue to run the business — including one who is from Australia, hence the expansion there.

The menu at the Sunnyvale wine bar will largely be the same as in Mountain View with some customizing to that neighborhood, the team said. The spring by-the-glass wines includes four sparkling wines, five whites, one rosé and five reds, including a "standout" Zweigelt made by an Austrian female winemaker, Judith Beck. Plus, there are wine-based cocktails and a few beers.

In addition to wines by the glass and bottle, Le Plonc serves food, from oysters, cheese plates and tartines to a roasted duck confit entree and off-menu white truffle and mascarpone agnolotti.

Le Plonc is celebrating its one-year anniversary with a series of events in April and May, ending with the opening of the Sunnyvale wine bar.

When Le Plonc opened, the wine was affordable, $7 per glass. The food offerings had a steep markup, even for Mountain View standards. Recently, Le Plonc got rid of the affordable price tag on all of it's wines. $14-18 for a glass. Even San Francisco charges less per glass, and one expects to pay more in a metropolitan city.

Report Objectionable Content
Posted by Le Plonc, a resident of Mountain View,
on Apr 19, 2019 at 9:31 pm


We are certainly thrilled to make Sunnyvale our second home. With regards to pricing, we initially negotiated a heavy discount on our wines when we first opened such that we could introduce interesting varietals of European wines to Mountain View at the ridiculous price of $7. Like all good things, the discount came to an end and we were no longer able to support the initial price. The good news is that at $10, our pricing continues to be some of the most competitive in the Bay Area. We also have some additional selections at $14 and $18 due to requests from our guests.

It's also worth mentioning that Le Plonc is not just about affordable wine but also the beautiful cheese and charcuterie plates, comfortable interiors, sensual jazz and wonderful ambiance that our guests have come to love.

We are excited about our grand opening in Sunnyvale in a few weeks and hope that you can all come and enjoy a glass of our latest wine - Zweigelt from Austria by Judith Beck - with us.

I Was At The Stanford Shooting. Let’s Do Better Next Time
By Laura Stec | 2 comments | 3,085 views

Some of the best jobs around
By Sherry Listgarten | 4 comments | 2,438 views

People and Relationships Never Stop Being a Work in Progress
By Chandrama Anderson | 1 comment | 1,359 views