View all posts from Sherry Listgarten

Uploaded: Mar 31, 2019
Where is the closest oil well to your home? Or your kid’s school? Is it leaking? Does anyone know? California is like a pin cushion for oil wells, and abandoned ones are not actively monitored. Is any gas coming out of them? And how much? That is a question that a grad student at Stanford is trying to answer...

Eric Lebel is a PhD student in Rob Jackson’s lab, where he studies methane leaks. His interest in this area developed gradually. Eric grew up in upstate New York and attended Providence College in Rhode Island, where he studied biochemistry and music. After a few summer internships, working on biomass one year and plastics another, an experience in southern California after junior year captured his heart. As an intern in NASA’s Student Airborne Research Program, Eric participated in numerous research flights out of Armstrong Air Force Base, sampling the air to measure the concentrations of various gases while flying at 500 feet or 35,000 feet or even spiraling between elevations. In senior year, when he had to choose between his two loves -- music (organ and choir) and science -- he figured it was more practical to do science as a career and music as a hobby than the other way around. And off to Stanford he went! 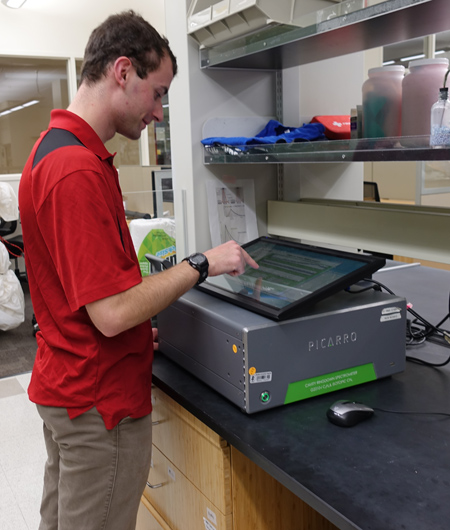 Eric working in his office at a gas spectrometer, which analyzes emissions.

Eric’s research into gas leaks has two main branches, one focused on abandoned oil wells, and one on home water heaters.

In 2016 Mary Kang, a former postdoc from Rob Jackson’s lab and current McGill professor, found that emissions from abandoned wells in Pennsylvania constitute a surprisingly large 5-8% of all anthropogenic methane emissions from that state. (1) Eric wondered, how are California’s old wells faring?

California has about 120,000 abandoned oil and gas wells, which the Department of Conservation has published for us on an interactive map. Take a look at the idle (purple) and abandoned (grey) wells littering a residential area of Los Angeles. You can zoom in, or click on the wells to learn more. In our area, you can find wells in La Honda and Half Moon Bay. If you see a green well, that is an active well. Check out the full well finder along with instructions here.

According to a process regulated by California’s Department of Conservation, abandoned wells are plugged and then buried. They are often plugged more than once, to prevent contamination between geological layers. For example, there might be a plug in the middle, to separate gas from water, and another near the surface, to protect the air. But are the plugs effective? Eric and his crew set out to take measurements. They use state records to identify wells, opting for a variety of well types (abandoned vs idle, recently idle vs older, dry vs productive). Then they go look for them. 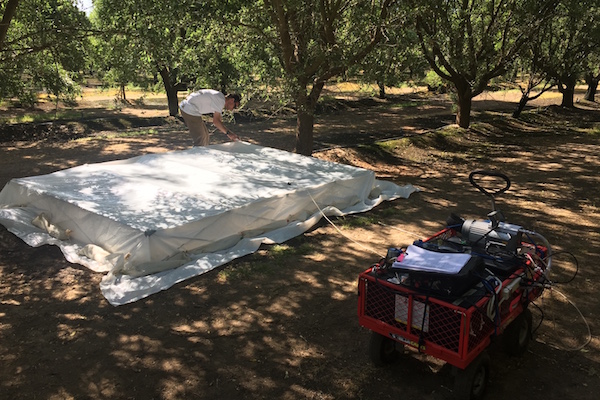 Here Eric is setting up a chamber over a buried well in Bakersfield, in preparation for measuring. In front, in the wagon, is the gas spectrometer used to analyze the emissions.

Finding the wells is a bit like geocaching, since all Eric and his team have are coordinates (which are usually inaccurate) and a general description. The wells themselves are often invisible, as they have been buried per the abandonment process. So Eric uses a magnetometer to close in on the well. Abandoned wells have no monitoring, so the emissions measurements they gather for these wells are new information. Eric doesn’t have results to share with us yet -- this research is ongoing, with the team having examined about 100 wells to date. 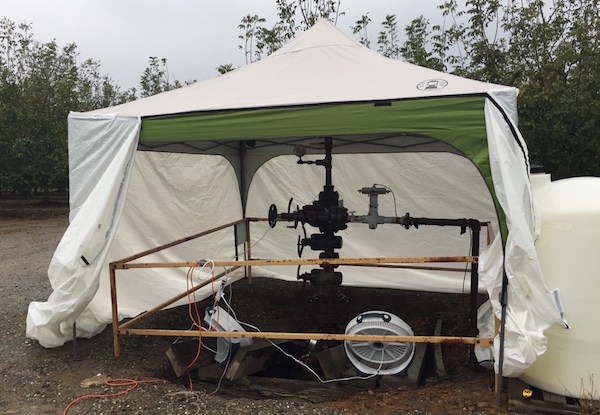 This photo shows an idle well near Chico that has been tented and is ready to test.

The second branch of Eric’s research is focused on residential water heaters, which represent about one-third of residential gas use in this area. (2) Previous research from Lawrence Berkeley National Labs shows that relatively few heaters emit the bulk of emissions (they exhibit a so-called “long tail” distribution, as do the wells), and that pilot lights are a surprisingly large factor. (3) Eric’s group is expanding on this research, and in particular looking at the difference in emissions between storage (tank) water heaters and instant (tankless) water heaters. 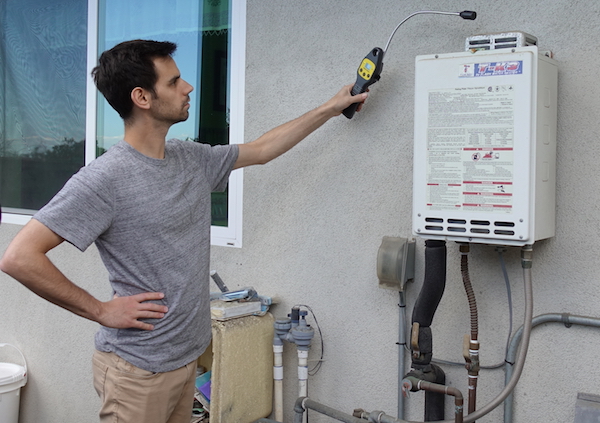 Colin Finnegan, a Research Assistant and colleague of Eric’s at the Jackson Lab, measures methane emissions from a tankless water heater.

They have looked at water heaters in about 30 local homes to date. They measure heater exhaust (sometimes on the roof, sometimes in the home) when the heater is operating and not operating, or turning on and off. They then analyze those measurements together with the usage rates of the different types of heaters, which they capture using loggers. 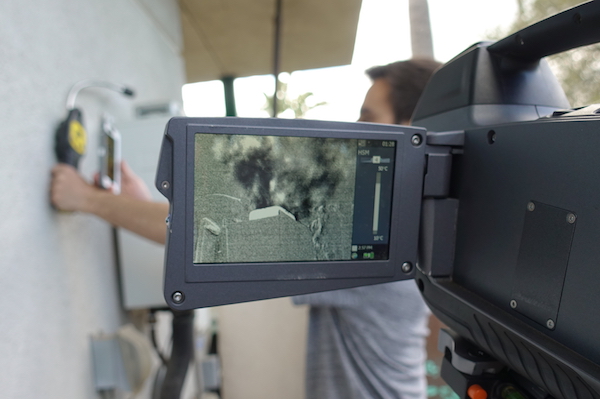 Though our eyes can’t see the emissions that Colin is measuring, Eric’s FLIR camera is able to capture them, as you can see in this photo. Black represents methane.

Eric and his team want to know how much methane is emitted by these appliances, and what characteristics correlate with higher emissions. Because there are so many water heaters, even small amounts of methane make a difference. A challenge for Eric and his team is to get significant results despite the variability in heater construction and installation. (4) 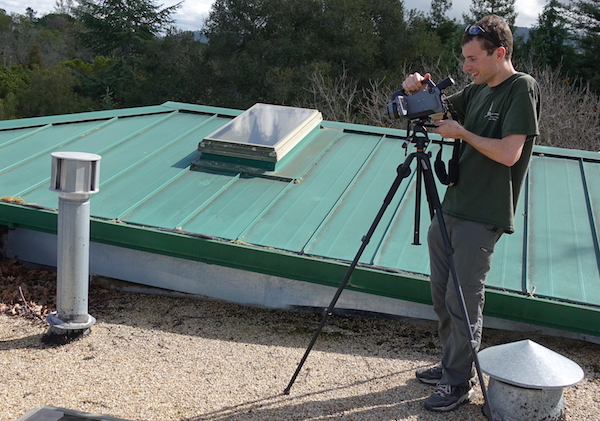 Eric is setting up his camera to view emissions from a chimney venting a furnace.

Eric would love to see more incentives for people to find and detect leaks, since there is a small set of big leaks generating most of the emissions. Many tech companies have reward programs for finding security bugs. Does the state have resources for a “leak bounty” program? Eric is also interested in some of the new drone-based technology for detecting leaks, particularly in harder to access areas. (5) I hope that Eric will be able to share some of his results with us later this summer.

I asked Eric if he finds that people care about methane emissions and climate change. His response was “Well, some do, especially out here. But there are definitely areas where people don't care enough, or they care but don't know what to do about it. It can be hard, since climate change is pretty abstract. In my hometown, there are people who care about climate change, but don't necessarily connect the dots between the warming planet and their water heater's methane emissions. More direct consequences of leaks such as health, safety, or a higher gas bill seem to resonate more with most people."

If you enjoy music and singing, Eric’s choir has a performance on May 31 at Memorial Church on Stanford campus. Information and tickets are available here.

Update (April, 2020): You can find the results of Eric's studies here.

1. Mary Kang’s paper can be found here, with a good overview in Stanford News.

2. For a quick snapshot of where Palo Altans use gas, see the graph on page 25 of the 2016 Palo Alto Sustainability and Climate Action Plan.

3. This paper on residential methane emissions is pretty technical, and behind a paywall. But you can read the abstract...

4. For reference, the tankless water heater shown in the photos and videos in the blog post is a Takagi TK-3 that was installed in 2007.

6. Want to know more about oil and gas wells in California? Fracking? Well stimulation? Groundwater protection? The Department of Conservation’s Division of Oil, Gas, and Geothermal Resources (aka DOGGR) has a very good online FAQ.


Thanks! I'm glad you find them interesting. I was amazed to see how many wells there are, and in dense urban areas, even underneath schools. And I love the videos from Eric's camera, which allow you to visualize the methane emissions. If only we could see them with our eyes -- detecting and reducing emissions would be so much easier! I also hope to cover more of the work happening at Stanford, which is so close and so interesting. Eric was great to talk with.


When Shoreline Amphitheatre opened we were sitting on the grass and a flame came up from the ground. Person lighting a cigarette. That whole area is built on a landfill. And when they were planting new trees they died because of the methane gas in the ground. I believe that they have harnessed what ever effects of methane there still are but building on landfills has a predictable result.


@Resident1 -- Whoa, you were there! That is wild. If you want to learn more about what caused it, check out the fourth case study at the bottom of this page. (It is a pdf download, so I can't link directly to it.) Apparently they didn't put all of the waste below the membrane. Oops.

If you are worried about gas from landfills, think about our natural gas infrastructure, which covers much more area and has leaks aplenty. It's kind of eye-opening.