View all posts from Sherry Listgarten

Uploaded: Mar 17, 2019
The question that I was asked the most when I started this blog was: “Can you please find out what is happening with our recycling?” There has been a lot of anxiety since China enacted its “National Sword” policy in January 2018, effectively shutting down imports of recycled plastic from the US. It’s a great question, and I hope to get to it soon. For now, continuing the mini series on methane, I want to at least assure you that composting your yard waste and food scraps is working very effectively. And locally!

Depending on where you live, your compost will be processed somewhat differently. GreenWaste, which I will cover in this blog, handles Palo Alto, Portola Valley, and Woodside. Recology handles Atherton, Menlo Park, and Mountain View. But the basics are similar. (1) 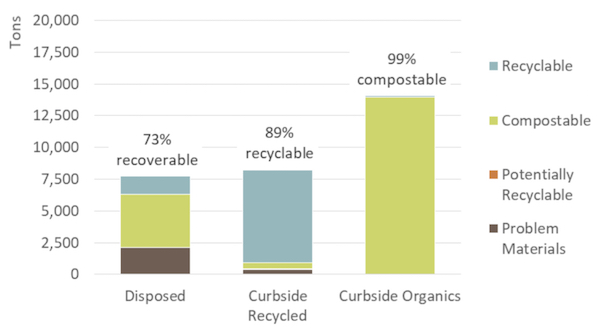 To show you that the composting process really does work, I took some photos of it, starting with what the green bin contents look like. Hang in there, the photos get a lot nicer as the composting progresses...

GreenWaste takes the green bin contents to a facility in San Jose called ZWEDC (the Zero Waste Energy Development Company, operated by Zanker and GreenWaste). The mixed organic loads (food plus yard waste) are dumped onto the floor of their facility, as shown below. On the left you can see a load from Palo Alto residences. In the middle is a load from Palo Alto commercial pickups. You can start to see some contaminants there, like plastic bags. On the right is a large load from San Jose commercial pickups, where you see even more contaminants, such as the styrofoam near the bottom. 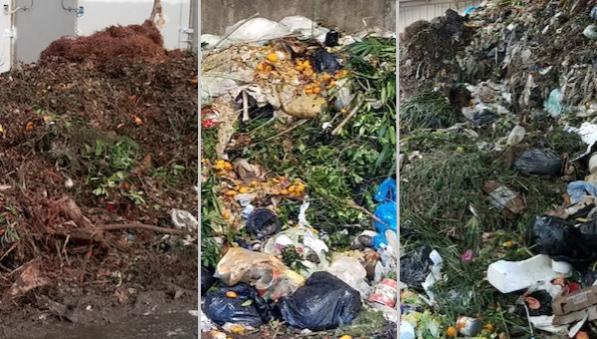 These loads go through a first phase of processing that opens bags, sorts out contaminants, and screens out the finer organics before the larger items are compacted to reduce moisture content. Here is what the screened material looks like, with residential on the left and commercial on the right. 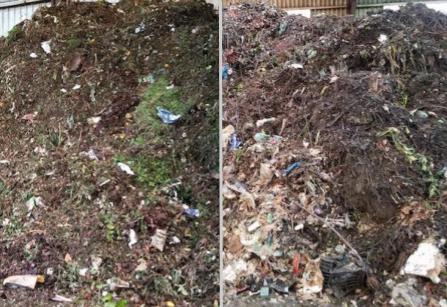 At this point, the processed loads are moved into one of 16 digesting chambers, each of which can hold 350-400 tons. 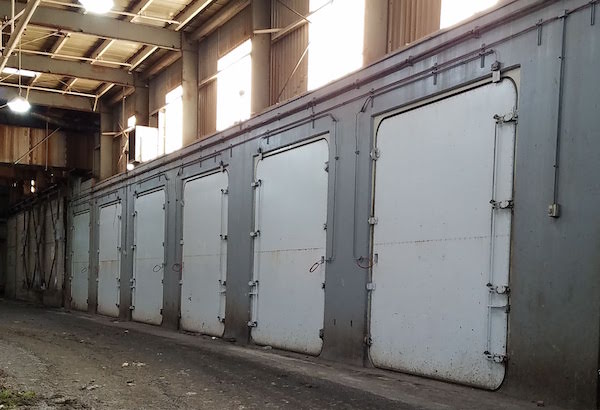 The material remains in the chamber for 21 days. In the beginning, air is blown in and the contents start to break down, causing them to heat up. When the internal temperature reaches 132F, the air is turned off and a heated fluid called percolate is periodically sprinkled inside. The percolate contains microbes that digest the organics and produce methane. (2)

Fans pull the methane through large pipes over the roof of the facility to a cogeneration plant. The plant generates 1.6 megawatts of electricity, as well as heat for the percolate. The digesting facility uses only 330 kilowatts, so 1.3 megawatts is sold back to the grid through a contract with PG&E. That is enough to power over 1600 California homes. 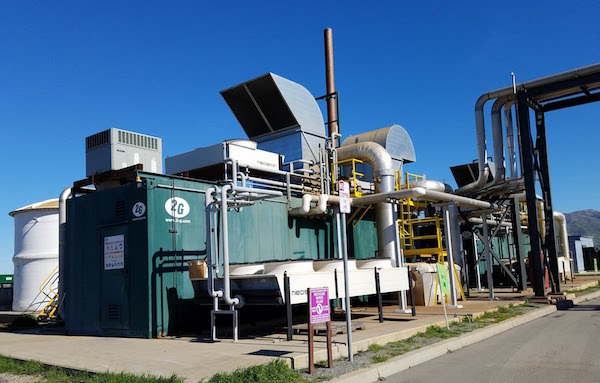 After 21 days, what’s left in the chamber is referred to as “digestate”. What then?

I once heard a dairy farmer comment that he considered himself a manure manager who happened to generate some milk on the side. Similarly, I expect composters would consider themselves to be odor managers much of the time. When ZWEDC first opened, the digestate was composted on site. However, the odor proved difficult to control, so today the material is trucked to a facility in Gilroy for further processing. (3) The final steps at ZWEDC are all about deodorizing.

The digestate is moved into one of four composting chambers at the end of the aisle, where it is aerated and dried out. The composting process helps to release ammonia and other aromatic compounds. Air from those chambers and from the building, pushed out by large fans, is forced through natural biofilters (huge tanks of wood chips) just outside the building. You can see the four large filters on the lower right of the ZWEDC facility below, just outside the section of the building where the composting chambers are housed. (Above the facility you can see the pipes leading to the cogeneration facility on the other side of the road. The pipes connect to two large bladders on the roof that capture the methane from the digesting chambers.) 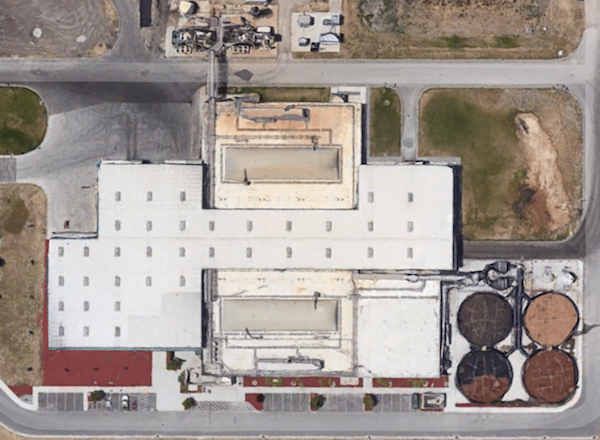 After a few days in the composting chambers, trucks take the digestate from San Jose to Z-Best Composting in Gilroy, where it will be turned into compost. (Recology uses a Gilroy composter called South Valley Organics.)

As you can see in this satellite photo, Z-Best is surrounded by large rows of composting material: 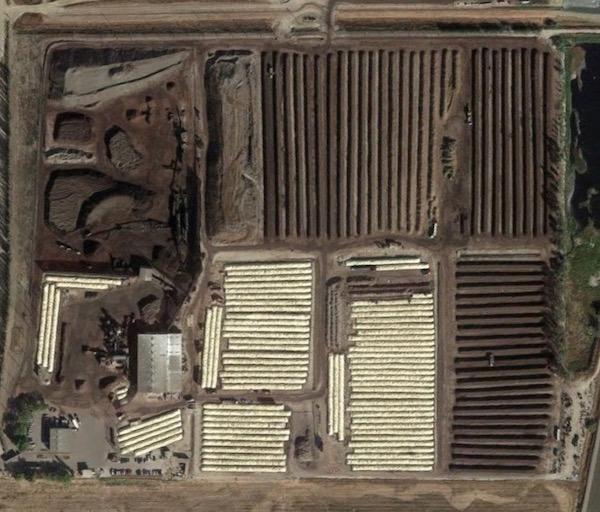 When the digestate arrives from ZWEDC, it is shredded and put into 350-foot long white bags, which are aerated with pipes. (4) After composting for 14 weeks, it is removed, turned, and screened to remove contaminants and large pieces. After another 4 weeks of turning and aerating, it is screened again, producing the landscape compost shown here. 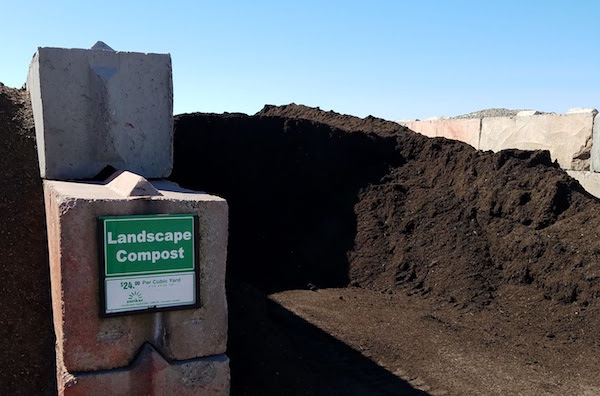 Z-Best also produces a CCOF-certified organic compost, which is made from a mix with no contaminants, generally from a separate San Jose yard waste collection. Several materials in our green bins disqualify it from being used in an organic compost. Colored paper is one such example. Another is the PLA (compostable plastic), which is not considered to be organic. And there are a few other contaminants. Z-Best is happy to be able to provide its customers with several choices of compost with different levels of nutrients. (5)

Interestingly, while PLA items are allowed in Palo Alto’s compost, they are not allowed in Mountain View’s, since the process that Mountain View uses is not able to decompose it in time. It is generally true that “compostable” items do not always degrade quickly enough, which is why Z-Best employs several screens in its production process. And although dog waste is technically compostable, it is not allowed due to odor and flies. Please continue to put that in the trash!

Many thanks to Michael Gross, the Director of Sustainability at Zanker, for showing me around the ZWEDC facility. 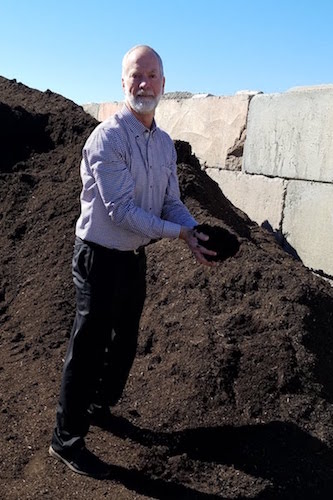 1. Organic waste from Palo Alto goes to ZWEDC first for digesting, and then to Z-Best for composting, as this post describes. The organic waste from Portola Valley and Woodside goes to the GreenWaste facility in San Jose for sorting, and then to Z-Best, skipping the digesting phase. All three cities have contracts with GreenWaste, but involve different services and rates.

2. ZWEDC uses a so-called dry digesting process. It requires very little pre-processing, and is simpler than a wet digesting process, which involves more machinery, energy, and maintenance, with higher operational costs. ZWEDC provides an overview of its technology here: https://www.zankerrecycling.com/zwedc/facility/technology

3. This article, written shortly after ZWEDC opened, shows a photo of the integrated facility (digesting plus composting), and has some interesting information about the construction of the facility as well as the permitting process: https://www.biocycle.net/2014/03/28/high-solids-anaerobic-digestion-composting-in-san-jose

4. Z-Best is planning to move to a process that eliminates the long plastic bags with the fixed aeration pipes inside them. Instead, it will be moving to an “aerated static pile” system, in which air is drawn through the piles and run through a biofilter to remove odors. The technology they will be using, made by Engineered Compost Systems, is described here.

5. An important part of being an effective composting and recycling operation is ensuring you have thriving markets for your products, that you are creating products that people and businesses want. You can see some of Zanker’s offerings here, not just from its composting operation but also from its construction and debris recycling: https://www.zankerlandscapematerials.com. For example, the mulches are made by shredding wood, much of it from construction debris, to different sizes, and then dying it.

6. The EPA has a high-level overview of composting techniques here: https://www.epa.gov/sustainable-management-food/types-composting-and-understanding-process

I grew up in Saratoga, now run a clean water (wastewater treatment) facility in Lewiston, Maine. WE anaerobically digest our biosolids and some food waste. We also had a great compost facility that we recently had to shut down (combo of DEP and supplier issues). Anyway, it is great to hear that my old stomping ground is doing good things with the wastes society things very little about. I am curious how "clean" the final product is -- my experience is that plastics once in a waste stream are extremely difficult to fully remove.


@Clayton -- Yes, we are lucky to have great people working on these things! And great question about contaminants.

Live from Palm Springs by the pool...

Great question, though plastics is only one of the problem materials. Glass is our major issue. Z-Best has invested in a special screening system called a densimetric table that removes both plastic and glass smaller than 1/8” minus. In 2017, CalRecycle imposed new regulations that require all compost to meet a contamination rate of less than .05%. The Z-Best Organic Compost and the Z-Best Landscape Compost meet this requirement.


Incidentally, a reader asked me offline about the 1.3MW generated by this digester, and whether that was steady state. While the digester has two 800kW CHPs (combined heat and power units), so sufficient capacity for the 1.3, it takes very full loads to keep it there, and they are not always getting the (clean, uncontaminated) loads they need to achieve that, particularly from San Jose. Please don't be shy about putting your (uncontaminated) yard waste in the green bin!

How we eat away at our open space, even in Palo Alto
By Sherry Listgarten | 5 comments | 6,575 views

From cioppino and whole crab to crab pot pie, here’s where you can get your Dungeness crab fix in the 650
By The Peninsula Foodist | 6 comments | 4,769 views

Is telling the truth simply an old-fashioned idea?
By Diana Diamond | 28 comments | 3,759 views