Saucebelly barbecue to pop up in Redwood City

Regal met Wilson in his native Charleston, South Carolina. They have both worked in local restaurants for more than 20 years, both front and back and house, include at the now-closed Calafia Cafe in Palo Alto and Waterdog Tavern in Belmont. Regal also worked as pitmaster at Armadillo Willy’s in Los Altos and Wilson is currently a part-time manager at Timber & Salt.

The couple traveled to the East Coast this summer and "took the barbecue trail back," Regal said. When they were back home, they wanted to recreate what they tasted throughout the South and decided to launch Saucebelly.

Regal describes their barbecue style as a hybrid of Texas and the Carolinas. They have a custom hardwood smoker and churn out brisket, pork shoulder, pork spare ribs, half chickens, lamb shanks, hot links and other proteins. 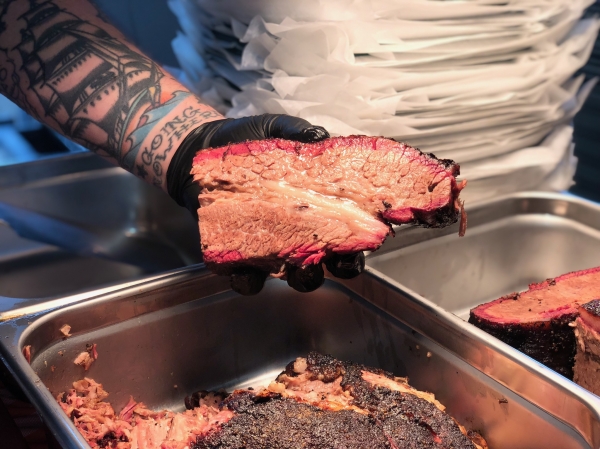 "What I offer in the way of particularly brisket and ribs would be definitely considered Texas, without a doubt, but being from the Carolinas our pulled pork is something we take very, very serious," Regal said. "There are subtle nuances of that throughout."

Sauces are also a mix of the two regions: there's South Carolina-style mustard, a tomato-based central Texas sauce with sugar and molasses and a raspberry-chipotle sauce. They're also collaborating with Federation Brewing in Oakland to develop a beer-based sauce.

The couple, who lives in Woodside, hope to eventually open a brick-and-mortar barbecue restaurant in Redwood City. They see it as an "up-and-coming community" with the right demographics for their food.

"What you have is a group of people (who) aren’t settling for bad food," Regal said. "They're not going to the corporate restaurants. They're going to the smaller spots and they appreciate it."

The Saucebelly pop-up will be at Timber & Salt, 881 Middlefield Road, from 11 a.m. to 2 p.m. Follow Saucebelly’s blog for information about future pop-up events.

This is an excellent event; thank you, Elena, for mentioning it. It's great to see an existing vendor, Timber and Salt, partner with a unique, specialty "pop-up" to create an entirely different combination. All the more reason for local patrons to enjoy a different downtown-culinary experience. Hopefully, we will see more relationships like this, adding value to the dining experience. Timber and Salt will definitely acquire new clients who will come back again, as 2019 progresses .....


YES! I went to the last one, and I can tell you as a foodie: Best brisket west of Austin.


The investor of Coffeebar is not named. Coffeebar opened in 2017 in Squaw and quickly followed, opened in Menlo Park, CA and now Redwood City, CA., two very expensive areas to open a business. It's not just a guy, Greg opening CoffeeBar with his wife. Takes a LOT of capital for this expansion... Is Any Wirth, Ex CEO of Squaw, Tahoe funding coffeebar? Why isn't this information part of the glitzy narrative about CoffeBar. Are customers not entitled to know who really is behind Coffeebar? Greg has up until a couple of years ago only had two Coffeebar locations, humble living, and now within 1.5 - 2 years, has Squaw, Menlo Park and Redwood City.

Report Objectionable Content
Posted by Reading Comprehension, a resident of another community,
on Dec 20, 2018 at 3:35 pm

Please stick to discussion about the article topic.

Report Objectionable Content
Posted by Gale Johnson, a resident of Adobe-Meadow,
on Dec 21, 2018 at 1:40 pm
Gale Johnson is a registered user.


I'm a recent newbie on the smoking stage but I've had really good success and received raving reviews for my endeavors, so far, from friends and neighbors. I share the results with them and also with the meat cutters...aka butchers...at Piazzas. That's where I buy my meat. I've done salmon, baby back pork ribs, turkey drumsticks, and beef brisket. I will definitely try out this new culinary establishment. Sounds much better than waiting in long lines at Shake Shack. And oh my, look at that beautiful smoke ring on that brisket in the pic. The pride of a pit-master.

From cioppino and whole crab to crab pot pie, here’s where you can get your Dungeness crab fix in the 650
By The Peninsula Foodist | 6 comments | 4,762 views

Is telling the truth simply an old-fashioned idea?
By Diana Diamond | 28 comments | 3,756 views