Uploaded: Oct 25, 2018
In the last six months, four restaurants in Mountain View and five in Palo Alto were shut down by the Santa Clara County Department of Environmental Health due to vermin contamination.

The county posts restaurant closures on an online database that goes back six months.

The Mountain View restaurants include Doppio Zero, Bangkok Spoon and Chef Zhao Bistro. All reopened in one or two days, according to inspection records, though Bangkok Spoon is currently closed.

The now-shuttered Shiva's Indian Restaurant at 800 California St. was shut down for a day this June and its health permit suspended after an inspector found live and dead cockroaches in the kitchen and storage areas. (The space is now under new ownership and has since passed a health inspection.) 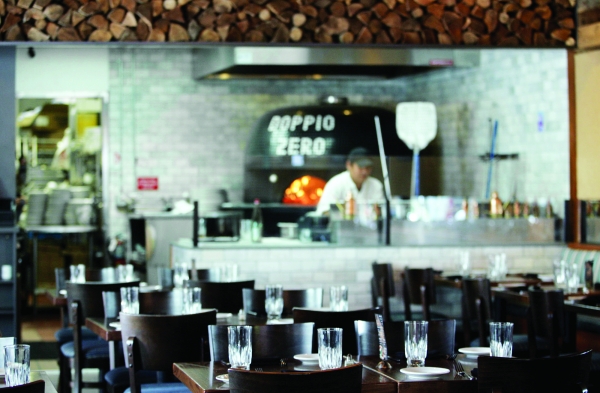 Doppio Zero in Mountain View was among local restaurants the county shut down in the last six months due to health violations. Palo Alto Weekly file photo.

The Palo Alto restaurants are Thaiphoon, Coconuts Caribbean Restaurant, Rangoon Ruby, Ruby Sushi and Umami Burger. All except Umami Burger, which was closed for nine days in May, reopened within one to two days. Umami Burger passed a routine inspection earlier this month.

Vermin — cockroaches, rodents and the like — are among the most common restaurant violations in Santa Clara County, said Rochelle Gagdi, director of the Department of Environmental Health's Consumer Protection Division.

Of the 278 restaurant closures in the last year, almost 200 were due to vermin, Gagdi said. Anything that would cause an "imminent health hazard" to the public prompts a required closure, she said. That is primarily vermin, followed by failure to supply hot and cold running water and failure to properly dispose of sewage.

When the county shuts down a restaurant, policy requires the inspectors to revisit within three days, but they will return more quickly if the owner requests a follow-up inspection, Gagdi said.

All inspections are conducted without notifying the restaurant. Inspectors — trained environmental health specialists — examine all "employee areas," including the kitchen, bathrooms and storage, food-prep, washing and outdoor trash areas, Gagdi said. The county aims to visit each restaurant at least once a year but will have a more frequent presence if there are ongoing health violations, she added.

The county posts restaurant inspection results on its website and a mobile app, SCCDineOut.


Can you really get rid of vermin contamination in a few days? That requires a service to come in and exterminate!
I would not want to return to any of those restaurants any time soon!


The city of Mountain View has a major rodent problem. Exterminators are turning down business because they have too much. What is the city doing to address this problem? The effort can't be the sole responsibility of local businesses.

State Street Market plans overhaul of its eateries as it cuts ties with Bon Appétit, triggering layoffs
By The Peninsula Foodist | 11 comments | 3,935 views

Doing more with the natural spaces we have
By Sherry Listgarten | 6 comments | 2,494 views