Uploaded: Aug 22, 2018
John Madriaga has worked at Michelin-starred restaurants far and wide, from The Village Pub in Woodside and Manresa in Los Gatos to Noma in Copenhagen. Now, he's striking out on his own to pursue a project closer to his own roots: a Filipino restaurant.

Madriaga, who was raised in Santa Clara by Filipino parents, plans to open what will be an admittedly non-traditional Filipino restaurant at 201 3rd Ave. in San Mateo in early 2019.

He left The Village Pub in July, where he was chef de cuisine. He said he's been discussing this particular project for years with Bacchus Management Group, which operates The Village Pub and Spruce, but it never panned out. 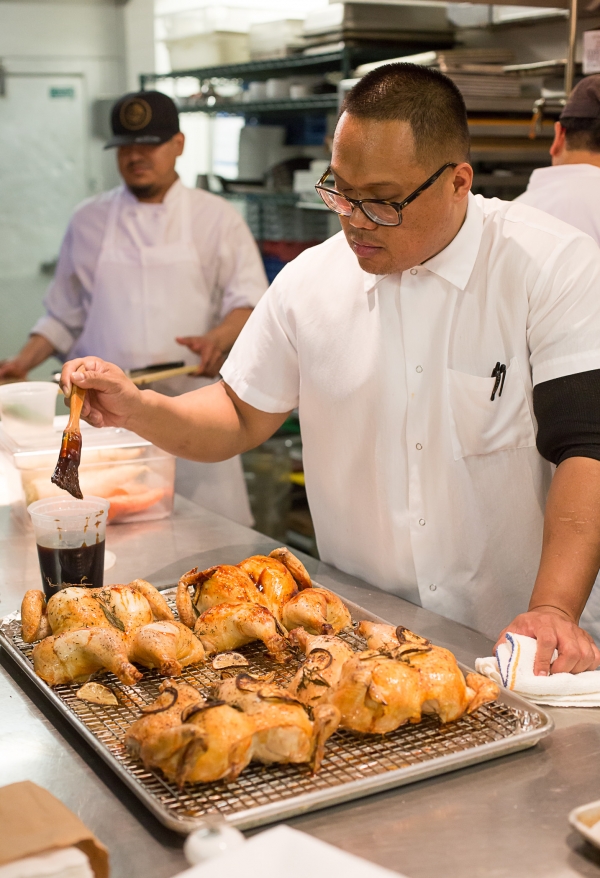 A regular at The Village Pub recently approached former restaurant manager Miko Lorenzo about opening a modernized Filipino restaurant; Lorenzo then brought Madriaga into the project.

The restaurant doesn't yet have a name. It will serve what Madriaga described as "new Filipino cuisine" that will honor traditional flavors while incorporating his training and experience.

"What is it I'm going to really be passionate about cooking for the rest of my life? I thought it would be a cool idea to take everything I've learned from Michelin star (restaurants) … (and) put all that thought and technique into a new Filipino cuisine in the Bay Area," he said.

There will be plenty of grilled dishes, such as lechon manok: a whole, spatchcocked chicken marinated in lemongrass, garlic, ginger and pandan leaves; roasted over flames and served with Filipino crepes and different types of relishes.

"It's a meld of Mexican, Chinese, Spanish, a little bit of Indian influence, the indigenous cuisine -- it's all these things in one," Madriaga said. "It’s salty; it's sweet; it's sour. There's definitely umami because of a lot of the fermented fish products that we incorporate into the food."

The restaurant will be open for dinner initially but eventually add lunch.

Madriaga wants to bring Filipino food into the mainstream in the Bay Area, as is happening right now doing in other cities across the country. Just this week, Berkleyside published a story with the headline "A Filipino food movement is sweeping the East Bay." (Perhaps Travel Channel host Andrew Zimmern's much-reported 2012 prediction that Filipino cuisine would be "the next big thing" in the food world -- echoed by the late Anthony Bourdain last year -- is coming to fruition.)

About 13 percent of the country's entire Filipino-American population lives in the Bay Area, with heavy concentrations in Daly City and South San Francisco, according to the Pew Research Center.

Madriaga graduated from the California Culinary Academy in San Francisco. He worked in Chicago before becoming a line cook at The Village Pub. In 2008, he left to work at Manresa. Madriaga also spent time in Europe, working as a stage (an unpaid intern) at Noma before returning to work at Spruce.

His mother -- from whom Madriaga said he inherited his passion for cooking -- will be an important sounding board.

"I'll definitely be leaning on her regarding authenticity on the dishes," Madriaga said.

Adobo is one of the most popular Filipino dishes and is considered unofficially by many as the national dish. It usually consists of pork or chicken, sometimes both, stewed or braised in a sauce usually made from vinegar, cooking oil, garlic, bay leaf, peppercorns, and soy sauce.


Are there any good Filipino restaurants in Palo Alto, Menlo Park, Los Altos, or Mountain View? We've been underwhelmed by various inexpensive counter-service and buffet Filipino places. Thanks.

This barbecue business was kicked out of Belmont. Now it's a Sunday fixture in Redwood City.
By The Peninsula Foodist | 2 comments | 4,583 views

Doing more with the natural spaces we have
By Sherry Listgarten | 8 comments | 3,239 views