Uploaded: Aug 15, 2018
A team broke ground this week on the Ameswell Mountain View, a $250 million mixed-use development with a luxury hotel and restaurant at 750 Moffett Blvd.

The restaurant, which will serve the hotel as well as the public, will be a casual, "modern gastropub," said James Bosco, an investment associate with firm Broadreach Capital Partners, which is building the hotel with partner Rockwood Capital. 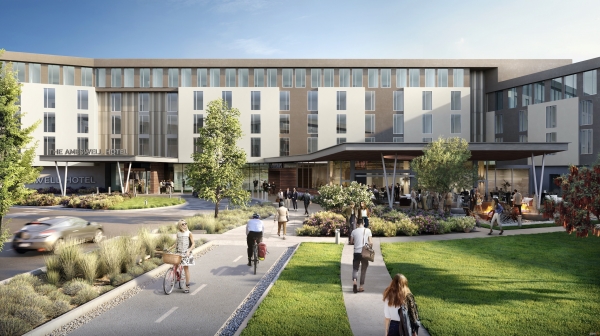 The same team behind the luxury Rosewood Sand Hill hotel in Menlo Park and its Michelin-starred restaurant Madera is designing the Ameswell. The Ameswell restaurant will be more casual than Madera (no Michelin ambitions, Bosco said).

"Madera is a place where you go to for celebratory events or one-off dinners. We want the Ameswell Hotel restaurant to be a place where local residents and local office workers will come multiple times a week," he said. "We want it to be a neighborhood place where people come back again and again." 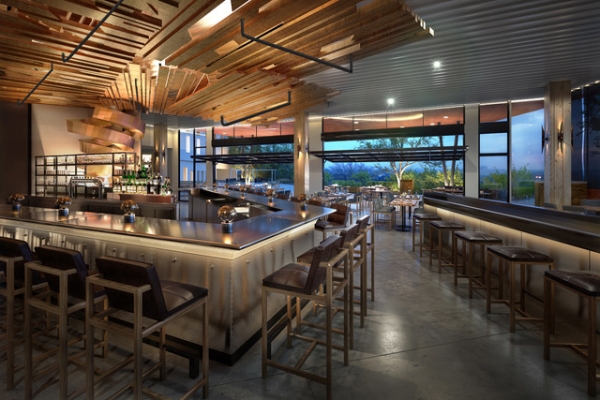 A rendering of the Ameswell Hotel restaurant, to open in Mountain View in 2020. Image courtesy Broadreach Capital Partners.

The restaurant, which has yet to be named, will serve "healthy, locally sourced fare at accessible prices," Bosco said. The restaurant will have an indoor/outdoor feel, with two 16 by 10-foot tilt-up doors that can open onto a 2.5-acre outdoor space in front of the hotel. Outside, there will be seating, fire pits, a bocce ball court and an airstream trailer that serves cocktails, beer and wine.


Nice rendering, but it doesn't show the either of the 2 freeways, or high power electric lines/substation that border it. Ironically, you can just make out that it has a 'Mountain View', unlike most of its concerned and slowly boxed in neighbors.


i hope the patrons at the bar are louder than the traffic on 85/101 interchange. And as Frankly mentioned, the substation that's right there...Hmmm...well, i'll give it a shot (pun intended!) and go visit, once it's up. i would, however, like a good local joint with that ambiance that won't charge $15.00 for a martini, like the four seasons on 101/university did...

Report Objectionable Content
+   8 people like this
Posted by Price it right, a resident of Another Mountain View Neighborhood,
on Aug 17, 2018 at 11:21 am


"We want it to be a neighborhood place where people come back again and again."

Assuming the food is good, they will come back IF the menu is priced to allow that. If it costs a couple $60 bucks each time they go out for burgers and fries, I doub't they'll get a lot of frequent returners.

Price the menu properly to reflect your desire for neighbors to come often.

Couples: Are you Committed to your Vows or Dysfunction?
By Chandrama Anderson | 1 comment | 2,054 views

Do peaceful protests do any good? How about the more violent ones?
By Diana Diamond | 8 comments | 917 views