Uploaded: Jul 10, 2018
Two Gunn High School graduates have created what they believe is the next big thing in the food-technology space: a high-tech oven that uses infrared light -- plus a healthy Silicon Valley dose of sensors, artificial intelligence, Bluetooth capacity and proprietary algorithms -- to cook everything from steak to pizza in a fraction of the time it would take in a conventional oven.

Dan Yue and Thomas Cheng are the co-founders of Brava, a well-funded Redwood City startup that until this week has stayed largely mum about the details about its product. On Tuesday, the team debuted the $1,000 Brava oven to the public at the opening of its flagship showroom at Stanford Shopping Center in Palo Alto. 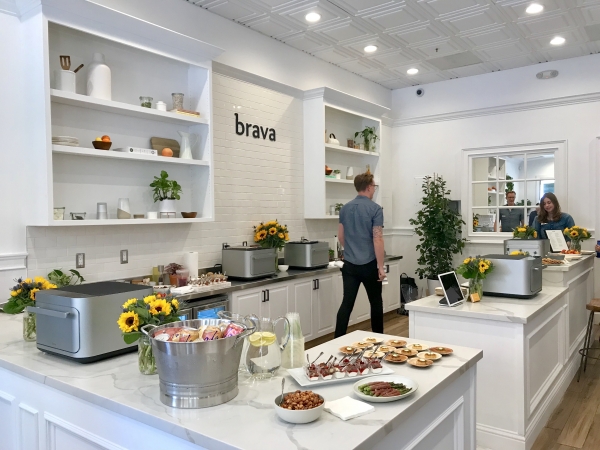 The oven's technology allows home cooks to make customized, high-quality meals in a short amount of time. A whole, 4-pound chicken is done in the Brava oven in one hour. Steak and potatoes, 15 minutes. At the showroom on Tuesday, a thick cut of skin-on Alaskan salmon came out medium-done and with crispy skin in about 15 minutes, cooked next to asparagus spears and cherry tomatoes.

Inside the 34-pound, 11-inch tall countertop oven are six infrared lamps that project visible and non-visible light onto food. The oven has three "zones," allowing proteins, vegetables and starches with different cooking temperatures to cook simultaneously, without any over- or under-cooking. No pre-heating is necessary; the company says the oven can go from 0 degrees Fahrenheit to 500 degrees Fahrenheit instantly. 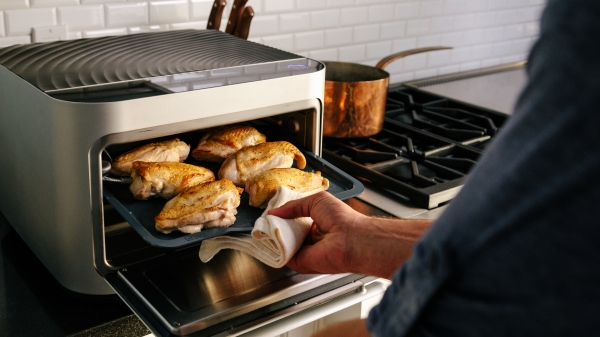 A proprietary thermometer with five detection points allows for precise cooking, with readings up to one tenth of a degree. The oven's technology can adjust the frequency of lightwaves "in real time to cook the interior and exterior of foods independently, allowing intense sears on the outside while preserving inner doneness and delicate flavors," the Brava website states.

"It's kind of like having a pan and an oven in this infrared cooker all in one," Cheng said.

Using a small LCD touchscreen on the top of the oven, the home cook can choose to sear, bake, reheat, toast or keep items warm. There are options to customize doneness level for proteins, from rare to well-done, with settings for different cuts of meat and fish. Even toast can be customized, with options for light, medium or dark for different kinds of bread.

A heat-resistant camera positioned inside the oven allows users to watch their meals come to fruition without opening the oven door. The oven is synced to a smartphone app that will send a notification when a meal is done.

The oven is also energy efficient. It can cook a full meal for two with less energy than it takes to pre-heat a traditional oven, Cheng said.

The Brava oven comes loaded with recipes developed by a team of chefs, led by a former Restaurant Gary Danko cook with both culinary and business degrees. The company also operates as a meal-kit service, delivering pre-portioned ingredients to customers for the pre-set meals, such as spatchcocked chicken with Brussels sprouts and butternut squash or a New York steak with mushrooms, onions and arugula salad.

For those who want to create their own dishes, there’s the more flexible "chef mode."

The seed for Brava was planted six years ago, when Yue noticed his mother constantly going back and forth to the kitchen during a holiday gathering. This memory stuck with him years later, when he ran into Cheng, who had experience in hardware, firmware, manufacturing and heat technology. Yue is also the founder of Green Chef, a meal kit delivery company.

Together, they developed the Brava technology in Cheng's garage. They found a willing partner in John Pleasants, the former co-president of Disney Interactive Media Group, CEO of Ticketmaster and Samsung media executive, who helped bring in investors. The company has raised $25 million to date.

Travis Rea, Brava’s head of culinary development and operation, was admittedly skeptical when he first heard about the "smart" oven. He's been cooking professionally for 20 years, including his three years at Gary Danko and a decade in food development at Williams Sonoma. He said he initially dismissed Brava’s technology as implausible "Silicon Valley hype" — until he saw a demo himself.

He's now convinced of the oven's potential to revolutionize home cooking for all kinds of people, from busy parents to professional chefs. It’s not a replacement for one's oven, grill or microwave, but rather a complementary appliance, Rea said.

The oven, which starts at $995, isn’t available just yet. It’s available for pre-order now and expected to ship in November.


It sounds interesting, I'm curious to see it and the results.

A few comments on details:

(1) All ovens cook via infrared radiation, what's different in the description above is that instead of flames and hot metal, or simple electric heat elements, the heat sources are precise lamps that can be switched selectively. (2) Use of multiple, different-wavelength lamps for cooking isn't new, it's even been in inexpensive toaster ovens for years (I have one such from Panasonic, which tries, unfortunately, a little too hard to detach the cook from time/temperature considerations by second-guessing what program of heat each food type needs; I hope the "AI" and algorithms in Brava's are smarter than just imposing such we-know-best rules). (3) Very fast-cooking, mixed-heating-technology, internet-enabled "smart" ovens have also been available for commercial foodservice use at least 15 years, debuted at professional food shows, albeit at many thousands of dollars and not aimed at home users. This looks like an adaptation of that basic idea to a wider market. (4) Temperature "readings" with one-tenth degree resolution don't mean oven temperatures controlled or even measured to that much absolute accuracy. (Consumer marketing occasionally exploits such confusions.) (5) Very small point re "Brussel sprouts:" Belgium's capital, which the little cabbages are named for, is spelled Brussels.

Report Objectionable Content
Posted by Bill Bucy, a resident of Barron Park,
on Jul 11, 2018 at 8:45 am
Bill Bucy is a registered user.


The cooking times compared to salmon and steak on the grill or a spatchcocked roasted chicken don't seem that impressive. However, being able to properly cook all the food for a meal in the same oven and have it come out at the same time seems pretty nifty.

Report Objectionable Content
Posted by JLN, a resident of Charleston Meadows,
on Jul 11, 2018 at 2:16 pm
JLN is a registered user.


For those who don't need a large oven like this, I recommend a Brevelle Mini Smart Toaster Oven, currently about $150. from Amazon. Since getting ours about a year ago, it's reduced our need to use our standard oven (baking, roasting, broiling) by about 90 percent. Preheats in less than 5 minutes (vs 15-20 min in our regular electric oven), and cooking time is much less for the same foods. Now, we use our regular oven only for large items.

How we eat away at our open space, even in Palo Alto
By Sherry Listgarten | 5 comments | 6,481 views

From cioppino and whole crab to crab pot pie, here’s where you can get your Dungeness crab fix in the 650
By The Peninsula Foodist | 6 comments | 4,701 views