The 508 University Ave. cafe opened on Saturday, June 30, in a large space on the ground floor of a brand-new building at the corner of Cowper Street and University Avenue. It's the first of three outposts the Danish chain has announced for Palo Alto. 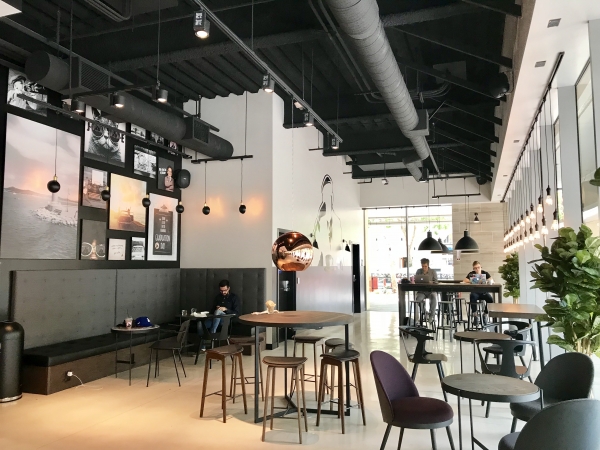 The interior of the new Joe & The Juice in Palo Alto. Photo by Elena Kadvany.

On the menu are fruit and vegetable juices, which start at $7 (for a small, 12 ounces) and go up to $10 (for the large, 10-ounce "signature" juices). Juices include the "Prince of Green" with lemon, pineapple and cucumber; the "Pick Me Up" with raspberry, banana and apple; and the "Green Shield" with spinach, kale, broccoli, cucumber and apple. 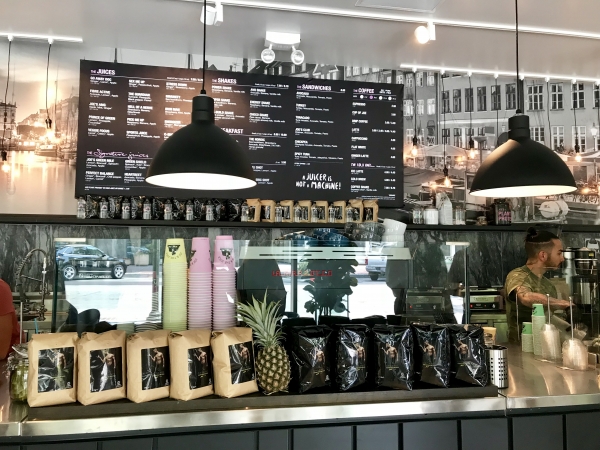 Customers order and pick up juices, smoothies and other fare at the counter, adorned with the cafe's coffee bags. Photo by Elena Kadvany.

The modern space has ample seating and conveniently placed electrical outlets to enable using laptops there, which several people already were on Monday afternoon.

The company is opening two more locations, one just blocks away on 240 Hamilton Ave. and another at Stanford Shopping Center.

julie armitano is a registered user.

Report Objectionable Content
Posted by Anna, a resident of Stanford,
on Jul 8, 2018 at 6:46 pm


It is great! The juices are fresh and the sandwiches are healthy and tasty - I had a tunacado sandwhich with a mix of tuna salad and avocado. Finally, it is the best cappocinno in palo alto... comparable to Italian standards ;-) Perfect place to relax and catch a casual lunch or coffee...

Report Objectionable Content
Posted by Steve, a resident of another community,
on Jul 9, 2018 at 12:25 pm


Very comfortable and relaxing environment. Happy and energetic employees serve healthy juice drinks and sandwiches. They are happy to customize anything. Been twice and plan to make it a regular stop. Hope the city allows outdoor seating soon.

Three new restaurants from former Manresa chef David Kinch and his team are coming to Los Gatos
By The Peninsula Foodist | 4 comments | 4,940 views

Doing more with the natural spaces we have
By Sherry Listgarten | 3 comments | 1,760 views