Uploaded: Jun 18, 2018
Udon noodles made on a machine imported from Japan will be the focus at Taro San Japanese Noodle Bar, which is opening at Stanford Shopping Center in Palo Alto this fall.

The noodle shop is a longtime dream of Jerome Ito, a former sushi chef behind Go Fish Poke Bar, a string of local fast-casual poke restaurants. He opened a location at Stanford Shopping Center in 2016 and in downtown Redwood City the following year.

Feeling like the Bay Area has become saturated by ramen shops, he decided to focus his newest project on udon and some soba noodles.

"They really haven’t gotten the recognition that I feel like they deserve," Ito said in an interview. 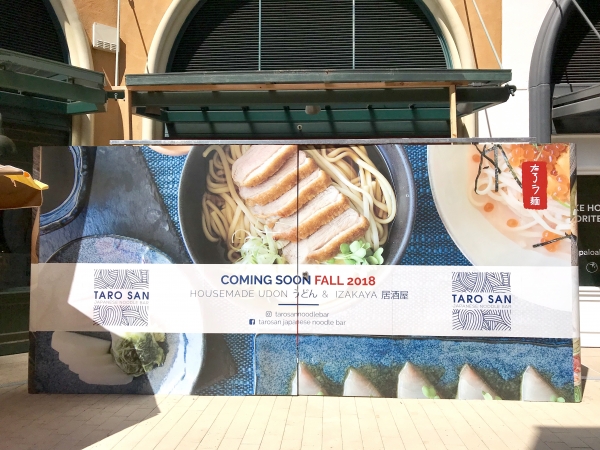 Ito has been traveling to Japan and Singapore to train on the special noodle-making machine. He came up with a slightly different udon noodle that's more "delicate, thinner (and) flatter" than is typical. The machine will make his custom version and a traditional one. He's also looking to make a gluten-free noodle.

The noodles will be made fresh and on view from the dining room of the restaurant, located between Cocola Bakery and a soon-to-open smart kitchen appliances store called Brava, across from Sigona's Farmers Market. The noodles will also be available for sale.

Ito is planning to put his own spin on the broth and incorporate ingredients such as uni, duck and short rib. There will also be small izakaya dishes and some sashimi.

Everything will be served on hand-spun plateware made by a Japanese couple in Milpitas.

Service-wise, Taro San Japanese Noodle Bar will far somewhere between a fast-casual and sit-down restaurant. Customers will order and pay on iPads at the tables, but there will be wait service.

There will be an open kitchen with sushi-bar style seating where diners can watch the staff at work. Ito envisions an environment that channels "very much a street, cool vibe of Tokyo."

Ito attended culinary school in his native Los Angeles and worked with well-regarded L.A. sushi chef Andy Matsuda before moving to the Bay Area. Ito was head sushi chef at Bushido Izakaya in downtown Mountain View for just under a year and then left to open Google's first dedicated sushi bar.

He then started a catering company and opened the first Go Fish Poke Bar in San Jose in 2015.

Ito is hoping to open Taro San around September, "right in time for the cooler seasons for noodles."

We really like the fresh udon shops in San Francisco like Mugizo and Marugame. Udon is fast food in Japan, quick and inexpensive, but much tastier and much less fatty than American fast food. Looking forward to trying something in Palo Alto, especially if it is not Americanized too much.

This barbecue business was kicked out of Belmont. Now it's a Sunday fixture in Redwood City.
By The Peninsula Foodist | 5 comments | 5,389 views