Ramen Nagi, a successful Tokyo-born ramen chain, is opening its first-ever U.S. location at 541 Bryant St. The restaurant is the brainchild of chef Satoshi Ikuta, who has been making ramen for more than half of his life, he said in Japanese through a translator at a media preview on Thursday, June 14.

Since he first visited the United States 15 years ago, Ikuta "wanted to bring my ramen to America." He said he was attracted to the Bay Area as a "culinary capital" with access to quality ingredients and a great climate.

Each bowl starts with the tonkotsu as its base. The pork broth is cooked for more than 20 hours.

Diners can then customize every aspect of the ramen, from strength of flavor and the amount of oil and garlic to the firmness of the noodles. Toppings include cabbage, seaweed, green onions, tree mushrooms, pork loin, pork belly and an egg that has been marinated for a full day. 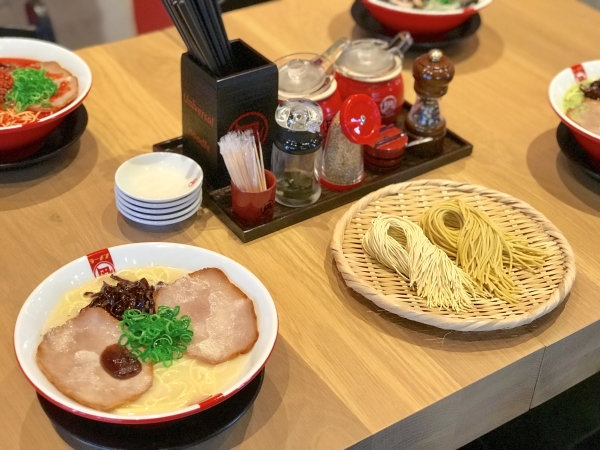 A bowl of tonkotsu ramen and two types of noodles, thick and thin, available at Ramen Nagi. Photo by Elena Kadvany.

"Limited king" ramens are featured weekly with special ingredients such as lobster, brisket and shrimp. Ikuta is creating a limited ramen special to the Palo Alto location. There are also unannounced special ramens, staff said Thursday.

Never seen before at a Ramen Nagi is a vegetarian ramen — the broth made from cauliflower, onions, milk and garlic — that will be a rotating menu item in Palo Alto.

Ikuto is "not confined by a certain orthodoxy," said Stanley Ko of The Ko Hospitality group, which is behind Ramen Nagi with the chef.

Every table inside the 60-seat restaurant comes with various add-ons: jars of bean sprouts, spicy Japanese sauerkraut, housemade seaweed vinegar, fish powder and white sesame seeds in a manual grinder. There are no napkins but instead boxes of tissues, as is standard in Tokyo, staff said. 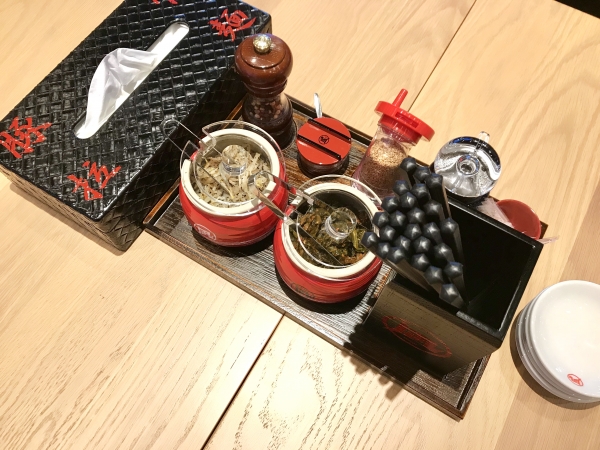 Ramen toppings and tissues at each table. Photo by Elena Kadvany.

According to Ikuto, there are three steps to eating the ramen. First, taste the broth. Second, spread around a dollop of spicy "Nagi fire sauce." Third, enjoy with the noodles.

There are also numerous side dishes new to the Palo Alto location, including chicken karaage, two kinds of gyoza and katsu (pork belly rolled with Monterey Jack cheese, then breaded and deep-fried). The sides will range in price from $4 to $7.

Consistency, craft and hospitality are king at Ramen Nagi. The staff was full of information about each dish and the intricacies of quality ramen. (Optimal ramen temperature is between 80 and 85 degrees Celsius, they said. The restaurant has special bowls designed to retain heat -- though they recommend finishing your bowl within 10 minutes.)

Ramen Nagi will be open for lunch and dinner. Staff said the restaurant will stay open later on weekends if there’s a demand for it.

Ramen Nagi is also opening a second location at the Westfield Valley Fair shopping center in San Jose this fall. Ko said they plan to have locations on both the West and East Coast, joining more than 35 locations throughout Asia.

We can't wait! Ramen has been sorely missing in the Downtown area for a long time!

Report Objectionable Content
Posted by julie armitano, a resident of University South,
on Jun 19, 2018 at 9:43 am
julie armitano is a registered user.

State Street Market plans overhaul of its eateries as it cuts ties with Bon Appétit, triggering layoffs
By The Peninsula Foodist | 11 comments | 3,804 views

Doing more with the natural spaces we have
By Sherry Listgarten | 6 comments | 2,313 views