Uploaded: May 2, 2018
More details are out on the restaurant taking over the former LB Steak space in downtown Menlo Park.

Come this summer, 898 Santa Cruz Ave. will be home to Camper, a project from San Francisco chef Greg Kuzia-Carmel.

Kuzia-Carmel has worked in the kitchens of Cotogna, Quince and Outerlands in San Francisco and Per Se in New York. He’s partnering with Roland Passot of the South Bay’s Left Bank Brasseries (including one blocks away from Camper) and La Folie in San Francisco to open the new restaurant. 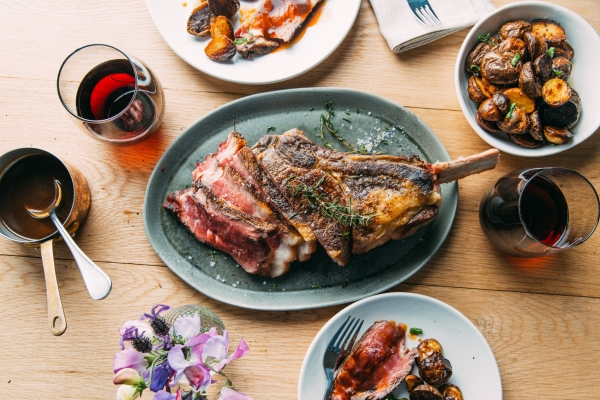 A ribeye for two will be on the menu at the forthcoming Camper in Menlo Park. Photo courtesy Camper.

LB Steak closed in April after six years of business, with the ownership hinting at a "new and exciting" concept to open there.

Camper will serve dinner and weekend brunch, with handmade pastas, roast chicken, ribeye and cocktails. The restaurant will seat 70, with a communal dining area, bar and patio seating and a private dining space.

"Camper originated as a simple idea — bring our collective experiences and travels to this welcoming community by way of deliciously crafted fare and warm hospitality," Kuzia-Carmel said in a press release.

Camper's managing partner is Logan Levant, a former PR executive who went on to open the well-known Buttercake Bakery in Los Angeles. She now lives in Menlo Park and said she recognized the city's "need for a truly Californian neighborhood dining experience."

She envisions Camper to be a restaurant "where you can go for everything from an early dinner with kids, to a celebratory meal, to a memorable private function, all with a high level of service in a relaxed environment."

A revamp of the 4,000 square-foot space will be done by San Francisco architecture and design firm The Martin Group.

Kuzia-Carmel, a native of upstate New York, has worked in restaurants since a young age. He started his professional career in Boston, apprenticed at a two-Michelin-star restaurant in Spain and later returned the United States to work at Per Se, which has three Michelin stars. He moved to San Francisco in 2014 and started working at Quince. 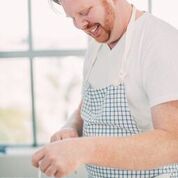 Why the name Camper? Will tents be set up for the customers? Should the diners bring their own sleeping bags? LOL.


@Happy, same question here. Conjures a vision of insect repellent and washing my own dishes, or more favorably, peace and nature. But I'm not in the hospitality business and know nothing about branding.


Everything about this sounds promising... except for the name. ‘Camper?' REALLY??? I've done a fair share of branding in my career and this name doesn't scream ‘destination dining' to me. I too envision tents... canteens... s'mores and paper plates... I guess time will tell to see if it works for the establishment - wishing the owners much success. Of course I'll be checking it out when they open.


Camper sounds more like pet. Yoo-hoo, Camper, come here. Hopefully this starts to untangle Menlo Park into a Hippie Paradise, and Fremont Park becomes a local watering hole for all the nudists who love to shop at Draeger's (We know who you are- wink wink).

Report Objectionable Content
+   3 people like this
Posted by AboutThis, a resident of Embarcadero Oaks/Leland,
on May 3, 2018 at 5:09 pm


There is going to be a new REI located behind the building area to take up all of that useful parking space. The head chef was just planning ahead.


Let's hope it won't be as underwhelming yet overpriced as both LB Steak and the more recent BBC. Time for the Menlo Park and Atherton try-hards get their concept right - just a nice restaurant that serves great food at prices real people want to pay. 94025 does not = $$

Report Objectionable Content
+   27 people like this
Posted by Reader, a resident of Another Mountain View Neighborhood,
on May 4, 2018 at 10:05 am


LOL, and I thought a shoe store was replacing the former LB Steak! :o)


Good. Only ate at LB Steak once and the worst part about that meal was, surprisingly, the steak. The fish and appetizers were great, but the steak was more than blah.

Report Objectionable Content
+   1 person likes this
Posted by Mountain View Res, a resident of Shoreline West,
on May 4, 2018 at 2:22 pm

Report Objectionable Content
+   7 people like this
Posted by Disappointing, a resident of Menlo Park: other,
on May 5, 2018 at 2:06 pm


So basically just another iteration of a steak-house concept, with a similarly boring bland and not so "Nouvelle" American Cuisine, with steep prices but a cheaper feel to it? Good Luck!


We need a #meattax for all the costly harm meat does to our health, to our community and to society.


I cannot wait for this restaurant to open! Sounds super promising and is much needed in Menlo Park! Happy to see new spots open up that are catering to the community and bringing some energy to our sleepy downtown.

Report Objectionable Content
+   2 people like this
Posted by Downtowner, a resident of Menlo Park: Central Menlo Park,
on May 7, 2018 at 5:08 pm


Does a server dissect that slab of beef? I prefer my entree attractively plated & don't want to struggle demonstrating whatever carving skill I may or may not have.

Report Objectionable Content
+   10 people like this
Posted by Mick, a resident of Menlo Park: University Heights,
on May 7, 2018 at 8:08 pm


Well, thank goodness it isn't another rug or overpriced furniture store! Be kind, give this guy a chance. Menlo Park needs some "ooomph".


Sheesh! Piling on the comments about the name, Camper - I bet you won't forget the name or location now!

Report Objectionable Content
+   9 people like this
Posted by Happy Neighbor, a resident of Portola Valley,
on May 8, 2018 at 9:05 am


Geez folks.... they haven't even opened and the skeptics are out in droves! People complain about downtown MP all the time, we should welcome new businesses who are willing to give it a go! It's great to have a new place in town! I think the name is cute! Welcome, Camper!


New to this blog, are you? A bunch of comments confidently extrapolating, projecting, criticizing and dismissing newly announced businesses not yet open (let alone, experienced by any of their detractors!) is customary here. But not mandatory. Like you I welcome a new enterprise, and withhold judgment before having at least have some tiny bit of experience to base it on.

Report Objectionable Content
+   4 people like this
Posted by charles reilly, a resident of another community,
on May 14, 2018 at 5:30 am


"downtown" areas no longer need to be retail hubs. The hodge-podge of hardware stores and dry cleaners has, in large part, faded away. "Downtown" can be a great venue for relaxation, music, special events - and great food experiences for all tastes and pocket-books. I hope Camper does well and that Menlo Park continues to support great lifestyles and fun for the whole community.

Report Objectionable Content
+   1 person likes this
Posted by Hopeful, a resident of another community,
on May 24, 2018 at 1:36 pm


I was walking through downtown today and saw the sign for Camper, and I am very optimistic! One of my favorite restaurants in Southern California (Carlsbad) is called, Campfire. Yes, there is a heavy camping theme on the decor and the cuisine sounds similar to Camper. The highlight was a s'mores dessert you cook over a little fire at your table. Delicious! If Camper is anything like Campfire, I'm in! That place was such a treat for your soul and your stomach!

Stroll the streets of Paris on the Peninsula with Bon Marché
By The Peninsula Foodist | 2 comments | 3,579 views

Democracy and our police departments
By Diana Diamond | 4 comments | 2,926 views