Uploaded: Apr 19, 2018
There are traces of Greece everywhere in Taverna, a new restaurant opening Monday at 800 Emerson St. in downtown Palo Alto.

Framed black-and-white photographs of statues and busts, taken by the owners' friend at the archaeological Acropolis Museum in Greece, hang on the dining room's walls. Dark blue bottles of sparkling water imported from Greece sit on tables, which along with the light blue wooden chairs were also brought to Palo Alto from Greece. Ceramic pots sourced from an artists' co-op in Athens line shelves high on the restaurant's walls. Co-owner Thanasis Pashalidis picked up the restaurant's narrow, bright-blue front door, which he said was made in 1935 (it's since been repainted), at a junkyard in Greece.

Pashalidis and co-owner Hakan Bala are opening Taverna with chef William Roberts. The team has strong local ties. Pashalidis and Bala, both Palo Alto residents, met working at Greek standby Evvia Estiatorio a decade ago. Pashalidis met Roberts at Mayfield Bakery & Cafe in Palo Alto, where Roberts worked as sous chef and Pashalidis as floor manager. They again worked together at Michelin-starred The Village Pub in Woodside, Roberts as executive sous chef and Pashalidis as captain server. Bala served Roberts when Roberts dined at Evvia; Bala would also often come into Mayfield and Village Pub, the three recalled in an interview this week. 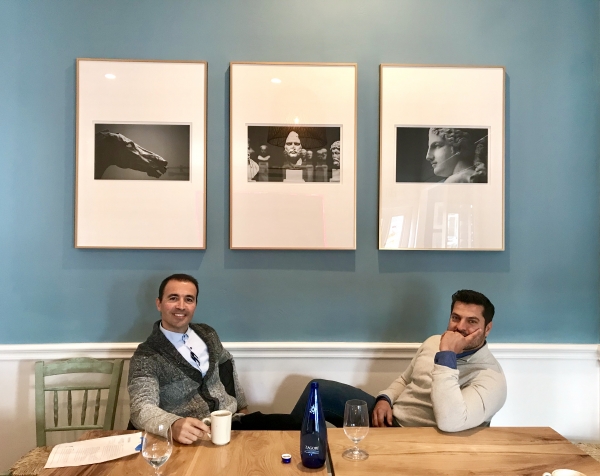 Taverna co-owners and longtime friends Hakan Bala, left, and Thanasis Pashalidis in the dining room of their new restaurant. Photo by Elena Kadvany.

The owners describe Taverna as a "casual fine-dining" restaurant that will provide the level of service and quality of ingredients one would expect at one of their former employers' but in a taverna-like setting. In Greece, the taverna is a "neighborhood gathering place where friends can meet to eat, drink and enjoy life," the restaurant's website explains.

They encourage the sharing of dishes at Taverna, where the menu draws inspiration from different regions of Greece. Roberts visited Greece last year for a week-long research trip, guided by a friend of Pashalidis' and an "insane" itinerary that Pashalidis compiled.

The menu, split into bites, small plates and entrees, is an education in Greek cuisine, though many dishes offer a more modern take. Lamb chops, for example, are treated as a small plate rather than entree, served with spring onions and fried okra.

Roberts elevated an ancient Greek food of the poor, dako — a dried, nutrient-dense biscotti made from whole barley — by topping it with uni from Mendocino and keluga caviar. He softens the dried dako by hydrating it with fresh tomato water.

The bread baskets will come with local sourdough from Acme Bread in Berkeley and koulouri, a ring-shaped sesame bread.

Taverna's sausage is made from a recipe from Pashalidis' sister's butcher in Greece and the "fisherman mezze" appetizer, a seasonal chilled fish, is inspired by Greek fishermen who preserved food while out at sea.

All meat and seafood is sustainably sourced. The lamb comes from Superior Farms in Sacramento and custom ground beef for the Taverna burger from Bassian Farms in San Jose.

A custom-built wine room is stocked with about 150 labels, 40 percent of which are Greek, Pashalidis said.

Taverna is soft opening this weekend and will open to the public on Monday, starting with dinner service Monday through Saturday. The owners plan to add lunch in May.


So excited about this restaurant brought to us by local residents who treasure their culture and heritage in the way Bala and Pashalidis do! This is what I love about living in Palo Alto...the diversity of people and food! I can't wait to try Taverna! Congratulations on working hard to follow your passion!


Emre, I'm not sure why you pointed that out, but the situation is more widespread even than you mentioned. This region has many Italian and "Mediterranean"-menu restaurants, in addition to Greek, that have Turkish-born owners and/or cooks. Near me in downtown Mountain View, even a popular beer garden was co-founded by a Turkish-born owner.

The fact is, many of these people are extremely talented restaurateurs or cooks, and we customers are lucky to have them. Turkey produces many cooks with high skill levels who find successful employment around the world. However in the US, "Turkish" cooking is less widely familiar than some other repertoires, so its practitioners often emphasize other cuisines for practical business reasons.


Thanasi and Hakan are authentic, genuine and fun. They will make you laugh, and provide the best experience at Taverna. The food is on point, with the gorgeous atmosphere.

Report Objectionable Content
+   51 people like this
Posted by Thanasis Pashalidis, a resident of University South,
on Apr 25, 2018 at 10:27 am


Dear all,
Thank you for your support. We look forward to hosting you for many years to come.

I would love to invite you to TAVERNA to show you how Greek I am. I am first generation Greek-American. I am extremely proud of my heritage and I have put all of my pride into TAVERNA.

My partner Hakan Bala, yes, is Turkish. He is an incredibly supportive partner and I am very proud to have him on my team. His ethnicity is an asset to the concept that we have executed. We both share the same TAVERNA roots and are representing exactly what we feel when we visit my village in Greece.

Your comment had been perceived as offensive and I would encourage a more inclusive approach that mirrors the Palo Alto philosophy. Please feel free to stop by TAVERNA at any time to introduce yourself. I'd love to treat you to a friendly glass of wine or a cup of coffee.

Report Objectionable Content
+   17 people like this
Posted by Reader, a resident of Another Mountain View Neighborhood,
on Apr 25, 2018 at 3:19 pm

I just wish to say that Emre's mean-spirited and unneighborly attitude is not representative of all SF Peninsula denizens.

Some of us hope that you and your business will enjoy many years of success and happy patronage.


The brief comment by Emre above is ambiguous, so I don't read a specific intent into it (pending the author clarifying the point). Note, first (although given names are international, so this may or may not be relevant), the only Emres I've met were from Turkey. (One is related to the Turkish-émigré co-owner of the German-themed beer garden I mentioned above, and works there.) And, the comment doesn't have to've been against Turkish restaurateurs. If it was from someone with Turkish roots, I'd read it as a yearning that Turkey's cooking were better known around here (so that its talented practitioners didn't have to offer other cuisines).

Anyway, our local restaurant industry already owes lots to Turkish-immigrant restaurateurs and cooks. Few people realize just how numerous they are around silicon valley. If one day they all moved away, many favorite restaurants would close.

Report Objectionable Content
+   2 people like this
Posted by Bill Wohler, a resident of Menlo Park: Allied Arts/Stanford Park,
on Apr 25, 2018 at 9:21 pm


My favorite Mexican restaurant in Heidelberg was run by an Irishman. I'm looking forward to enjoying some life at the Taverna.


Tell us more about your Turkish restaurant friends...

I look forward to checking out Taverna.

Greece and Turkey share a border, share a 1000 year history. Much of what we know as ancient Greece is now in Turkey, including Istanbul/Constantinople, Izmir/Smyrna, ....

Greek and Turkish food overlap and intermingle in a way that is hard to overstate. A list of common dishes would fill many screens of text, although often the names are different. They're both incredibly delicious.

I've been both places about a dozen times, and many times I've asked what the true origin of a dish is (Turkish or Greek, or perhaps someplace else in the region). E.g. Baklava, or spanikopita/borek, .... You'll get a shrug and a smile.

So yes, I can see being upset if someone is "posing" as something they're not, and/or doing a terrible job of cooking a dish. The languages, cultures, and religions are very distinct, but the Greek and Turkish cuisines are deeply related.

Report Objectionable Content
+   3 people like this
Posted by Susan, a resident of Leland Manor/Garland Drive,
on Apr 26, 2018 at 5:49 pm


I'm looking forward to eating here. I love Greek food. We walked by the restaurant the other day. It looks Greek to me!

Report Objectionable Content
+   1 person likes this
Posted by midtown senior, a resident of Midtown,
on Apr 26, 2018 at 7:28 pm
midtown senior is a registered user.


I can't understand the bias. I've visited Turkey more than half a dozen times. They are lovely people. I've also enjoyed visiting Greece and the Greek antiquities in Turkey. What is the ownership and chef discussion about?
It's all Greek to me!


Just returned from 3 weeks in Greece. That country has fantastic and varied foods. My suitcase was filled with olive oil, honey, beans, olives and desserts. Can't wait to eat at Taverna!! Welcome to Palo Alto.

Craving B. Patisserie's perfect pastries? The San Francisco bakery is popping up in San Mateo next week
By Elena Kadvany | 0 comments | 11,407 views

Spend some quality time with your thermostat
By Sherry Listgarten | 11 comments | 3,888 views

Which Christmas Gifts are Lasting?
By Cheryl Bac | 2 comments | 1,489 views