Uploaded: Jan 22, 2018
The younger generation of a local restaurant family is opening their own project at 406 S. California Ave. in Palo Alto this spring.

Sun of Wolf is the brainchild of cousins Viari Lopez and Alexa and Paulina Sol, whose parents own La Fiesta Restaurant and Vive Sol in Mountain View, Palo Alto Sol (nextdoor to Sun of Wolf) and Quinto Sol in Redwood City.

"This came as a passion project of ours to bring the cousins together," Lopez said in an interview. "As a second generation without our parents' help, we figured, let's see if we could create a restaurant just amongst ourselves."

The trio originally hoped to open a bar after taking over the California Avenue space close to two years ago. They are now opening a restaurant that reflects their identities as the next generation of traditional Mexican restaurant owners. 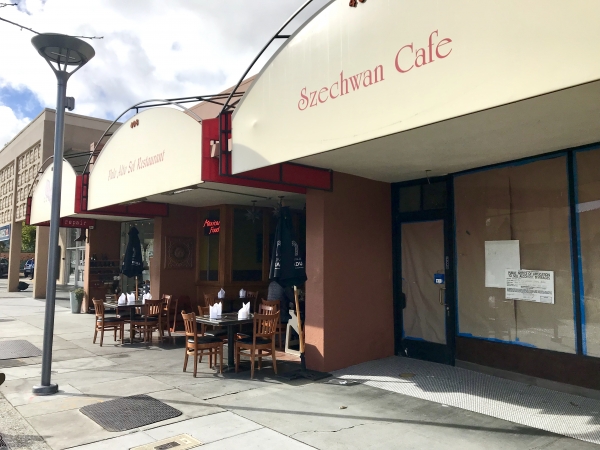 Three cousins are opening Sun of Wolf next door to one of the family's restaurants, Palo Alto Sol, on California Avenue. Photo by Elena Kadvany.

Lopez described Sun of Wolf's cuisine as "modern California comfort meets old-world Mexican flavors and richness," with traditional dishes such as aguachile next to their take on grilled cheese with tomato soup, using oaxaca cheese in the sandwich and a roasted poblano-tomatillo soup. Sun of Wolf will also serve a vegetarian lasagna with corn, sundried tomatoes, wild mushrooms and a family sauce that Lopez's aunt has been bringing to Christmas since the cousins were young.

There will also be a double cheeseburger and duck confit tacos. Sun of Wolf will start with lunch and dinner but down the line, add brunch, Lopez said.

Paulina Sol, a graduate of Le Cordon Bleu, is overseeing the food, while her sister is in charge of design and management and Lopez, the bar.

He's been winnowing down ideas for craft cocktails, aiming for a list of about 12. There's the signature "Wolf Bite" with mezcal, tamarind and allspice dram, a liqueur; the "Espiritu de Oaxaca" with mezcal, ginger and mint; and "The Valley," a pinot noir popsicle served with soda, vodka and smashed blackberries.

The space has been completely remodeled — it's "night and day" from the previous restaurant, Lopez said, with everything custom-built.

The three cousins, who were born and raised in Mountain View, ironically didn't work in the family restaurants growing up. Their parents wanted them to focus on school and sports, Lopez said. Each went down different paths after college, but eventually gravitated back toward the restaurant industry.

"We were never pressured to do this," Lopez said. "We chose to come and do it on our own."

Sun of Wolf is a play on their last names: Lopez derives from the Latin word for "wolf" and Sol means "sun" in Spanish.

Report Objectionable Content
Posted by charles reilly, a resident of another community,
on Jan 23, 2018 at 2:30 pm