There's never been a better time to be single -CNN

Google the link...It's a story about single people having a blast, despite what years of married-people studies tried to convince us. Not only are single folks healthier, happier, and more self assured, we weigh less and are having more sex! Tonight looking out my million-euro view in Granada, Spain, I certainly wouldn't object to Roberto from Seville's SeeByBike, Luca sweet Luca from the coast, or mountain Franzan joining me for a drink and a toast to the painter of this awe-inspiring landscape that stretches as far a front and around as one can see. Or for that matter, Mercedes, my gracious Airbnb host who lives just down the street, to join in salud as well.

Pero no hay problema, I'm having a wonderful time with just solo yo, a SAAZ (Damm) lager, and the sun, clouds, city, and snow-capped peaks that surround my rooftop terrace this afternoon.

This trip has transported me from a Sevillian wedding to an Atlantic hippie surf town, the western Sierra Nevada, and now ancient Granada, home to the majestic Moorish Alhambra palace.

I've learned everything about driving in Spain is smaller, and every car is banged up. They say the Spanish park "with their ears." I've learned the reason why so many non-native English speakers know some English is because of songs played on the radio. I've learned it's really hard to find a pepper grinder, broccoli and kale in Spain, and that I love home-cooked Spanish meals more than much restaurant faire (more veggies are served at home). And I've confirmed what I already knew - traveling and eating alone, no matter where you are in the world, can be wonderfully fulfilling and a down right blast.

It's hard to post remotely on this blog and pictures are really problematic. So we'll leave it like this for now and write more when the conditions allow.

Food Partying! In Spain, Solo Yo. 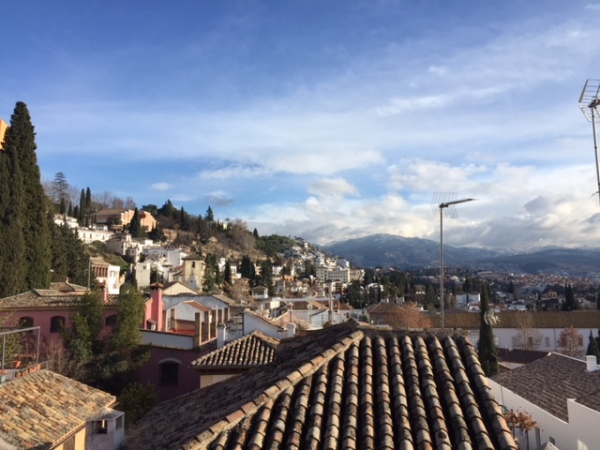 Report Objectionable Content
Posted by Novelera, a resident of Midtown,
on Jan 12, 2018 at 3:36 pm
Novelera is a registered user.


Thanks for this, Laura. I traveled alone to Spain a couple of years ago and had a fabulous time. Unlike you, I don't like to drive in other countries. I'm cursed with the worst sense of direction possible and I hate to get lost. But the trains are wonderful, especially the high-speed ones. Barcelona to Madrid in 3 hours!

I loved Granada. My Spanish is good. When I arrived at the hotel I'd picked from a guide book, the wonderful guy at reception spent a LOT of time trying to find me somewhere else to stay. After about an hour of this, I discovered that they did have double rooms. He was just trying so very hard to find me a more economical single somewhere else! Problem solved. I was happy to pay for the double room. I assume things are the same now. When I was in Granada, they told me it was the only place in Spain where you get free tapas when you buy a drink. I had a lot of fun in a bar there rooting along with the locals for the Spanish National Basketball Team.

The Alhambra is one of the most magnificent places I've ever been. I have dozens of great pictures. I did make a tactical error, walking up to Mirador San Nicolas instead of taking a cab up and then walking down! The view was worth it, even if I was sweating when I got there. And I was able to get a ticket for the afternoon visit to the Alhambra itself the following day.

Report Objectionable Content
Posted by musical, a resident of Palo Verde,
on Jan 15, 2018 at 7:06 am


Ah, Wanderlust! Solo travel is definitely an exercise in freedom and self-direction. Flexibility. More interaction with locals and other travelers, less inhibited. Adventure or escapade. I'll date my first trip through Spain as still under Franco, black and white compared to subsequent trips in color (East Germany similar impression). With backpack and railpass in my younger tight-budget days. Still managed plenty of great food in picturesque locales, mostly serendipitous. Trains much more modern now (as @Novelera appreciates), but olden times had charm, even in tourist season. Many all-night segments stuffed in a 2nd-class compartment with 6 or 8 others sporting a diversity of passports. Never long before introductions all around and bottles of wine magically appeared, paired with assorted cheese and breads. A Moveable Feast.

Report Objectionable Content
Posted by Laura Stec, a resident of Portola Valley,
on Jan 16, 2018 at 6:19 am


Oh I love when people wax poetic about travel. What a beautiful muse to be inspired by,is it not? Thank you readers. Viva adventure!

Report Objectionable Content
Posted by kevinbennett, a resident of Menlo Park: Central Menlo Park,
on Feb 6, 2018 at 1:44 pm
kevinbennett is a registered user.

Doing more with the natural spaces we have
By Sherry Listgarten | 8 comments | 3,221 views