Uploaded: Dec 19, 2017
In the past two years, 423 University Ave. in Palo Alto has been home to not one, but now three restaurants.

Now, Les Bizous has shuttered and been replaced by Taste, a Szechuan restaurant that soft opened on Dec. 8. 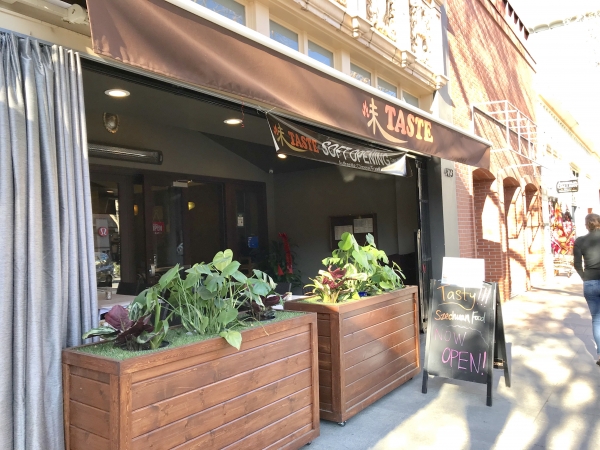 Taste is operating under new ownership, an employee said Monday, but the owner was not available for comment.

The restaurant's extensive menu is split into several sections, including seafood; poultry; beef and lamb; pork; sizzling plate; tofu and vegetables; griddle and clay pot; and noodles and rice. There are traditional dishes throughout, from kung pao shrimp and sliced duck to mapo tofu.

Specials also include dishes like lanzhou beef ramen and hot and sour mu shu with lamb and egg.

Why write a column about restaurant when you haven't even dined there? If you are a foodie, review the food and dining experience. Otherwise this column is ridiculous.


Announcing an opening is fine with me, without mentioning the food; alert is fine.

Birdnscrap, the mean spirited email is not needed. Elena: I look forward to your announcements, food mention or not. Your articles as a whole are well done.

Report Objectionable Content
+   8 people like this
Posted by Elena Kadvany, education reporter of the Palo Alto Weekly,
on Dec 22, 2017 at 8:18 am
Elena Kadvany is a registered user.


Birdnscrap, Dave: Thanks for your comments. It's a common confusion -- my blog is for reporting on restaurant news, such as openings and closures, not reviews. We have freelancers who write formal restaurant reviews for the Palo Alto Weekly and Mountain View Voice. I aim to be an objective source of dining news on the Midpeninsula, so it would be inappropriate for me to evaluate the food and dining experience.

For that content, please check out our Eating Out section in the newspapers and online!


Elena,
we appreciate the announcements about openings and closings.
Keep up the good work!


Thanks for the "comings" info, Elena, but do you have the "goings" info about Les Bizou? We loved Les Bizou, especially the foie gras entree that we would split as an appetizer. It would be great to know if the Les Bizou Chef has any plans to continue chefing locally.

Sutter and PAMF — protect your patients from coronavirus — not just your employees
By Diana Diamond | 31 comments | 3,052 views

What can you do with your EV battery?
By Sherry Listgarten | 6 comments | 2,021 views

‘This is just the beginning’: Boichik Bagels opening Peninsula outpost
By The Peninsula Foodist | 2 comments | 1,621 views