View all posts from Aldis Petriceks

Reflections on Death, Suffering, and the Beauty in Hospice Care 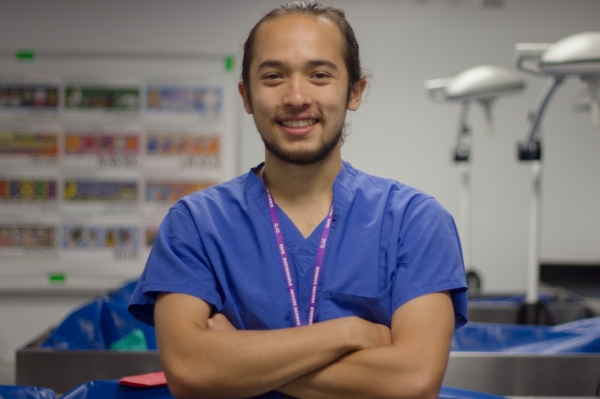 I spend much of my time as so many do: obsessed. Obsessed over success, over recognition, over comfort. I feel no guilt over these fixations, as the present culture makes them near-impossible to resist. But I do know what pride and selfish ambition can do to one’s personhood: they decay and deface genuine humanness, giving power to objects, ideas, and institutions in our everyday lives. So no, I do not feel guilt; but I do each day reflect on, and fight for, that genuine humanness.

And then I spend time with the dying, and need fight no longer. As a direct care volunteer for a local hospice organization, I am privileged to abide with people as they approach the end of life. I sit with those who embody both suffering and strength, vulnerability and courage, amidst that one universal inevitably. But I am not so arrogant to say I have discovered profound truths in the process, or learned perfect platitudes for the suffering – far from it. More frequently, I am humbled by visceral realities, and a lack of words.

So often in our daily lives, we feel obligated to say the right thing; more than this, to do the right thing. We dress up and clean up, presenting acceptable versions of ourselves to the world around us. But what remains to dress up, when a patient of mine sits weeping, lamenting her distant family and decaying health? What is there to clean up, when adult children of an Alzheimer’s patient stand heartbroken, watching their mother forget who they are, right before their eyes?

Nothing, and everything. Serving those at the end of life is a truly humbling, yet life-giving endeavor. It is an exercise in faith – and raw, unfiltered humanness. Take that patient for example, weeping over her family and mortality. In that moment, a million platitudes and consolations for the woman swirled around my head. I only needed to pick one: “Everything happens for a reason,” perhaps? Or maybe, “It’ll be alright in the end.” But the humbling power of hospice work is powerful exactly because it does not allow for easy, dressed-up answers. When one enters the room of a dying stranger, there is no room for pretense. One is forced to courageously confront life’s awkward presentations.

Despite all my readings and reflections, my greatest – my only? – power was the wisdom to reach out, and hold this woman’s hand as she wept. My most adept skill was the willingness to look in her eyes, in all her despondency and vulnerability; to show she was accepted not despite those imperfections, but because of them. If wisdom is proven right by all her children, that wisdom was proven right by the smile on this dying woman’s face, amidst tears nonetheless. Wisdom was proven by this woman’s laughter, and her flickers of meaning in the face of mortality and loneliness.

Or take another example, of the multitude which one finds in hospice work. Recently, I was assisting nurses and health aides in a multi-patient hospice facility. It was a dark Sunday evening, and we had just finished bathing, changing, and otherwise comforting most of the residents. I turned to see one last room, into which light trickled from the hall. I peered into that pitch-black room, and saw a man staring to his right. As I opened the door to check on him, the trickling light rushed in, illuminating an old picture on the nightstand: a young and handsome man, arm slung round a beautiful woman with an infectious smile.

I asked the man if I could sit with him. As it turns out, the handsome, well-built man in the picture was indeed him; the woman was his late wife of almost seventy years, who had passed away earlier this year. “She was my whole life. I loved her so much, and she always took such great care of the kids. She cared about me more than herself. I try to sleep a lot, because when I’m awake I miss her so much.” He said all this, and much more, in recurrent bouts of tears. I did not know what this man was dying of, nor much about his career, hobbies, or interests. All I saw at that moment – with every one of life’s nonessentials stripped away – was the man himself, and what he loved. The most cherished films, books, and images of romance or devotion were mere mockeries, secondhand counterfeits of this unceasing love.

The man was dying, yet had neither uncertainty nor regret on his mind. The living look for pain or promise in past and future; this man did not yearn for years forgotten, nor did he fixate on an eternity ahead. He was simply human, unapologetically consumed by a lifetime of love. I, an insecure and status-obsessed twenty-two-year-old, did not even attempt to form the right words. I put my arm on his shoulder, gazed with him at his beautiful wife, and wept alongside.

Moments such as these – deep-seated instances of awkward reality – help dissolve those cultural chains which enslave us to success and acceptance. Certainly, we remain human: as an aspiring physician, I wonder if medical schools will value my hospice work; as a person, I am tempted to view myself as some paragon of humanism. Thankfully, a quick glance at my pride and ambition is sufficive to remind me: we are all capable of taking goodness, even at its most pure, and twisting it into self-righteousness and vanity. But in those intimate moments when life is laid bare, we are given the gift of freedom. Freedom from our idols, from the forces which rip our attention away from what matters most. That gift is freely given by those who, through suffering, have seen life as it really is. Though of course, most asked for neither the gift, nor what must be endured to attain it – who would?

Nonetheless, when pomp and posturing are dropped, we find that true personhood comes to the fore. In a culture which turns virtues into abominations, those who endure through suffering present us with genuine opportunities for genuine personhood. As always, one must reiterate: the process is not pretty, it is not smooth, it is often uncomfortable.
But to suffer – and to bear the burden of those who suffer – is to be human. It is to see life unfiltered. And being human is something worth fighting for.


What a beautiful, humane article. Your wisdom and selflessless are way beyond your years. Thank you for sharing your wisdom.


Thank you so much. This is beautiful.


What a beautiful piece. I often feel fear for the future, future generations, and today's children. What kind of world will I, as a Gen-Xer, leave them? If your peers are anything like you, you'll obviously leave those children a kinder, gentler world. You've given me some hope today.


When my father was nearing end of life I did not even know the meaning of hospice care. But after having gone through it the best way I can describe most of the hospice workers is angels here on earth. There level of caring & patience and the comfort they bring to the patient and their family is astounding. What I found almost as astounding is how poorly compensated they are. It is a great injustice.

Thank you so much for this article and your service to others.


I found this to be an attractive and engaging article so I think it is particularly useful and proficient. I want to thank you for your efforts in writing this article,
kissanime Web Link


Thank you for this story and it is all too familiar a one for me, for I help people who have lyme and so many of our children are suffering with this and living compromised lives. soundcloud to mp3 Web Link I see people who can not support their families, unable to work and denied assistance on a daily basis.


The information you convey is very useful for me as a reader, hopefully, you for the future progress and prosper. Thanks. If you are looking for the best quality charger so you can visit here. Web Link Is the best option for you. Here you can also save your maximum money by using Anker power banks coupons. Thanks!

Craving B. Patisserie's perfect pastries? The San Francisco bakery is popping up in San Mateo next week
By Elena Kadvany | 0 comments | 11,584 views

Spend some quality time with your thermostat
By Sherry Listgarten | 11 comments | 3,924 views

Which Christmas Gifts are Lasting?
By Cheryl Bac | 2 comments | 1,530 views