The store will close on Nov. 22, unless it sells out beforehand, according to a sign posted in the store's windows at 250 University Ave.

"The end of our lease is here," the message reads. "A special thank you to all of our friends and regular customers. We had a lot of fun with you and loved being your candy store." 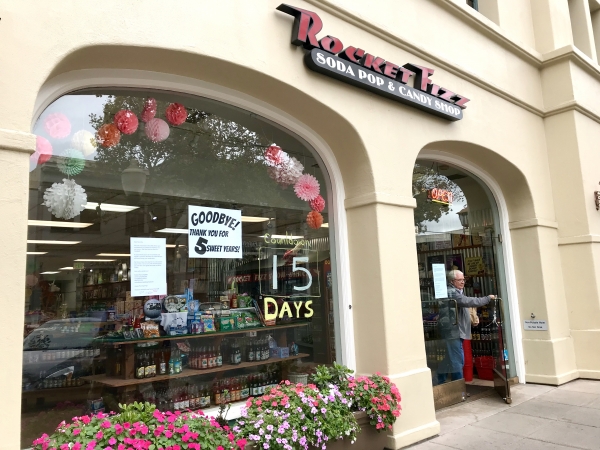 Rocket Fizz is a franchised chain that first started in Camarillo, California, in 2009. There are now dozens of locations across the country, including locally in Palo Alto and Mountain View.

The Palo Alto franchisees, husband and wife Chris Dunn and Lisa Pelgrim, wrote on Facebook that they will be combining with another Rocket Fizz in Campbell, which they also own. They did not immediately return a request for comment.

The couple opened the Palo Alto location in 2012. The shop sells novelty candy, toys and other memorabilia.

In a 2015 interview, Palo Alto store manager Nichole Daviar said she had sampled nearly every candy that Rocket Fizz sells. 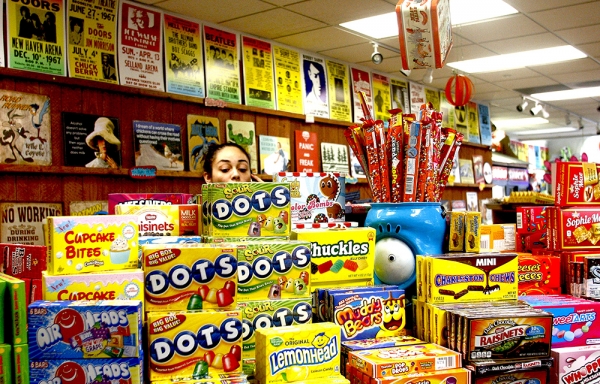 Rocket Fizz sells old and hard-to-find candies in addition to vintage-inspired tin lunch boxes which the store has suspended from its ceiling. Photo by Muna Sadek/Palo Alto Weekly.

Is there another store in existence that is without any redeeming human value than a hyper-candy store? OK, maybe a smoke shop.

Report Objectionable Content
Posted by Eric, a resident of Leland Manor/Garland Drive,
on Nov 10, 2017 at 12:01 pm


I'm not a big candy person, but I always found this a fun place to visit. Sorry to see them go.

Report Objectionable Content
Posted by chris, a resident of University South,
on Nov 10, 2017 at 12:44 pm


Another example of Palo Alto being over-stored.
Too much retail space is being wasted on failing concepts.

Report Objectionable Content
Posted by Father of 4, a resident of Menlo Park: South of Seminary/Vintage Oaks,
on Nov 11, 2017 at 2:35 am


This store was a family favorite and we will be sorry to see it go. It was a delightful place, unique in the neighborhood.

Report Objectionable Content
Posted by For Restoration of Civic Life, a resident of Another Palo Alto neighborhood,
on Nov 12, 2017 at 11:57 am


It probably can't survive in a retail environment increasingly taken over by the company town push of companies taking over downtown and Cal Ave. I wonder what day gym or high end restaurant will take its place? Hopefully not another office space. Now that some businesses argued out of the retail protection, others are sure to follow, like perhaps Spot Pizza. Pretty soon, parts of Univ?

For decades now, the only way to become stable and put down roots in SV (not just PA) has been to buy. For most people, this usually involves unbelievable sacrifice and compromises beyond anything they can imagine for years, even decades. Eventually, the equation changes because prices rise in an area of high global demand; buying stabilizes costs and eventually it becomes cheaper to own. People who come in new don't understand that the stable ones have been as desperate as they are, too, the housing cost problem is neither new nor different (eap if you look at the cheap cost of borrowing now, which many analysts neglect).

Given the outlook for cities in the Bay Area into the future, it may be that the only way to have a vibrant civic life is if cities do what resudents have had to do, which is bite the bullet and buy. Palo Alto should have a business tax on non-retail businesses that builds a fund to allow the City to buy up its retail areas at Cal Ave, Univ, and Midtown. It will seem expensive when it hapoens, but decades down the line, it will allow Palo Alto the luxury of having retail businesses and services that residents need, too. Furthermore, in exchange for reduced rents, the City could require retail renters to pay traditionally low-wage workers a much higher wage, and this would allow the City to address housing for traditionally low-wage workers by equalizing their pay, without the ever-growing astronomical prospect of building subsidized projects that never solve the problem and create social rifts. If this increased wages come from this arrangement, the City can reap an ever increasing benefit for no additional cost as time passes. Decades from now, it will seem as wise as hanging on to school properties.

Some of our billionaires could do this, too, as seems to be happening in Los Altos, but it's not likely.

Such an arrangement could also mean partnerships with Stanford and affordable space again for small startups, and a chance to prevent takeovers of downtown by growing companies like Palantir, who really should move where they can grow as Facebook did. Until that happens, it's going to be incredibly hard for unique resident-serving shops like these to stay here.

Report Objectionable Content
Posted by Mom, a resident of Downtown North,
on Nov 13, 2017 at 4:35 pm


Sorry to see RF go. It was one of the very few fun places for kids downtown to shop or browse at. No more toy store, no more University Art.