The restaurant, located in the ground floor of The Epiphany Hotel at 180 Hamilton Ave., recently submitted plans to the City of Palo Alto to demolish a space around the corner at 620 Emerson St. Nobu is seeking architectural review to build a two-story, 4,240-square-foot restaurant there, project plans show.

Nobu confirmed the expansion but said "we do not have additional details at this time." 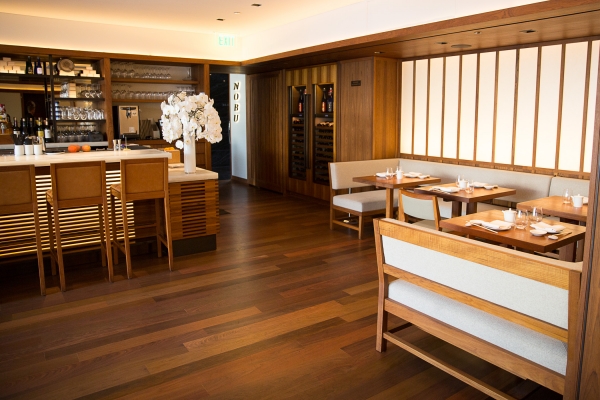 The city planner for the project, Samuel Gutierrez, said that Nobu has proposed to connect the ground-floor restaurant to the Emerson Street space, which was most recently occupied by Stanford Florists. The plans also include a proposal to build a "green roof" on the second floor, with a skylight in the dining room exposing the planted roof above.

The project is subject to review by the Architectural Review Board and will require a public hearing, which Gutierrez said will occur in the coming weeks after the city sends formal comments to the applicant.


Although I have not yet eaten at this Nobu, I am a huge fan, haven eaten at the 1st Nobu in TriBeCa,Manhattan (1st in 1995), as well as at Matsuhisa in LA, and Nobu in Las Vegas. It remains one of my all time favorite restaurants/cuisine, so although it's sad to be losing a florist, I favor the expansion of the restaurant.

Report Objectionable Content
+   8 people like this
Posted by OK then, a resident of Another Mountain View Neighborhood,
on Oct 20, 2017 at 9:59 am


A place for people to brag about going to, as if anyone with a life actually cares. This is the NEW Palo Alto though, filled with more people need to brag I guess, so make it bigger to hold all of them in one place ;)

Report Objectionable Content
+   6 people like this
Posted by Parking Where, a resident of Another Palo Alto neighborhood,
on Oct 20, 2017 at 10:54 am


The florist was retail which requires less parking than a restaurant under our City laws. That includes a rooftop serving area. So Nobu, if successful in its expansion, will have to come up with quiet a lot more parking spaces for customers than the florist had. It's the law. And it should not be allowed any namby pamby excuses by the City. Parking is too tight now. Where will Nobu find parking? And how will they pay for it? Don't even for a second think the city should subsidize parking costs directly or indirectly for these rich restaurant owners or residents should put up with the impact of being short-changed on parking.


Palo Alto did not require the Epiphany Hotel/Nobu restaurant to provide any parking when it was converted from an intermediate medical facility so it has already greatly increased the parking deficit downtown. The hotel does rent parking for its guests and provides valet access - but it still meant that it used up existing parking. No new parking was built.

Somehow the city planners considered the hotel with healthy guests to be equivalent to an intermediate care facility with patients who in no way were driving cars. I still don't know how they managed that. But no one objected when they applied for the permit to remodel, probably because PA makes a huge amount of money through its 14% hotel tax. So they were extremely cooperative as the city administration prizes more income above anything.

I urge everyone to contact the city council to make sure that additional parking is included with the conversion of the florist shop. Maybe the first floor can be parking with the two story restaurant on top of a parking garage. Contributing to a fund at a rate far less than the cost of new parking is no longer acceptable. That rate needs to be adjusted to reality, which shouldn't be hard since they are building a new parking garage and should know exactly how much it costs to build one parking spot.


You are right to be concerned about parking; however, you need more facts to make a case.

For example, how many hotel guests have cars? If the hotel is providing parking for the ones that do, isn't it better to use available parking than to build new parking?
For the restaurant, do you know whether it contributes to the downtown parking fund.
It would be super wasteful to build a separate garage for Nobu. That is exactly what needs to be avoided.

Once parking is no longer free in Palo Alto, I think at least you will be surprised to see how much parking is available. There is already a new garage slated to be built at Hamilton/Waverley. Let's see how the new pricing and the new garage work out before building spot parking every shi