Uploaded: Jul 25, 2017
Amongst the beef burgers with bacon and short ribs sliders on the menus of Gott's Roadside and Umami Burger in Palo Alto, there is now an entirely plant-based burger on offer.

The two eateries are now serving this burger from Impossible Foods, a Redwood City-based startup that has made headlines in recent months for creating a veggie burger that reportedly mimics the taste and texture of ground beef. The company has announced the launch of the "Impossible Burger" at several restaurants, which each create their own version with different condiments and buns. Prior to Gott's and Umami, many of the Bay Area restaurants partnering with Impossible Foods have been more formal, sit-down establishments.

They join Vina Enoteca in Palo Alto, which in March became the first Silicon Valley restaurant to serve the Impossible Burger. The Italian restaurant's version comes with sun-dried tomatoes, cavolo nero (or lacinato kale) and a sun-dried tomatoes mayonnaise on a poppy seed bun. 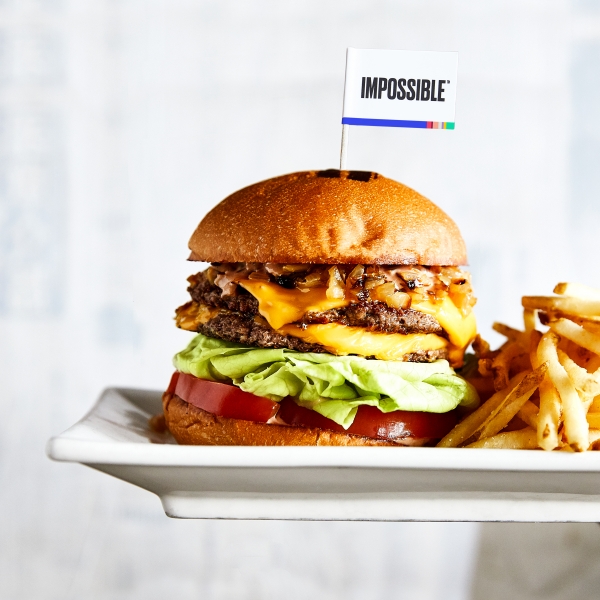 In Los Angeles, there was some outcry from vegan bloggers who complained about putting cheese on a vegan patty. In a statement, Umami noted that it "never claimed" its take on the Impossible Burger would be vegan, though it can be prepared vegetarian or vegan at the diner's request.

"The Impossible Burger patty was created entirely from plants making it vegan, yes, but it's intent is for people who love meat, not vegans," Umami said.

At Gott's, the meatless patty is served on its classic cheeseburger, also with American cheese as well as lettuce, tomatoes, pickles, and Gott’s "secret sauce" on a toasted egg bun. There, it's $10.99, according to Eater SF (compared to $8.49 for the beef cheeseburger). You can also sub the Impossible Burger patty on any Gott's burger. 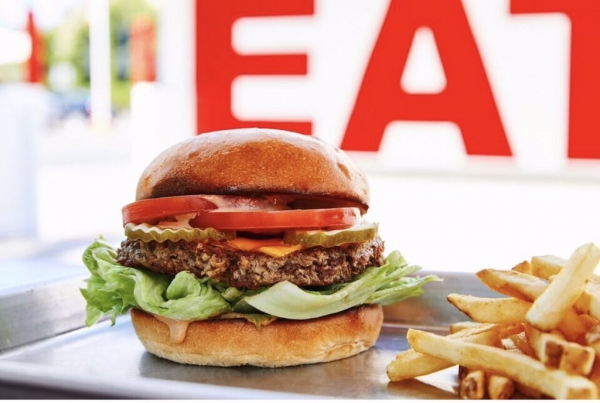 Gott's President Clay Walker said in an announcement that customers have been asking for an alternative like a plant-based burger.

Impossible Foods, which a Stanford University biologist founded in 2011, is working to disrupt the meat industry by creating a more sustainable, environmentally friendly burger. According to Impossible Foods, the burger uses 74 percent less water, generates 87 percent fewer greenhouse gases and requires 95 percent less land than conventional ground beef from cows. (Read more about the company and its mission here.)

Impossible Foods recently opened a manufacturing facility in Oakland that will allow the company to sell its burger at retail stores and internationally, according to an announcement. Production will launch in mid-August, Impossible Foods said, and the company plans to will ship burgers directly to restaurant clients "from coast to coast." The company is also developing additional types of plant-based meats and dairy products.

Bonus points to everyone involved! Thanks for becoming enlightened.
As for me, I've been a vegetarian for so long that I couldn't possibly eat "faux beef." I still have occasional nightmares about accidentally eating meat. . . .

Report Objectionable Content
Posted by Moderation, a resident of Another Mountain View Neighborhood,
on Aug 1, 2017 at 11:37 am


You know why everyone is trying to create a meatless burger? Because actual burgers are DELICIOUS!
I personally don't need heavily processed foods that try to reach the heights already reached by real food. I'll just stick to what is avail without all the processing and tweaking by food scientists.
Cheers for those who have been missing a good burger, you now have a processed replacement product. For those who already know, the real deal is still the real deal.

Some of the best jobs around
By Sherry Listgarten | 5 comments | 3,622 views

Fewer Michelin stars awarded on the Peninsula this year
By The Peninsula Foodist | 7 comments | 3,123 views

People and Relationships Never Stop Being a Work in Progress
By Chandrama Anderson | 3 comments | 2,058 views