Owner Thomas Wu, who has run Bay Area food truck We Sushi since 2011, took over the space after longtime Japanese restaurant Tokyo Subway closed in 2014. Wu had originally hoped to open in the fall of 2015.

Kyosho Sushi is a "contemporary" Japanese restaurant, per an online description, serving both lunch and dinner. The menu includes traditional sushi dishes as well as special rolls and entrees like duck breast and Wagyu beef tataki. Diners can also opt for omakase (chef's choice) — six courses for $60 or eight for $80. 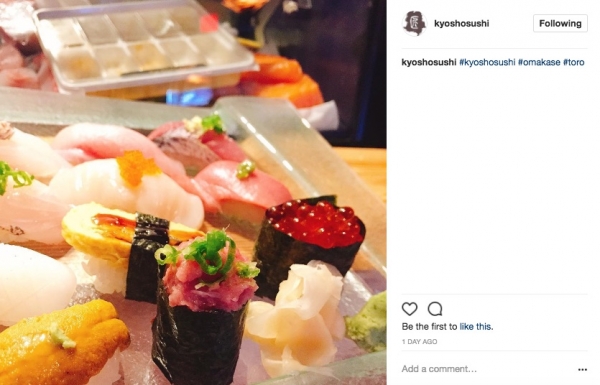 A selection of sushi posted on Kyosho's Instagram page.

Check out the menu here.

Kyosho is one of several new Japanese restaurants that have opened or are set to open in sleepy Menlo Park. Newcomer Octopus Sushi opened last month in the former Akasaka space on El Camino Real, and a restaurant called 32 Fahrenheit Japanese Bistro has put up signs at 604 Santa Cruz Ave.

Ditch the dining hall: Here are 16 spots near Peninsula colleges that are easy on the wallet
By The Peninsula Foodist | 0 comments | 2,335 views