Uploaded: Jun 21, 2017
Longtime Menlo Park sushi restaurant Akasaka has been sold to new owners, who plan to open another traditional Japanese restaurant in its place next week.

Jeffrey Son, the new owner, said he and his family took over the 925 El Camino Real space in early June. Jeffrey said he's not sure why the Akasaka owner decided to close but that "he did mention that he wanted to rest." 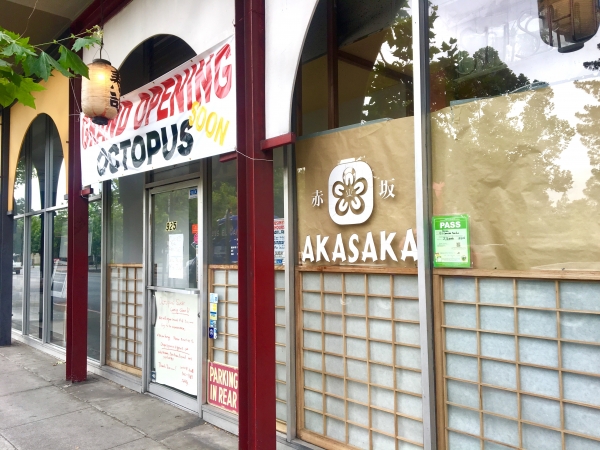 Octopus is set to open soon in Menlo Park. Photo by Elena Kadvany.

Jeffrey has worked in restaurants as a server since he was 14 years old and his father, who goes by Son, is a longtime chef. The family lives in Milpitas but has operated Japanese restaurants in Santa Cruz and Korea, where they lived when Jeffrey was young, he said.

Their new restaurant, Octopus, will serve traditional Japanese fare like sushi, rolls and tataki. All sauces will be homemade by Son, Jeffrey said.

Octopus will be open weekdays for lunch and dinner and on Saturday and Sunday, dinner from 4-9 p.m. Jeffrey said they hope to be open next week.

Octopus is one of several new Japanese restaurants coming to Menlo Park, including Kyosho Japanese Restaurant (in the former Tokyo Subway space) and 32 Fahrenheit Japanese Bistro (in the former Quiznos space).

Oh no! Akasaka was our favorite, very long time local Japanese restaurant. We have been going there for over 30 years (and seen several owners in that time...all of them so kind and welcoming)! Hope the new Octopus will be as good. Hope it's not going to be the kind of Japanese restaurant that charges $400 for a meal, like the new one opening in Los Altos!

This barbecue business was kicked out of Belmont. Now it's a Sunday fixture in Redwood City.
By The Peninsula Foodist | 2 comments | 4,284 views

Doing more with the natural spaces we have
By Sherry Listgarten | 8 comments | 3,108 views

Can the Memphis police behavior ever happen here?
By Diana Diamond | 17 comments | 1,221 views