Time To Get Stoned

You know it feels great when you indulge, and the season is short. It's time to enjoy our local stone fruit. Just coming into harvest, the season ends as soon as July for cherries, and September for most other stoners. So get out there and enjoy with cobblers and grilling delight. (For best results, grill stone fruit with butter, not oil).

Cherries (April-July): The earliest of the stone fruit, cherries demand prompt and quick consumption, with their relatively brief season and short shelf-life. There exists an array of flavors of colors, from lushly sweet to pleasantly tart, and from rich crimson (Bing, Brooks, Tulare) to blushing sunshine (Rainier). When shopping for cherries, seek out firm, plump fruit with unblemished skin and the stem intact. Cherries are highly perishable and will not ripen once picked, so eat them as soon as possible to get the best flavor.

Apricots (May-July): With their gold-orange velvety skin, these dense-fleshed flavor bombs are a late spring/early summer delicacy. Their easy-to-remove pit makes for easy snacking. One of the most sought-after local apricots, the Royal Blenheim, was introduced to California in the 1880s, and by the 1920s the variety dominated a thriving dried apricot industry, blanketing the Santa Clara Valley. Most of the original Blenheim orchards have been paved over, but a few farmers, such as Bill Crepps of Everything Under the Sun, still grow the intensely flavorful variety, available in limited supply in June. 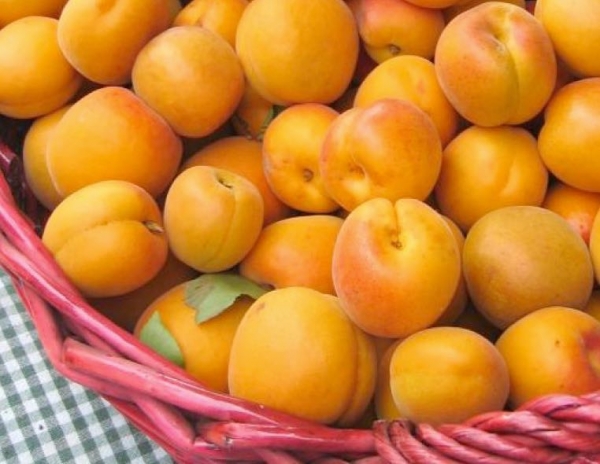 Peaches (May-September): At the height of summer, peaches have an intoxicating aroma and an almost too-good-to-be-real flavor—it’s no wonder some peach fans make the trip to the farmers market just for them. Thousands of varieties exist, and each one has its own personality. Some people prefer the pure, low-acid sugariness of a white peach, while others live for the tart/sweet flavor of a classic yellow peach. The sweetness of a peach also depends on how ripe it was when harvested. A peach will get juicier and softer as it ripens on a kitchen counter, but it will have only the amount of sugar it started with when it was picked. What changes is the chemistry; the acid content decreases as the fruit ripens, and so the fruit tastes sweeter.

Nectarines (May-September): Nectarines are actually cultivars of peaches. They are of the same species, but due to a recessive gene, they do not develop the characteristic fuzz (a protection against insects) of a peach, and instead have a smooth skin. The mutation also leads to a firmer, spicier tasting flesh. Like peaches, nectarines can be either freestone or clingstone, depending on how embedded the pit is within the flesh.

Plums (May-November): Over 2,000 varieties of plums exist, each with a diverse set of shapes and colors, and they are divided into the following six categories: Japanese, American, Ornamental, Damson, Wild, and European. Japanese plums are the most familiar and widely sold fresh-eating plum, typically round or heart-shaped with a dark red or peachy-yellow flesh. The natural whitish coating on many plums (and other plants) is epicuticular wax, or “bloom,” and it serves as a water repellant and protection against moisture loss and UV light.

Plumcots (May-September): The plumcot is one of the original plum-apricot hybrids cultivated by horticulturist Luther Burbank (also known for developing the Santa Rosa plum). Its makeup is 50/50 plum and apricot, generally taking on the appearance of a plum. Natural hybrids are the result of carefully controlled crosses by plant breeders. The breeder collects pollen from one variety with desirable traits and applies it to the blossoms of another variety. If the cross is fruitful, the breeder keeps the seeds and plants them. The seedlings are grown out, and several years later the breeder finds out what traits have prevailed.

Pluots (May-September): The pluot is a hybrid fruit made from a plum and an apricot, with the genetics leaning about three-quarters on the plum side. The fruit was created in the late 20th century by a plant geneticist name Floyd Zaiger by crossing multiple generations of plum-apricot hybrids. The skin of the fruit resembles that of a plum and the flesh is juicy and sweet due to its high sugar content. Zaiger has trademarked over 30 pluot varietals, including the popular Flavor King and Dapple Dandy pluots. 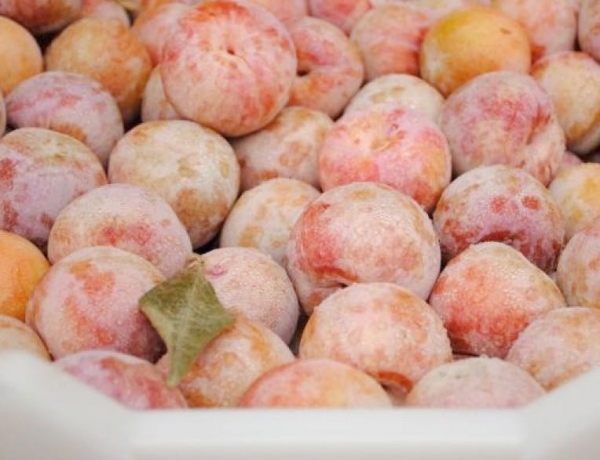 Apriums (May-June): Also developed by Zaiger, the aprium is a hybrid fruit whose heritage is about 75% apricot and 25% plum. In appearance, it resembles an apricot with its orange skin and flesh and slight fuzziness. In flavor, the aprium is very sweet (due to its higher sugar content) with a hint of plum. Substitute apriums for stone fruit in salads, pies, tarts and crisps, or enjoy them in their natural state. Look for them in May and June, and choose firm fruit that gives slightly under light pressure. 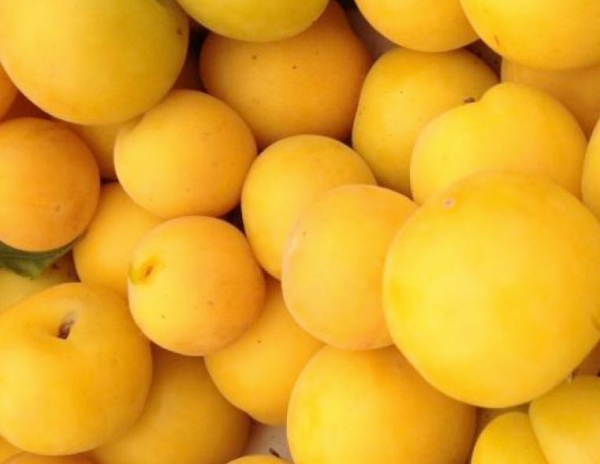 You credited some individuals for later contributions to these California drupe crops (Luther Burbank, Floyd Zaiger). But please don't forget Louis Pellier (1817-72), the agricultural innovator largely responsible for launching the original boom industry of the lower peninsula and south bay ("The Valley of Heart's Delight"), a full century before silicon industries arrived and prompted another boom (and a new nickname for the Santa Clara Valley, which still endures). Pellier incidentally also co-founded the historic Mirassou Winery in the 1850s.

Verbatim from an authoritative 1935 book on California:

"The Santa Clara Valley. . . is dominantly a fruit-raising district, with the prune crop by far the heaviest. The prune was introduced from Agen, near Bordeaux, in 1856, and the millions of trees now yielding sunsweet fruit are the outgrowth of the tiny grove then planted in the eastern foothills near Evergreen by Monsieur Louis Pellier, an agrarian benefactor, to whose memory due honor. Besides prunes, the valley specializes in apricots, and raises also pears, peaches, and cherries. You will marvel to see acres of trays holding prunes and apricots outspread, drying in the ardent sun. As to figs, grapes, and olives, they have thriven there since their introduction by the early Spanish settlers."

Report Objectionable Content
Posted by Laura Stec, a resident of Portola Valley: other,
on Jun 18, 2017 at 8:28 am


Oh interesting Max Hauser - you always add a delightful, informative touch. Thank you Louis Pellier (1817-72). The Valley of Hearts Delight, yes, we should mention this area was surrounded by fruit trees until the Silicon Valley usurped.One of the last remaining stands is the Olson Cherry Farm in Sunnyvale, which we Food Partied! about in Cherries and Berries Web Link

Report Objectionable Content
Posted by Max Hauser, a resident of Mountain View,
on Jun 18, 2017 at 12:32 pm
Max Hauser is a registered user.


"this area was surrounded by fruit trees until the Silicon Valley usurped."

Those fruit trees themselves had just a limited history -- the pit-fruit industry had, in its turn, usurped a region that was far longer in a natural state. Per beginning of this description (from the same source):

"The Santa Clara Valley was compared by Captain George Vancouver, commander of the English ship Discovery, who visited it in 1792, to a park laid out on some studied plan. This was when the country was in its native state, with many spreading oaks, and that aspect may still be met with here and there -- an effect pleasing and restful to the eye. Now the landscape is dotted with homes . . . everywhere reach the regular regimented rows of the orchards"

Slightly farther afield, but thrown in for historical value (again from Drury, 1935):

"The highlands above long were infested by mountain lions and wildcats, and early Spanish settlers gave the name Los Gatos (The Cats) to the locality. Now the feline marauders have vanished from the vicinity, though the hunter may still come upon them in the higher range."

"Milpitas, just beyond Warm Springs, is so prosperous a village that it can afford to laugh off the fact that it long was gently guyed as the Podunk of northern California."

Report Objectionable Content
Posted by Greg Nelson, a resident of Monta Loma,
on Jun 19, 2017 at 4:42 pm


Informative - thank you and commenters.
Must admit, was thinking of Bob Dylan's "Everybody Must Get Stoned"


Great coverage of fruit options. Would suggest folks consider spending a little extra and going organic whenever possible. You are what you eat (as the sage saying goes) and if you eat fruit that is not organic you will ingest and absorb far more pesticides than you'll get from organic food. Compare the extra cost of buying organic vs health care costs treating their effects. Costco is to be commended for now offering a decent amount of organic produce. Imagine if they totally switched to organic in all their stores! That would drive down the costs and encourage more growers to grow organic produce. A win-win-win.

Report Objectionable Content
Posted by gt stoned, a resident of South of Midtown,
on Jun 23, 2017 at 2:57 pm


getting stoned every day

This barbecue business was kicked out of Belmont. Now it's a Sunday fixture in Redwood City.
By The Peninsula Foodist | 2 comments | 4,566 views