The Chickery coming to Palo Alto

Uploaded: May 10, 2017
A Washington D.C.-based chicken franchise will be opening its first West Coast location in Palo Alto this summer, the company announced Wednesday.

The Chickery is a quick-service model that serves dishes like chicken fingers, chicken sandwiches and rotisserie chicken. The company plans to open in Barron Park at 3850 El Camino Real, which most recently housed a Papa Murphy's Pizza.

The Chickery describes itself as a "better chicken" franchise that makes its food from fresh, all-natural and never frozen ingredients. The company was founded in 2012 in Toronto, Canada, but later relocated to Washington, D.C. 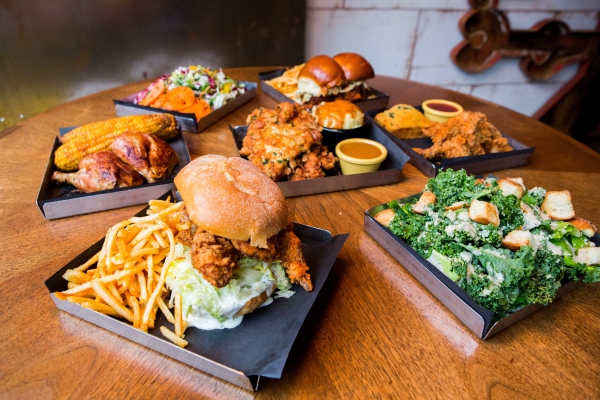 Canadian Food Network chef David Adjey and Danny Farbman, owner of a Toronto bagel shop, opened The Chickery together. In a 2012 interview, Adjey said he started restaurant (now a franchise) to give diners a higher quality fast-food option.

"Fast food has notoriously been so bad; it's over processed, there's stuff in our food that we can't even pronounce, and I thought, 'Okay, I'll do fast food and do it with real ingredients,'" he said.
"I don't think people deserve to eat inferior quality food at the expense of a big company being more profitable."

More than half of The Chickery's business is "done off premises," through catering and delivery partners, according to the company.

Stay tuned for an opening date this summer.

Years ago there was a semi fast-food restaurant at Town & Country called Petaluma Chicken. I miss it so much. Customers could order a cut of chicken (dark or light meat) with two sides: mashed potatoes, butternut squash, salad, etc. It was good, fast, and inexpensive. I ate there often. Unfortunately there was a fire that closed down the restaurant along with Hobee's, which was next-door. Hobee's reopened but Petaluma Chicken never did. I hope the Chickery is as good as Petaluma Chicken!

Report Objectionable Content
+   2 people like this
Posted by john_alderman, a resident of Crescent Park,
on May 10, 2017 at 6:14 pm
john_alderman is a registered user.


A fried chicken place also coming back to T&C in the Tava Kitchen space?

Report Objectionable Content
+   2 people like this
Posted by Elena Kadvany, a resident of another community,
on May 11, 2017 at 8:09 am


Hi John: I did see a restaurant called Chicken Dinner is opening there, but haven't been able to find out more information about it. If you have any tips, please feel free to email me at [email protected] Thanks!


Moving up in the world. Is it them or a franchisee? Did they give a reason for moving here? Getting a chick fil a plus feel. What is rotisserie fried? love the fast casual angle. Fast Good as Adria calls it. Go Canada


@Tod Ford: It's a franchisee. The business is a franchise model. They are probably moving here because they think they can make money. Note that over half of their business is catering/off premise sales, so they are probably counting on local businesses (high tech companies, the university) to help drive revenue. Rotisserie fried is described in the hyperlinked menu. It is roasted on a spit (rotisserie) then flash fried for a crispy skin. The flash frying last just long enough to crisp up the skin. They do not rely on the fryer to cook the meat, it is already cooked from the rotisserie.


Ah, the famous Taco Bell building, inspiration for local neighborhood residential architecture. My first thought was next to Happy Donuts, but that's Papa John's. I sort of miss the old KFC a mile up ECR at Cambridge (now another pizza place). Got a whole hot rotisserie chicken at Midtown Safeway a couple Fridays ago for 5 bucks; I think they are discounted every Friday. I'll have to check out the Chickery when they open, and perhaps learn something about quality. Hope they have tables out front on the patio where I can enjoy lunchtime sunshine and the vibrancy of El Camino traffic.


Ah, now you're conjuring up memories from long ago. In the 60's we heard the commercial "No cooking tonight, just order 'Chicken Delight'". They offered delivery service. We loved it. I don't think I ever tried to compare it with KFC, but it was good fried chicken, and they delivered it. Wonder whatever happened to them. Anybody know? Pizzas became popular at that time and maybe wiped out the home delivery chicken business.


It is spelled Caesar salad, not "Cesar" salad. Goodness.

Report Objectionable Content
+   1 person likes this
Posted by Elena Kadvany, a resident of another community,
on May 15, 2017 at 4:15 pm


Hi Elizabeth - Thanks for catching that!


I have been missing a place where i can get a dark meat chicken takeout on my way home. I used to stop at the Boston Market in the past. I cannot wait for The Chickery!


In the meantime.......visit the "Chickery" at the Sunday Farmers' Market on California Avenue. Chicken roasted on a side grill, with crispy fingerling potatoes and roasted Brussel sprouts, sprinkled with course grey sea salt. Delicious and delightful for a Sunday-evening dinner with a glass of icy-cold white wine. A little bit of paradise.


How great that there will be more options soon, between this place and Fast Tony's. Does anyone remember "broasted" chicken? I think it's similar to "fried rotisserie." Speed's in Redwood City used to make great broasted chicken. We used to enjoy a weekly Sunday dinner with friends who'd get the to go chicken dinner from Mayfield Cafe. We'd bring bread and salad, and it was wonderful.


Summer is almost over, but no Chickery, whats up?

Jumping on a bandwagon that ends up breaking down
By Diana Diamond | 18 comments | 3,454 views