Uploaded: Mar 21, 2017
If you're in Redwood City and you see a robot rolling down the street, don't panic. It's just delivering someone's burrito.

Starting this Thursday, on-demand delivery company DoorDash will be officially adding six robots to its delivery fleet in Redwood City. The small, compact robots — which have been spotted around Redwood City in recent weeks — roll on six wheels down sidewalks at about four miles per hour (about the same speed of a pedestrian, a DoorDash spokesperson said).

Given their size, they're best for delivering items like a burrito or sandwich and traveling shorter distances. The robots can can carry items within a 3-mile radius. 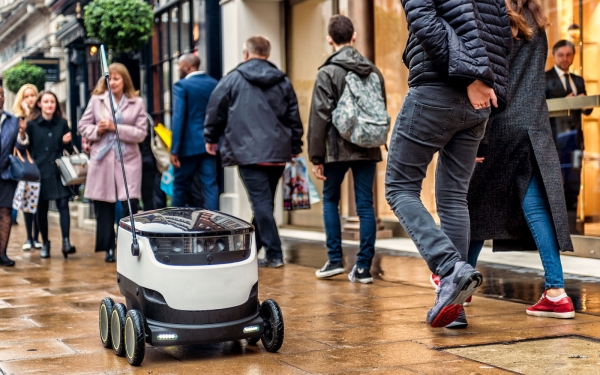 So if you're a DoorDash customer in the Redwood City area, you just might get a self-driving robot delivering your food instead of a human "Dasher" driving a car, riding a bike or scooter.

The robots are made by Starship Technologies, a London-based company that makes self-driving "delivery bots. The City of Redwood City approved a nine-month pilot program with the company last fall.

The robots are "inherently safe and can navigate around objects and people," Starship's website states.

DoorDash sees the robots not as a replacement for but as a complement to its human deliverers.

"Since Starship’s robots have a smaller carrying capacity and drive on sidewalks, they are better suited for carrying a small meal down the street, rather than a few pizzas," Stanley Tang, DoorDash, cofounder and chief product officer, wrote in a January blog post announcing the company's partnership with Starship. (Tang is one of three Stanford University students who founded DoorDash in Palo Alto in 2013.)

"We expect to use robots to deliver these smaller, short-distance orders that Dashers often avoid, thereby freeing up Dashers to fulfill the bigger and more complex deliveries that often result in more money for them," he wrote.

When a robot shows up at a restaurant, an employee must either walk outside and put the food inside the robot, or a human handler accompanying the robots during this pilot period will pick up the food, a DoorDash spokesperson said. 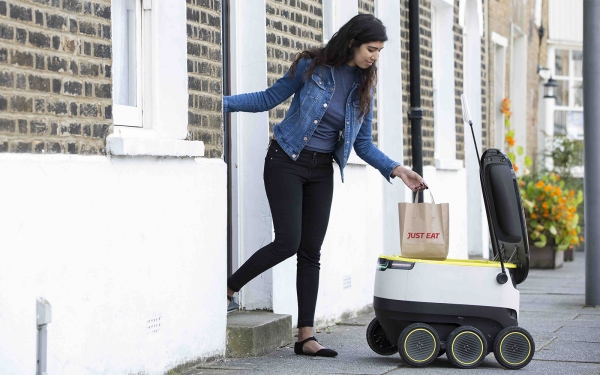 As soon as the food is inside, the door to the robot locks. DoorDash sends a link to the customer; when clicked, it unlocks the robot.

Like with a human delivery person, customers will be able to track the location of their robot-delivered orders and estimated time of arrival.

DoorDash will also look into using the robots to bring food from restaurants to a "local hub," like a parking lot, Tang wrote in the blog post. Drivers could then avoid having to find a place to park outside a restaurant or to wait for the food to be prepared.

During the pilot period, DoorDash will be collecting data to monitor if deliveries are made on time and how customers and restaurants are interacting with the robots, a company spokesperson said.

Redwood City is the inaugural city for the delivery bots, but more are on the way, DoorDash said. The company started testing the robots this week in Washington, D.C., and will soon roll out in Virginia, which recently became the first state to pass a law allowing robot deliveries.

The average speed of a pedestrian is about 2mph, not 4mph like this article states. Will these robots adjust their speed for the surrounding pedestrian traffic, or will they just ram into people? How much do these things weigh (and how much will they hurt if they hit you)?

Report Objectionable Content
Posted by Resident, a resident of Another Palo Alto neighborhood,
on Mar 23, 2017 at 10:24 am


These seem great and I expect we will eventually all get used to them everywhere.

However, what will happen when a parent allows their toddler to go and play with it and then the toddler gets hurt like the robot at Stanford?


Report Objectionable Content
Posted by member, a resident of another community,
on Mar 24, 2017 at 5:14 pm


how lazy are people becoming??? Can't take five minutes to get your own burrito? When will robots wipe your behind and flush the toilet?

State Street Market plans overhaul of its eateries as it cuts ties with Bon Appétit, triggering layoffs
By The Peninsula Foodist | 11 comments | 3,941 views

Doing more with the natural spaces we have
By Sherry Listgarten | 6 comments | 2,497 views