Uploaded: Jan 27, 2017
After about two years of shucking oysters on Castro Street in Mountain View, the owner of Shell Shock has cut her losses and replaced the restaurant with a more casual and less expensive concept: fusion tacos.

"The Shell Shock concept wasn't possible," she said Friday. Some customers loved it, but most people came in on weekends or for special occasions, and she often saw groups opt for other Castro Street options that serve more than just seafood, she said. 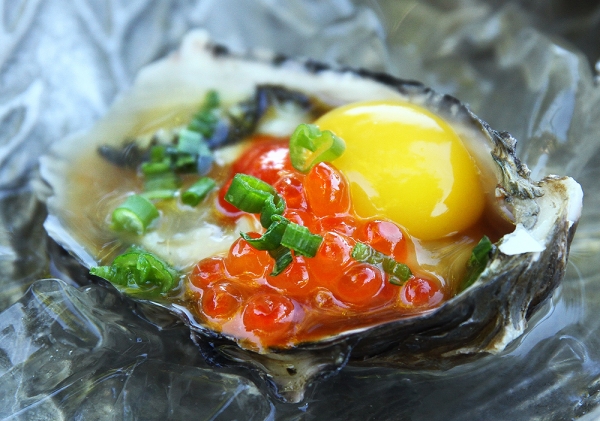 The "Dare Devil" at the now-shuttered Shell Shock featured a raw oyster topped with a quail egg, roe, ponzu sauce and Sriracha. Photo by Veronica Weber.

So she settled on a new concept — "international tacos," which she said has already drawn in more families, vegetarians and lunch-time customers than Shell Shock did.

The menu includes the restaurant's own taco creations, like miso-truffle pork belly with apple slaw, scallions and pickled daikon ($4.95) or the vegetarian crispy avocado with guacamole, slaw, corn crema and crispy scallions ($3.75). Diners can also build their taco by choosing a shell (soft corn, crispy corn, lettuce wrap of steamed bao), fillings (including meat, seafood and vegetarian options) and toppings.

There are also "snacks" like chicken wings, edamame, tater tots and salads, as well as a kids' menu.

East Street Tacos is open for lunch every day except Monday and dinner daily.

For the sake of the restaurant staff, I hope this concept clicks for the tastes of Mountain View restaurant diners. I don't care for Asian fusion cuisine, but no one can please everyone all the time.

Best of luck to the owner, this is the third restaurant in just over two years at this location (Honey Creek, Shell Shock, now East Street Tacos).


I really wish that someone would open a Norteño/Tex-Mex restaurant in the Bay Area. I feel like I haven't had real Mexican food (the kind that I am used to) since my last trip to Texas or northeastern Mexico.

Most of the Mexican restaurants around the Bay Area feel very foreign to me. I am not saying that they are "bad" or anything (not at all), but that they seem to offer food that is very different from the foods that many people on the eastern and northeastern parts of Mexico (as well as Texas) are used to.


This sounds really good, with a variety of dishes. It seems affordable and appealing. I hope it's successful. I'm always on the lookout for tasty veg cuisine.

How we eat away at our open space, even in Palo Alto
By Sherry Listgarten | 5 comments | 6,853 views

Three new restaurants from former Manresa chef David Kinch and his team are coming to Los Gatos
By The Peninsula Foodist | 1 comment | 4,151 views