Uploaded: Oct 3, 2016
Yet another new dining option is opening its doors at Stanford Shopping Center this week: True Food Kitchen, where the menu draws off an anti-inflammatory diet espoused by one of its co-founders.

True Food Kitchen will officially open to the public at the former (and now unrecognizable) Bloomingdale's site this Tuesday, Oct. 4, after spending the weekend soft opening with "friends and family" events. 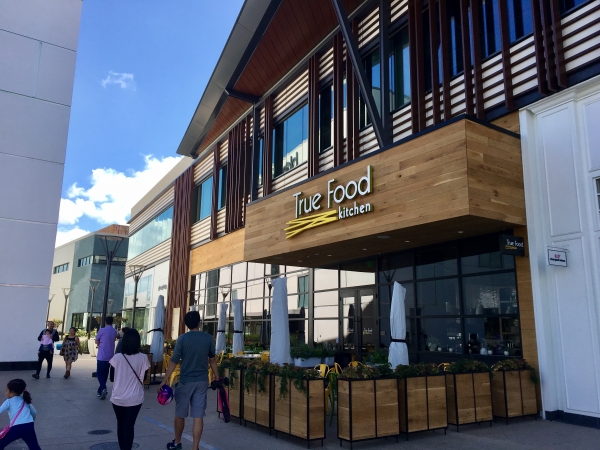 The weekend events were attended by both of the restaurant's co-founders, physician Andrew Weil, who is known for his work in integrative medicine, and Sam Fox, owner of Fox Restaurant Concepts. They opened the first True Food Kitchen in Phoenix, Arizona, in 2008.

The restaurant's food is inspired by Weil’s anti-inflammatory diet, which emphasizes fruits and vegetables, beans and legumes, whole grains, seafood and healthy fats. Vegetarian, vegan and gluten-free diners won’t have any trouble here, but neither will carnivores — there are several meat options throughout the menu.

"True Food Kitchen is based on the idea that food should make you feel better -- not worse," Fox wrote in an email. "And you shouldn’t have to sacrifice taste to live a healthier lifestyle."

He noted that diners will never find anything "processed, refined or manufactured" on a True Food Kitchen menu. The produce, milk and butter are organic, and the beef and fish are sustainably raised, he said.

Today, there are 14 True Food Kitchen locations throughout Arizona, California, Colorado, Texas, Georgia and Virginia, with more planned to open throughout the country in 2016.

Palo Alto is the company's first Northern California location, to be followed by a Walnut Creek outpost later this month. Fox said that Palo Alto -- "an active neighborhood of healthy-minded men, women and families" -- has "always appealed" to True Food Kitchen.

True Food Kitchen is the latest in a flurry of new eateries that has or will open this year at Stanford Shopping Center:


Thank you for posting that. I am a fan of True Food Kitchen however I didn't have as many opportunities to eat there as I wanted. Now I will have a chance. Also I am very happy that chain restaurants started regarding healthier food. That can be tasty too. [Portion of post removed.]
Melissa


With all due respect I would have to disagree with Neal. There are a lot of good things out there to eat but not all things are good when combined incorrectly. I have been on an "anti-inflammatory" type of diet since 1980 when there was no label for it. It does work. I am no vegan and at times will devour somethings I should not and pay for it. I watch my diet much closer than others because I have to, but that is me, not everyone. The bottom line is this is a chain taking its menu seriously regarding all aspects of the meal. It should be applauded regardless of the description given to be more accurate in what they are providing their patrons.


As a health foodie, and a serious devotee of the Santa Monica and Newport Beach locations of True Food Kitchen, I have been counting down the moments for this store to open. It is delicious and good food, no matter what you call it!

A fond farewell from the Peninsula Foodist
By paloaltoonline.com | 19 comments | 5,147 views