Creamistry has soft opened at 164 University Ave. and is holding a grand opening on Friday, Sept. 16. Head in on Friday from 5-8 p.m. to get a single "premium" ice cream for free. 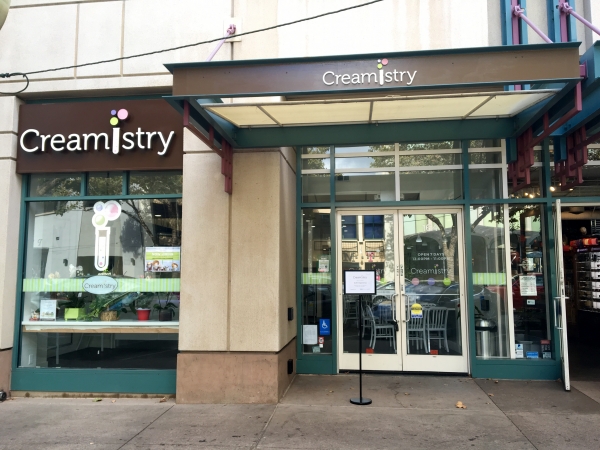 At Creamistry, customers can choose from several bases to design their own ice cream — "premium," organic, sorbet, coconut or Greek yogurt — and then supplement it with more than 70 flavors, and toppings. Flavors range from classics like chocolate, French vanilla and caramel to nutella, roasted black sesame, birthday cake, tiramisu, matcha green tea and French Toast Crunch. There are also special ice cream-based based drinks like an affogato (traditionally a scoop of vanilla ice cream and a shot of espresso), floats and “creations” (scoops of ice cream layered with sauces and toppings, served in a large cup). Ingredients are all-natural and organic, according to the Creamistry website.

The Creamistry concept is very similar to the neighboring Scoop Microcreamery on University Avenue (except there, the ice cream is made with liquid nitrogen in small batches rather than to order) and Smitten Ice Cream in Los Altos.

that business name is creaminal

Report Objectionable Content
Posted by Bob Johnson, a resident of Downtown North,
on Sep 13, 2016 at 11:29 am

Re: "that business name is creaminal," posted above by Poke Lover ---

Scoop and Creamistry appeal to my nitrogenous zone.

Report Objectionable Content
Posted by charles reilly , a resident of another community,
on Sep 13, 2016 at 2:19 pm


Wow ! Ice Cream made with Liquid Nitrogen ! That's what I call "cold comfort" ... Hope they don't get a chilly reception in Palo Alto ....

Report Objectionable Content
Posted by Another shortage, a resident of Downtown North,
on Sep 15, 2016 at 10:53 am


Another crisis! a shortage of words in the English language so these poor folks have to steal another store's name.

I'll stick with the real Creamery, thank you.


Just what Palo Alto needs: another overpriced ice cream or yogurt shop and another play on liquid nitrogen. What a novelty!

Report Objectionable Content
Posted by Reader, a resident of another community,
on Sep 18, 2016 at 7:37 pm

As for Peninsula Creamery, they are still around as far as I can tell.

Report Objectionable Content
Posted by pearl, a resident of another community,
on Sep 18, 2016 at 8:39 pm
pearl is a registered user.

Somehow my initial comment got deleted, but thanks for responding. I haven't visited Palo Alto for about 20 years, but when I did, the Peninsula Creamery was my favorite place to go. Along with a glass, they served your milkshake in one of those tall metal containers like creameries did years and years ago.


Report Objectionable Content
Posted by Bette, a resident of Another Palo Alto neighborhood,
on Sep 19, 2016 at 7:50 pm


I was once taught that an anthropologist could tell everything about a culture if it knew what it ate.

Wonder what would be said about Palo Alto?


Report Objectionable Content
Posted by Reader, a resident of another community,
on Sep 20, 2016 at 6:55 am

Well, one thing for sure, the anthropologist's analysis would not be solely based on Palo Alto restaurants because A.) Palo Altans cross city limits, B.) people from other towns come to Palo Alto for business/school/leisure, and C.) people don't exclusively dine at restaurants.

Plus, things change over time and much of today's Palo Alto restaurant scene is dictated by the current commercial real estate prices, particularly downtown where the commercial rents are quite high.

Take for example one location: the corner of University and Emerson. Over the years that spot has housed a Good Earth restaurant, upscale Lavanda, a pizzeria, and now Sam's Chowder House.

How we eat away at our open space, even in Palo Alto
By Sherry Listgarten | 5 comments | 6,478 views

From cioppino and whole crab to crab pot pie, here’s where you can get your Dungeness crab fix in the 650
By The Peninsula Foodist | 6 comments | 4,692 views