Poké is coming to Palo Alto

Uploaded: Apr 15, 2016
The trend that just refuses to quit throughout the Bay Area — poké — is coming to Palo Alto.

pokéLOVE will be opening soon at Town & Country Village, owner Alex Chan confirmed via email. He’s taken over suite 9, a space in "Building 1" at the El Camino Real shopping center, between clothing stores Joie and Francesca’s Collections (near where Scott’s Seafood was previously located).

Poké (pronounced poke-ay) — cubed, raw fish (from tuna and salmon to octopus and shrimp) often mixed with spices or add-ins — is a ubiquitous staple in Hawaii that’s been utilized (and some might say appropriated) to open fast-casual, Chipotle-style restaurant models throughout the Bay Area (not to mention Los Angeles, New York City and elsewhere).

Chan wouldn’t say much about the new Palo Alto restaurant, other than in the abstract:

"The concept is very different from what is currently out there," Chan wrote in an email. "It’s taking poke to a whole level. Crazy fresh fish, traditional and edgy toppings, vibrant homemade dressings, endless combinations, made to order right before your eyes. Food that is simple, straightforward, yet incredibly flavorful. My goal is to create a place where all food lovers can find their own perfect elusive balance of salty, sour, sweet, bitter, spicy, and umami in a fun, relaxed and chill atmosphere."

If the general concept of pokéLOVE is anything like the myriad fast-casual, dedicated poké shops opening in the Bay Area, it will offer customers a chance to build customized poké-based meals. Take Poké Bar in downtown Mountain View, where you can choose your base (salad, tortilla chips or, rice — white or brown), then your poké (including tuna, salmon, seared albacore, spicy tuna, octopus, shrimp, scallop and tofu), various add-ins like cucumbers, green onions, edamame, corn and jalapeño; and then top with sauces like ponzu, spicy mayo, sweet chili and wasabi mayo. 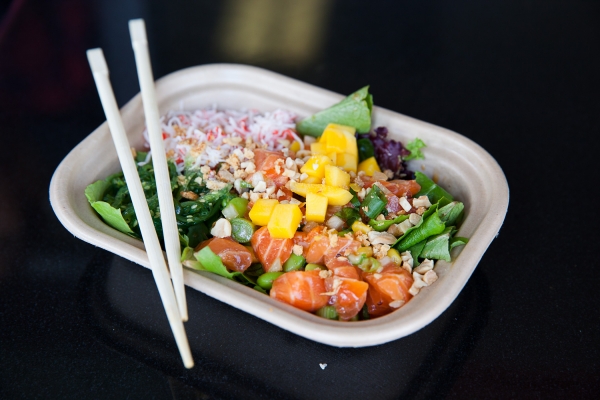 A bowl at Poké Bar in Mountain View with salmon poké, mango, edamame, crab meat and seaweed served on a bed of salad. Photo by Michelle Le/Palo Alto Weekly.

Also slated to open soon in downtown Mountain View is Poké Works, which offers the same kind of concept. Owner Kasper Hsu last said that he was aiming for an April opening but hadn’t set a date yet.

Chan said construction at the Palo Alto space is "progressing," and details about a grand opening could be coming in May. Stay tuned.

I love poke, but I am not a fan of the sauces that most of the California poke restaurants use. Some of the sauces are so thick and creamy that they mask the flavor of the fish.

I hope that this Palo Alto poke restaurant does a better job at opening than Poke Works in Mountain View that was supposed to open last December but is still not open for unknown reasons.


I wish people would choose another example than Chiopotle for the build-a-meal restaurant metaphor. For example, Asian Box, well known (better known?) in this area anyway. Because along with an ordering format, Chipotle also carries negative connotations, like food-safety violations (food-poisoning outbreaks going back several years in the news), not to speak of dull food carelessly served. A new, untried restaurant doesn't deserve that baggage.

To foodie: The accent-mark problem has come up here with other restaurants using the P-word and was explained. The word is meant to be spelled with a macron (bar) over the e, but this web site has problems with some characters and the accent is an effort to approximate.

I think the accent is often placed there to instruct people not familiar with Hawaiian pronunciation how to correctly say the word. The Hawaiian fish dish "poke" is pronounced differently than the well-recognized English noun/verb "poke." In English, often the 'e' isn't pronounced if it is the last letter of a word.

Note that with the accent, the word resembles the Nintendo game Pokémon (the pronunciation is similar) so it's not so far fetched to use the accent.

Anyhow, regardless of how these restaurateurs and writers are treating the Hawaiian "poke" word in print, I am happy to see more variety in our local dining scene.


Tried Pokeworks in New York, can't wait for it to open here. Hopefully, minus the loooooong line


We tried Poke Bar in Mountain View. It was OK. Anyone know how Pokeworks plans to be different? They are supposed to open a block away from Poke Bar. Also, how will this new Palo Alto place be different, apart from having the weirdest spelling yet of poke?

fyi - my favorite Bay Area poke so far is Aloha Fresh in Cupertino. For you Chipotle haters, they are very un-Chipotle-like.

Report Objectionable Content
+   1 person likes this
Posted by Poke Lover, a resident of Another Mountain View Neighborhood,
on Apr 15, 2016 at 5:52 pm


Most authentic Ahi Poke that I had in the Bay Area is the ones from from Takahashi Market in San Mateo, the rest of Poke here in California is nothing close to what you can find in Hawaii....

I love Asian Box. Every time i see an Asian Box, I chow down.

That's what she said.

Report Objectionable Content
+   1 person likes this
Posted by Palo Alto native, a resident of Charleston Meadows,
on Apr 20, 2016 at 11:22 am


@Miss Foodland Poke,
Absolutely! Poke made here tastes nothing like what's offered at Foodland in the islands!


You can buy black seed roasted sesame oil from Japan at olive crush in San Carlos. It's the best sesame oil to use with poke.


I think the accent is often placed there to instruct people not familiar with Hawaiian pronunciation how to correctly say the word. The Hawaiian fish dish "poke" is pronounced differently than the well-recognized English noun/verb "poke." In English, often the 'e' isn't pronounced if it is the last letter of a word. [Portion of post removed.]

Sutter and PAMF — protect your patients from coronavirus — not just your employees
By Diana Diamond | 26 comments | 2,969 views

What can you do with your EV battery?
By Sherry Listgarten | 6 comments | 1,959 views

‘This is just the beginning’: Boichik Bagels opening Peninsula outpost
By The Peninsula Foodist | 2 comments | 1,592 views