Uploaded: Dec 8, 2015
Ever since Su Hong To Go in downtown Menlo Park changed hands in September, new owner Jason Kwan and his staff have been furiously reassuring panicking customers: "Everything is the same; nothing has been changed!" (beyond the name of the restaurant, which is now Chef Kwan’s).

But Kwan’s other forthcoming Menlo Park restaurant, Yum Cha Palace, will be somewhat of a departure from the Su Hong sit-down location that he’s taken over, just steps away from the to-go outpost. 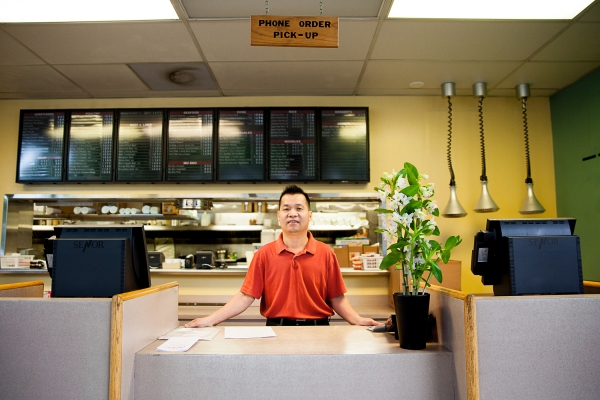 Jason Kwan, the owner of Jason's Cafe in Menlo Park, took over both the to-go and sit-down locations of longtime and much-loved Chinese restaurant Su Hong. He is pictured above in the to-go outpost on Menlo Avenue. Photo by Michelle Le/Almanac News.

Yum Cha Palace will serve traditional Chinese dim sum, Kwan said in an interview Monday. There will also be lots of fresh seafood, he said, such as live lobster and crab.

Kwan said he is currently waiting on city approval for remodeling plans for the space at 1039 El Camino Real, which has sat empty since it suddenly closed for remodeling in 2012. No opening date has been set yet, but he said he’s hoping for sometime in the next three to four months.

The original sit-down Su Hong restaurant opened its doors in 1977. Five years later, another location opened in Palo Alto, which is still in operation though under independent ownership.

Su Hong To Go opened at 630 Menlo Ave. in 1991 "to serve the ever-increasing number of repeat customers with to-go orders," the restaurant's website reads. Its last day of business before transitioning to Chef Kwan’s was Sept. 30.

Terrible head line. How is this goodby Su Hong, the place as been empty for 4 years. Should be more like" Yum Cha Palace to breathe life into long vacant space".

Report Objectionable Content
Posted by Chip, a resident of Palo Alto High School,
on Dec 8, 2015 at 4:53 pm
Chip is a registered user.


As a frequent customer at Su Hong since it opened, I hope for good food from the replacing restaurant. Jason's Cafe on El Camino has never pleased me, mainly because the combinations of sides & garnishes are odd. (Fruit salad with cheeseburgers?? Not grilled onions or mushrooms?)
With Mings, Mandarin Gourmet & Su Hong gone, I'd hope not to need a long trip to Chef Chu's. Fingers crossed here for much-needed good quality Chinese food.

Report Objectionable Content
Posted by Eric, a resident of Old Mountain View,
on Dec 9, 2015 at 11:43 am


Yum Cha Palace is kind of a cheesy name for a dim sum restaurant (if you speak Cantonese) but I hope it's authentic and successful, as for dim sum options are needed in the north County

Report Objectionable Content
Posted by Slow Down, a resident of Community Center,
on Dec 9, 2015 at 7:53 pm
Slow Down is a registered user.


@MPer - the takeout location being discussed closed a few months ago, not 4 years ago.

Report Objectionable Content
Posted by Food Lover, a resident of Menlo Park,
on Dec 9, 2015 at 9:44 pm


@ Slow Down - MPer was talking about the Su Hong sit down location on El Camino that was closed 4 years ago, not the take out.


Keeping my fingers crossed that it will be as good as Yank Sing bd83x in San Francisco.


This reads like the same article of a day ago, but I notice that the less flattering comments about Kwan's have been remove and replaced with complimentary ones. How disappointing that the writer is picking and choosing comments to please the advertiser. Doing so removes the credibility of the article. If readers can't rely on honest representation, why bother reading about the restaurants mentioned by this writer.


Will Yum Cha have a hard liquor bar? Su Hong poured the best drinks in town, next to Carpaccio. While the bar atmosphere was not as nice as Carpaccio, the regulars were as interesting as the characters in "Cheers". Good luck to Mr. Kwan - his breakfasts at Jason's are the best in town and his decision to not try to "fix something that ain't broke" at Su Hong to Go shows me he's a smart restaurateur.


Though ive only tried Kwans Chinese Chicken salad it tastes nothing like Su Hongs to goes ever did. Im so dissapointed. Maybe Su Hongs former owners didnt share their recipe?

Report Objectionable Content
Posted by LouisGrace, a resident of Atherton: West Atherton,
on Dec 11, 2015 at 8:27 am


Glad to see a post from you--always check your blog periodically, and just figure if the blog is still here! I think your blog was one of the first I ever left a comment on, so I'm not going to let a little time between posts stop me from seeing if there's anything new... :) Take care, and thanks for posting!

Report Objectionable Content
Posted by pogo, a resident of Woodside: other,
on Dec 11, 2015 at 6:24 pm
pogo is a registered user.

When you author a blog, you are free to delete comments you deem incorrect or disrespectful... or for no reason at all. This is no more a first amendment issue than is deleting comments on your own Facebook page.

Elena is a terrific writer and blogger. If you don't like her style, don't read it or write your own.


Pogo. If a blog is edited to promote a business by removing criticism of that business, then it is not a blog but an advertisement. When a blog appears under the auspices of a business, the Almanac, it has a responsibility to that business to act with integrity. Without impartial comments, the blog is indeed not worth reading.

Report Objectionable Content
Posted by Elena Kadvany, a resident of another community,
on Dec 15, 2015 at 8:43 am


vanished: I can assure you that my blog would never be edited to promote a business or advertiser. I have not removed any portions of this story and only edited a portion of one thread (above) that was promoting an external website.

You might be referring to another thread of comments on the Almanac News version of this story, which you can find here: Web Link

Report Objectionable Content
Posted by puffnstuff, a resident of another community,
on Jun 14, 2016 at 2:41 am


I was a Faithful and Loyal Customer of the Menlo Parks Su Hongs and it is surely missed. I started going there when I was 13 IN A FEW MONTHS i WILL BE 50!!! WOW I was just out of St. Raymond's and just starting M-A. and OH those Pot Stickers were a daily craving. These were the years when the location was in the old Menlo Theater which was located on Santa Cruz ave ,its now the Left Bank.
WOW ,how things have changed. They later moved to the location on El Camino Real. The "Hong" as we referred to it was full of memories for me and my friends . Into the college years we enjoyed Andy's excellent drinks a little too often. He made the best Long Island Iced Teas . WOW WEE how Oh we had fun. I know we gave David and William the owners some laughs or at least they faked it enough to always make us feel welcomed no matter how loud our group got. Laughing Loudly ,but not acting too crazy was what we did, not out of control ya know, we all had home training.!!
Long story short, it is missed and the food is not even close to what Su Hongs served. We never had a bad meal there EVER. Now the flavors in the food are long gone. It has to kick it tastes like a warmed up TV Dinner, no joke. I keep trying it, in hopes it will gets better, but they are only hopes it only gets more expensive. I just went to the Chef Kwain tonight and once again let down.
I think I will have to let the Su Hongs memories Rest in Peace, I'll keep my happy memories and move on.
Good Bye fun times , it's over....The food and fun will never be the same in anyway...


Any news on when Yum Cha Palace might open?

State Street Market plans overhaul of its eateries as it cuts ties with Bon Appétit, triggering layoffs
By The Peninsula Foodist | 11 comments | 3,776 views

Doing more with the natural spaces we have
By Sherry Listgarten | 6 comments | 2,293 views