The 4,400-square-foot space at 420 Ramona St., formerly the longtime home of Mandarin Gourmet, has been completely transformed. The exterior is unrecognizably chic, painted dark navy and with enormous wooden doors now serving as the entrance to the restaurant: 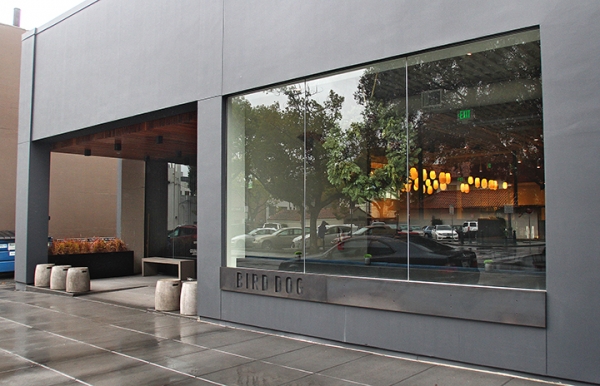 The interior of the old Chinese restaurant has also been completely revamped. Read Daryl Savage's recent ShopTalk column in the Palo Alto Weekly for more detail about the revamp.

Chef Robbie Wilson and his wife, Emily Perry Wilson, of Mattei's Tavern in Los Olivos, partnered with Chamath Palihapitiya and Brigette Lau, a Silicon Valley power couple (they're behind The Social+Capital Partnership, a venture capital firm based in Palo Alto) to open the restaurant. The two couples were introduced in late 2013 by Charles Banks, a Southern California investor and partner on a major revamp of Mattei's Tavern.

Robbie Wilson, who is now living in Menlo Park, did his culinary training in France. He has since worked in many renowned kitchens, including The French Laundry in Yountville and Nobu in New York City. In 2013, the Wilsons and Banks restored the 1886 building that housed Mattei's Tavern and reopened the restaurant with a modern, seasonal menu that draws on the bounty of the Santa Ynez Valley.

Bird Dog will open tonight with a limited menu that’s split into three sections: raw, proteins and vegetables/grains. “Raw,” which will draw on Robbie's background in Japanese cuisine, includes items like big-eye tuna with Asian pear and a padron mousse and wood-grilled avocado with ponzu and ocean lettuce. Proteins include a wagyu ribeye “heart,” wagyu striploin, salmon and chicken thigh. All of the meat items will be kept at 5 ounces or less, Robbie said. Vegetables/grains range from steamed rice with smoked clam broth, mung beans, roasted peanuts, crispy chicken skin, cilantro and mint to spicy eggplant with za’atar, quark (a German cheese), pine nuts and parsley.

Robbie said that the three menu sections were inspired by his own dining experiences and preferences -- loving raw seafood, like sashimi, as well as meat and vegetables, but not being able to get all three done well in one place. So at Bird Dog, diners can mix and match without overcommitting, he said. The menu will change with the seasons but always be split into those three categories.

The menu will expand after this week’s soft opening, Emily said.

There are also cocktails and wine. Bird Dog's bar will focus on doing the classics impeccably well with local spirits, Robbie said. None of the "smoke and mirrors" of trendy drinks with long ingredient lists, he said.

The wine list was curated to be "simpatico with the food," Robbie said, but you won't see any wines available at your local grocery or even wine store. The menu will be populated with "outliers," both New and Old World, Robbie said.

And what's with that name? Bird dog is both a term -- "It means, by definition, to seek out and return with dog(-like) determination," Robbie explained -- and an actual breed that is trained to hunt or retrieve birds or small game animals.

"When you seek something out with determination of bringing it back -- essentially, we’re doing that every night," he added, comparing a dog's hunt to finding locally sourced ingredients and bringing them to diners.

Bird Dog will serve dinner daily at 5 p.m. with the bar opening at 4:30 p.m. Bird Dog will be closed on Sundays for the month of November.

really? is a registered user.


And there i was hoping for a chicken hotdog stand....

Report Objectionable Content
Posted by Nora Charles, a resident of Stanford,
on Nov 5, 2015 at 1:59 pm

Report Objectionable Content
Posted by Reader, a resident of another community,
on Nov 6, 2015 at 8:50 am

Well, it's better than calling them "Animals" on a restaurant menu.

Of course, animals are not the exclusive source of proteins. There are vegetable sources of proteins. A few examples are: legumes like peas and beans, quinoa, tofu (processed soybeans), leafy greens like spinach, some seeds (poppy, sunflower and others).

Calling the section "Meat" would not be right, since the word is typically used in a culinary/restaurant to describe beef/pork/veal/lamb and not poultry nor fish.

Report Objectionable Content
Posted by really?, a resident of Menlo Park: other,
on Nov 6, 2015 at 9:48 am
really? is a registered user.

For Nora's sake, my next restaurant venture will be a 'kill your own' venue on University Avenue where a live pig is brought to your table, you're then given a knife to butcher it (or gun if you prefer), then it's sent back to the kitchen for the freshest sausages you can imagine!

And yes, recatagorizing 'meat' as 'protiens' would never be done an my new restaurant.

Report Objectionable Content
Posted by Plane Speaker, a resident of Crescent Park,
on Nov 7, 2015 at 5:11 pm


"Dog" doesn't belong in the name of a restaurant. The idea is cool, and I will try it, but someone slipped on the name.

Report Objectionable Content
Posted by Plane Speaker, a resident of Crescent Park,
on Nov 7, 2015 at 5:13 pm


"Dog" doesn't belong in the name of a restaurant ... but, maybe it will help keep down the crowds if the food is really good.

Report Objectionable Content
Posted by Plane Speaker, a resident of Crescent Park,
on Nov 7, 2015 at 5:20 pm

Report Objectionable Content
Posted by Truthseeker, a resident of Duveneck/St. Francis,
on Nov 9, 2015 at 5:19 pm
Truthseeker is a registered user.


I always thought veg and non-veg items should be marked as "Save the animals" and "Save the plants", if anyone cares about my ideas, which they probably don't. The strangest term in contemporary dining is "gastro-pub". I don't find reminders of where my meal is headed to be appetizing.

Report Objectionable Content
Posted by Mark Weiss, a resident of Another Palo Alto neighborhood,
on Nov 10, 2015 at 12:20 pm

I have to say that to my eye or ear the path from "hydrogen jukebox" from 1957 to "bird dog: raw, proteins, vegetables / grains" is such that they have nearly lost me, semiotics-wise. In music terms, sounds like a bunch of clams.

Do people still use the word "semiotics".

Hot is cool is sick is bad is good is ridiculous is serious. : )


"Laundry" doesn't belong in the name of a restaurant ... but, maybe it will help keep down the crowds if the food is really good.