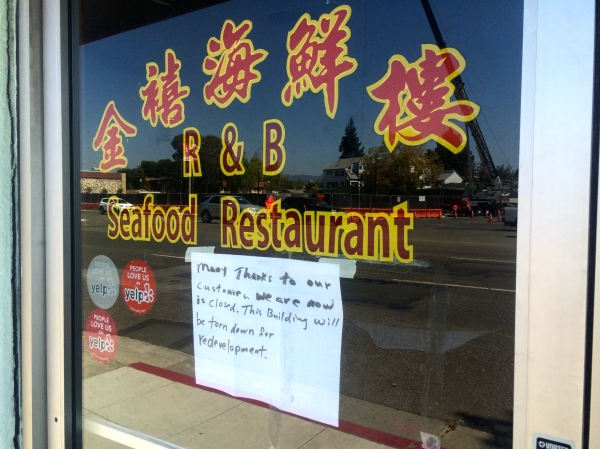 The city's Architectural Review Board approved in January 2014 a 9,571 square-foot, three-story building for the site with financial services on the ground floor, offices on the second floor and residential units on the third. It will replace the one-story building that housed R&B Seafood and Peninsula Locksmith.

A rendering of the planned three-story mixed-use development for 2209 El Camino Real in Palo Alto. Courtesy City of Palo Alto.

The city planner for this project, Margaret Netto, said Tuesday that no drawings have been submitted for the development yet, but she "assume(s) it''s moving forward."

Netto said the project, approved more than a year ago, likely won't fall under the city's new "urgency ordinance," which the City Council passed in May to protect retail by prohibiting the conversion of ground-floor retail to offices.

R & B Seafood opened in 2009. A few fans of the neighborhood spot turned to Yelp last week to lament its closure:

If you want high-quality cantonese-style chinese food, I recommend Hong Kong Restaurant, also in Palo Alto (3691 El Camino Real). The place is not fancy, but the food is very good, and reasonably priced.


I realize that every city will have to become denser at one point or another, but I feel that city of Palo Alto does not have good planning to adjust to this change. I moved here 5 years ago attracted by the small town feeling despite it is in the middle of silicon valley. There are many small unique shops around town. You can always find franchise store in every city. Most of the architectural despite aged blends in with one another. Since the last mayor, many new small rise building have been built to replace this small building. Many restaurant and shops were force out to become a new office building. There is nothing wrong with office building, but it should be balance or idea to relocate this small shop. If this continue, Palo Alto residence will have to get service cater from neighbor city since everywhere they go will be just office and it close after 6 PM. I hope it is not it will be, but certainly that way. Big IT company gives tax to city, but city does need the small businesses as well.


Finding the services and quality of life to be declining in Palo Alto. Not going to fight it anymore, just going to lower the bar for what our expectations are for a future here.


Yes, things are changing around here.

And they will continue to do so, just like they have for the last two hundred years.


This appears to be another grossly underparked development - and the ARB has approved it.


i hope it can still be appealed to the city council and turned down. it is so wrong in so many ways


Second the recommendation for Hong Kong Restaurant. Been a customer since they were in Mountain View. My mom's side of the family is from Hong Kong, and it's the most authentic Cantonese food to be found in the area


Of course this project was approved by the (rubber-stamping) ARB. When will it go before the CC, and what are the chances of such a massive project with no ground-floor retail receiving approval???

A fond farewell from the Peninsula Foodist
By paloaltoonline.com | 21 comments | 5,283 views