Uploaded: Aug 3, 2015
Dinner and a show, anyone? At the end of this month, downtown Palo Alto French restaurant Zola is launching a Monday night pop-up series focusing on "rare and unique" wines alongside "exclusive music driven dinners," including one featuring a San Francisco Chamber Orchestra string quartet.

The pop-up series will kick off with a Marcassin wine dinner on Monday, Aug. 24, at 7 p.m. featuring wines from the boutique Sonoma coast winery. The event description calls Marcassin owner Helen Turley "one of the most influential winemakers in California" and one who was "instrumental in the creation of the cult wine phenomenon."

Savor champagne to start, and then a 2009 Marcassin Chardonnay alongside chilled Maine lobster (with tomato, avocado, vanilla and tarragon). The main course, roasted Sonoma duck breast with a mushroom crepe and "Marchand de Vins" sauce will be paired with a 2009 Marcassin pinot noir. Dessert comes in the form of a tarte fine aux pomme et aux figues.

On Monday, Sept. 21, at 6:30 p.m., the San Francisco Chamber Orchestra's "Haydyn Project" will perform at Zola for an "East of Paris" themed dinner.

Featuring San Francisco Chamber Orchestra concertmaster Robin Sharp and Music Director Ben Simon, the string quartet will be serenading during dinner prior to the performance as well as for the ensuing dessert course.

Tickets cost $165 per person, including tax and gratuity but excluding wine pairings.

In October, the restaurant will turn its focus to Napa's Mayacamas Vineyards for "what is sure to be an evening of abundance and lavishness," the event description reads.

Mayacamas Vineyards, located in the Mayacamas Mountains that divide the Napa and Sonoma valleys, began as a stone winery that was dug into the side of a dormant volcano crater in 1889, per the winery's website. Fifty-two acres of vineyards have been planted on mountainsides ranging from 1,800 to 2,400 feet above sea level.

Zola ownership got its hands on several vintage Mayacamas cabernets this past spring and will be pouring three vintages from 1989, 1995 and 2002.

Get your taste for $195 per person, including tax and gratuity. There will be a three-course dinner; the dishes have yet to have been announced. 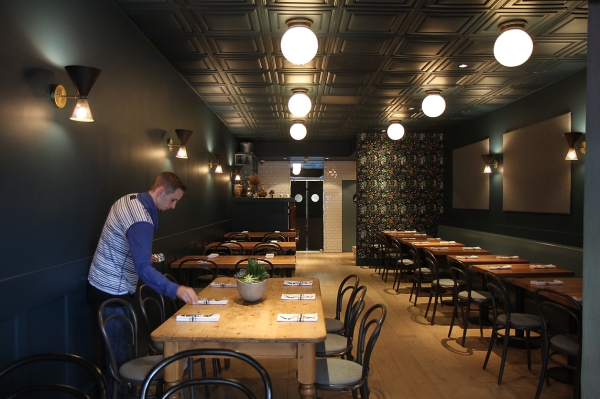 Zola in downtown Palo Alto will be hosting a series of special pop-up dinners throughout this fall. Photo by Michelle Le.

"We hope to bring a unique, interesting and though provoking experience through these dinners and look forward to continuing our support of community enrichment," a release on the series reads.

To purchase tickets for any of the pop-up dinners, go to eventbrite.com/zola.

Sutter and PAMF — protect your patients from coronavirus — not just your employees
By Diana Diamond | 28 comments | 3,011 views

What can you do with your EV battery?
By Sherry Listgarten | 6 comments | 1,996 views

‘This is just the beginning’: Boichik Bagels opening Peninsula outpost
By The Peninsula Foodist | 2 comments | 1,607 views