Uploaded: Jun 29, 2015
One block of California Avenue is returning to its boozy roots with the opening of Calave, a wine bar that occupies the site once home to Palo Alto's Mayfield Brewery.

Owner Lori Romero found out about the historical significance of the 299 California Ave. space after she decided to split the hair salon she currently owns at that address in half and open a wine bar. Romero lives in Campbell, but spends much of her time in Palo Alto, where both she and her husband work. She said they often griped about not having a lot of places for people their age (she's in her 40s) to get a nice glass of wine and socialize. (Though they actually came up with the idea for opening their own place while with another couple at The Wine Room on Ramona Street downtown. This couple, James and Becky Laden, along with Romero's husband Dave Villarreal, all partnered to open the wine bar.)

And thus, the idea for Calave (pronounced as if there's an accent over the "e") was born. After hosting several soft openings with friends and family, the wine bar officially opened to the public this Monday, June 29.

In February, after closing her salon, True Salon, to start construction, Romero described Calave to me as an upscale, "prohibition meets modern day" wine bar. The renovated space itself does have an upscale feel, with plush couch seating and a sleek wraparound bar in the center of the space, but still feels comfortable and casual. There are several outdoor tables along California Avenue and Birch Street as well. 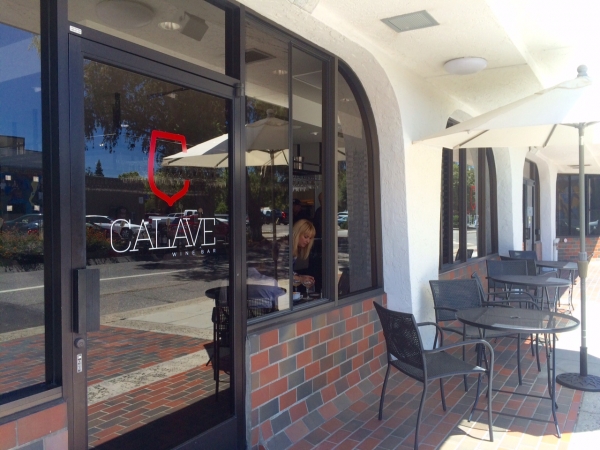 Above: The exterior of Calave wine bar along Birch Street in Palo Alto (and owner Lori Romero in the window).

Though the opening menu is subject to change as the Calave crew works out the kinks, you'll find wines from all over ? Napa Valley, Russian River Valley, San Luis Obispo, Oregon, France, New Zealand, Chile, Argentina, Spain and South Africa. There are also themed flights (sparkling, "South of the Border," "California Dreaming," "European vacation") and dessert wines. Most wines are available by the glass and bottle, and some by tap.

Non-wine lovers, fear not. There are several beers available by tap, can and bottle, including brews from Bay Area favorites Drakes Brewing Company, 21st Amendment Brewery and Lagunitas Brewing Company.

Partner James Laden has been a South Bay bartender for 20 years. He and Romero both also completed further wine education through the Wine & Spirit Education Trust (WSET).

There are also some small bites available to nosh on, from local crudités served with house-made lemon-garlic aioli ($8) to cheese and charcuterie plates ($10-$20). There are also salads ($7 and $9), paninis ($8 to $13) and three adult PB&J sandwiches (one comes with caramelized onion, gruyere cheese and peanut butter, $11).


"Calave (pronounced as if there's an accent over the second "a")"

Still not sure how to pronounce it. What kind of accent?

Report Objectionable Content
+  Like this comment
Posted by Elena Kadvany, education reporter of the Palo Alto Weekly,
on Jun 29, 2015 at 9:43 pm
Elena Kadvany is a registered user.


Mr. Recycle: That was my mistake; the emphasis is on the "e." Thanks!


And while we are on the subject, how do you pronounce your name, Ms. Kadvany:

e-LE-na like the street I grew up near, that connects Purissima to Natoma; or


Report Objectionable Content
+   3 people like this
Posted by Elena Kadvany, education reporter of the Palo Alto Weekly,
on Jul 1, 2015 at 8:27 am
Elena Kadvany is a registered user.


Cal-ave-AY, and my name is pronounced like it should be spelled "Elaina."

Report Objectionable Content
+   5 people like this
Posted by Remember literacy?, a resident of another community,
on Jul 1, 2015 at 10:57 am

This is a common problem lately in the United States. People choose names that clash with the common phonetics, yet fail to take steps that would remove the conflict (like a different spelling, or an accent). The effect is pretentious.


I can't believe all the talk about how it is pronounced. Have you all not figured out that it is named after its location? cal ave
I think it's a cool name. As it should be I went there yesterday and it's a cool spot!!

Report Objectionable Content
+   1 person likes this
Posted by Remember literacy?, a resident of another community,
on Jul 2, 2015 at 9:22 am


Come to mention it, I think I recall the "California Avenue" derivation being cited in an earlier blog.

A precedent in downtown Mountain View -- a popular café located at the junction of Castro St. and California St. -- is accordingly named Cascal, but that name posed no ambiguity because the phonetic pronunciation is natural and obvious.


While everyone argues over pronunciation, I'm heading over with friends to enjoy what sounds like a wonderful new addition to California Ave.


Ya'all crack me up! See you there

Report Objectionable Content
+   5 people like this
Posted by Cowper Fan, a resident of Menlo Park: South of Seminary/Vintage Oaks,
on Jul 4, 2015 at 1:22 am


If only Palo Altans were as concerned about the pronunciation of Cowper Street. William Cowper's family name was pronounced like Cooper. No wonder almost all the bookstores in Palo Alto have gone out of business.

Couples and Premarital: How Do You Define Love?
By Chandrama Anderson | 0 comments | 1,875 views

Please Keep Your Dog Off of the Merry-go-round
By Cheryl Bac | 2 comments | 1,818 views

Enter your best shots in the Peninsula Photo Contest. Open to anyone who lives, works or attends school within the 650 area code. There are both Adult and Youth divisions and six different categories to submit your digital images. Deadline for entries is March 22.