"With great sadness, we are closing the Borrone MarketBar," a message posted in the restaurant's window and on its website reads. "We are a family business, and our family situation at this time requires our attention." 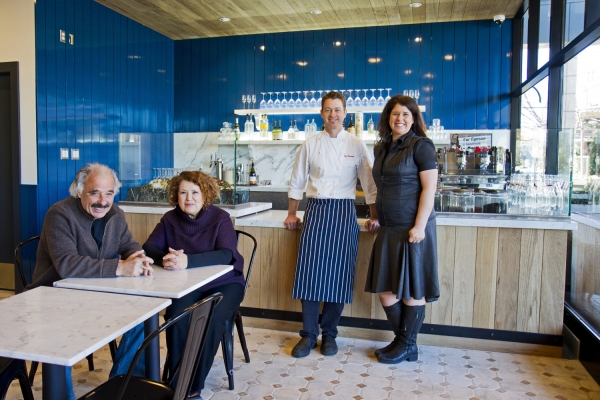 From left to right, Roy and Rose Borrone and Josh Pebbles and Marina Borrone at Borrone MarketBar on Jan. 22, 2014. Photo by Michelle Le/The Almanac.

The Borrone family took over the space next door to their very successful cafe after Italian restaurant Cedro Ristorante closed in early 2013. Roy and Rose Borrone opened the first Cafe Borrone in Redwood City in 1979 before moving to the Menlo Park location a decade later.

One of the five Borrone children, Peter, and his wife also run Vesta in downtown Redwood City, which specializes in handcrafted wood-fired pizza and small plates. The youngest Borrone daughter and her husband opened their own joint in 2010 in Woodside, Station 1, which has since closed. They said at the time they were planning on opening a bakery in Redwood City.

Read more about the history of the family and its local restaurants here -- Borrone MarketBar: An exciting addition to an old favorite -- plus a review of MarketBar -- The best of all worlds.

Shame that I never had a chance to try this place out. Best wishes to the Borrone family.

Report Objectionable Content
Posted by Dagwood, a resident of Menlo Park: Downtown,
on Jun 18, 2015 at 10:19 am


The MarketBar was a lovely space with excellent food and gracious staff -- Good luck to the Borrone family.


This sad news prompted me to post my first comment ever. We've been known to eat at the fabulous MarketBar two or three times a week. Loved everything about it?from dining al fuori (at comfy chairs & tables, amid charming lights & toasty heaters) to the welcoming servers to, most of all, the delicious and imaginative food. Yes, the pricing was a bit wonky (both +/-), but we figured they'd eventually work that out. Alas, that is not to be. MarketBar, we will miss you. Borrones, we wish you well.


That is too bad-- Marina and her family are very nice-- and talented!-- people. I sincerely hope they embark on another tasty endeavor soon.


FYI, Station 1 was not a "joint." It was a lovely dining experience with excellent food and wine.

How we eat away at our open space, even in Palo Alto
By Sherry Listgarten | 5 comments | 6,836 views